Is DACA deal headed for disaster? 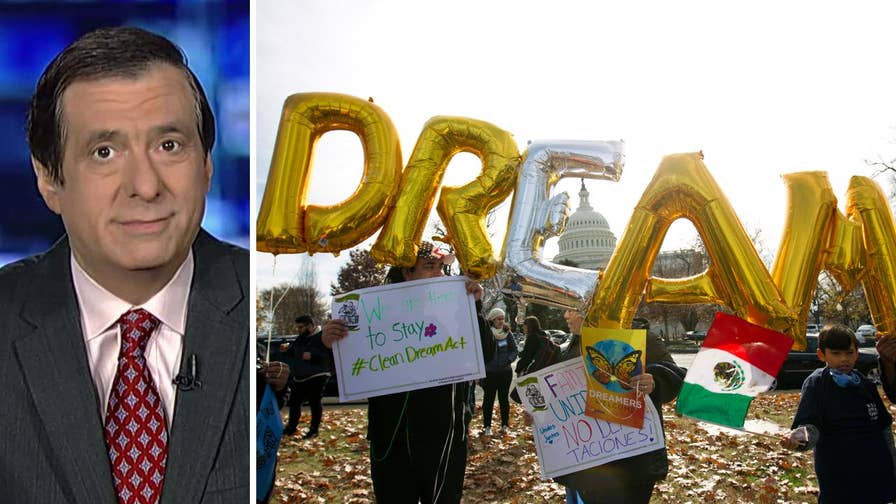 'MediaBuzz' host Howard Kurtz weighs in on whether there will be a Daca Deal as Trump denies racism, and blames Democrats for derailing Dreamers.

Will there be a DACA deal?

My sense is that both sides want one—but the chances are increasingly slim.

The Democrats may be less inclined to cooperate now that President Trump is on the defensive after global media criticism that he assailed "s—hole countries"—although the Washington Post, National Review’s Rich Lowry and others say aides are now insisting that the president said "s—house countries." Hole or house is a distinction without a difference, in my view.

The uproar prompted the president to tell reporters Sunday that "nah, I'm not a racist. I'm the least racist person you have ever interviewed, that I can tell you."

Trump also played down the notion of a DACA compromise, saying, "Honestly, I don't think the Democrats want to make a deal."

Democratic lawmakers want to save nearly 800,000 dreamers from deportation, but they’re not wild about pouring billions into Trump's border wall and taking other steps he's demanding on immigration.

Given the rhetoric from Dick Durbin and others that Trump was espousing racist views when he said he didn't want more immigrants from Haiti, El Salvador and Africa as opposed to Norway, the Democrats are less inclined to give ground. (Yes, this has gotten tied up with Friday’s government-shutdown deadline, but nobody thinks that will actually happen.)

And Trump got strong blowback from his base, before the "s" hit the fan, for his willingness to cut a deal on the dreamers. Conservative commentators, led by Ann Coulter, called his stance a betrayal and complained about "amnesty."

The White House initially chose not to deny the Washington Post report that Trump had said "s—hole." The president later said he had used "tough" language but not that exact word, and now the administration has moved to a more forceful denial. Durbin says Trump used the word several times, Republican lawmakers either dispute it or say they didn't hear it, but Lindsey Graham did admonish the president for his wording during the White House meeting.

Trump yesterday tweeted a whack at the Senate Democratic whip, who earned a dimunitive nickname:

"Senator Dicky Durbin totally misrepresented what was said at the DACA meeting. Deals can't get made when there is no trust! Durbin blew DACA and is hurting our Military."

Any immigration compromise was always going to be tough, given the raw emotions surrounding the issue. That's why both George W. Bush and Barack Obama failed to pass immigration reform, leading to Obama's executive order shielding the dreamers.

As Rand Paul said on "Meet the Press": "Both sides now are destroying the setting in which anything meaningful can happen."

We seem to be back at Washington's default setting, where gridlock rules and compromise is eternally elusive. The essence of a political deal is that each side accepts something it doesn't want—tougher border security and immigration limits versus leniency for those brought here illegally as kids—to obtain important benefits.

But emotions are running so high—against Trump, against Democratic leaders, about immigration itself—that the good will needed to do such deals seems to be evaporating.

Howard Kurtz is a Fox News analyst and the host of "MediaBuzz" (Sundays 11 a.m.). He is the author of five books and is based in Washington. Follow him at @HowardKurtz. Click here for more information on Howard Kurtz.

The post Is Daca Deal Headed for disaster? appeared first on Shareabler.

Is DACA deal headed for disaster?