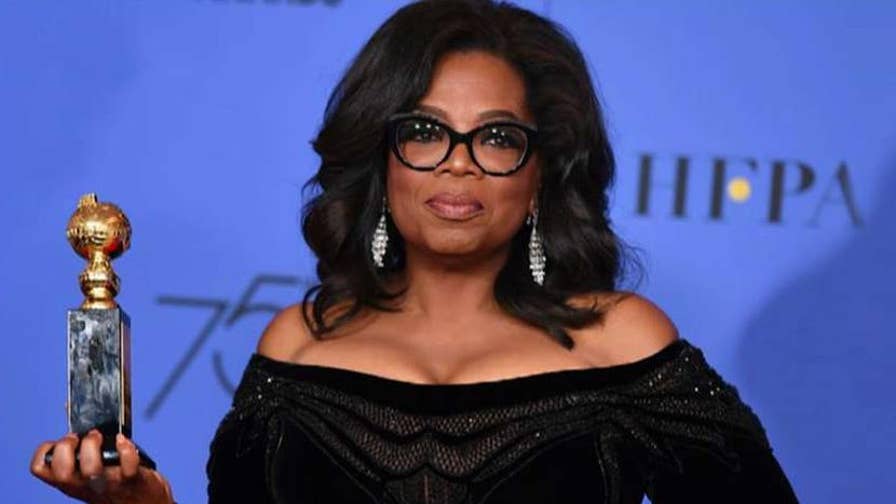 Trump responds to report Oprah may run against him in 2020

"CBS This Morning" co-anchor Gayle King might have to leave the program if her longtime friend and confidant Oprah Winfrey Runs for president, media watchers suggested Tuesday.

The two women have been good friends since they both worked at a Baltimore television station in their early 20s.

On Tuesday, CBS anchors Norah O'Donnell and Jeff Glor interviewed King about Winfrey’s plans on "CBS This Morning," without mentioning the close relationship between the two women.

King, who attended the Golden Globe Awards ceremony Sunday night and spent several hours with Winfrey afterward, said her friend was intrigued by the idea of a candidacy, but didn't think she was "actively considering" it.

King added that "there are people who have said they want to be her campaign manager, who want to quit their jobs and campaign for her."

GAYLE KING: 'I ABSOLUTELY DON'T THINK THAT HER POSITION HAS CHANGED'

Tim Graham, director of media analysis for the conservative watchdog Media Research Center, said King's job "is like having an Oprah press spokesperson on staff. She's helping Oprah milk the speculation for all it's worth."

"I have the right to change my opinion," added Cuomo, whose brother — New York Gov. Andrew Cuomo — has been mentioned as a potential 2020 presidential contender. "Does she have to leave? Maybe she does. I guess they could do the coverage in a way where she never handles it. But it would raise questions with people."

CBS will address the apparent conflict of interest if it becomes a problem, CBS News President David Rhodes said.

"It's difficult to be part of the news when you cover the news and she helped people understand what was going on with the story," Rhodes said.

King's insight is useful as long as chatter about Winfrey's candidacy is a parlor game and not reality, said Al Tompkins, an instructor in broadcast journalism for the Poynter Institute.

"The relationship between King and Winfrey is well known and viewers can filter what they hear from Gayle through that filter," Tompkins said. "If Oprah did run, it would be a tougher relationship to navigate. … Today, with so many people being so skeptical or cynical of what they see, hear and read in journalism, the cleaner we can keep the lines between journalists and politicians the better."

Mark Feldstein, a journalism professor at the University of Maryland, said CBS News would have to take King off campaign stories if Winfrey were to run. That could be awkward for the show's format; the three hosts often sit at a table and discuss stories or interview newsmakers together. (King and O'Donnell will soon be joined by John Dickerson, whom CBS named Tuesday as the replacement for Charlie Rose, who left "CBS This Morning" in November after allegations of sexual misconduct.)

"The public needs to be assured that the news they get is as objective as humanly possible," Feldstein said. "That obviously is not the case if an anchor is reporting on a close friend."

This post first appeared on Shareabler, please read the originial post: here
People also like
4 Very Important Reasons Why You Should Have IT Services for Your Business
Short Happiness Quotes From Famous and Unknown People
The Eight Wives of Henry VI society (EWH6)
Crackpot Cryptography and Security Theater
It’s Me – Chapter 27
How to Keep Him Interested in You Forever