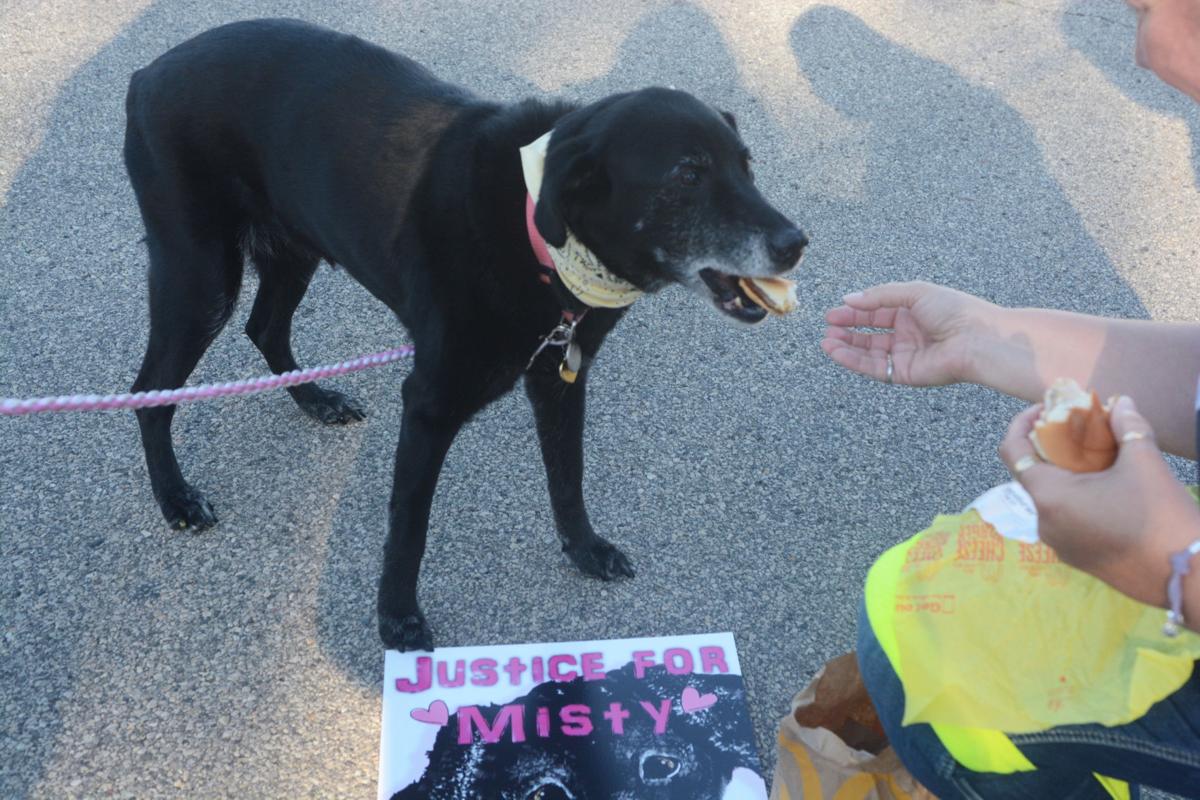 Cheeseburgers were among Misty's favorite foods — and a March for Misty participant in June 2016 is only too happy to share fast food with the 16-year-old Labrador retriever mix, who gained 18 pounds in foster care. Misty, whose story of abuse and recovery went viral worldwide, died from cancer in October 2016, after being placed in permanent foster care.

A rural Poynette woman, who in early 2016 bludgeoned a dog and left the animal for dead, may not live in a home that includes three dogs and two cats, a Columbia County Circuit Court judge ruled Thursday.

Terri Benson, 58, appeared before Judge Todd Hepler, who said employees of the county’s Probation and Parole office had asked for clarification of the conditions of her court supervision, stemming from her felony conviction. Benson pleaded no contest to one count of felony mistreatment of an animal. Charges of misdemeanor disorderly conduct and animal abandonment were dismissed.

The story of Misty — the black Labrador retriever who died, at age 16, in October 2016, while in the care of a permanent foster family — went viral. On Jan. 21, 2016, four teenage hunters found the dog in the French’s Creek Recreation Area in the town of Fort Winnebago.

The dog was in a zipped-up duffel bag; when the hunters saw the bag move, and saw vapor emanating from it, they called the Columbia County Sheriff’s Office. A veterinarian used 19 staples to close the dog’s head wounds.

Shortly after authorities announced the dog’s discovery, Benson, then of Pardeeville, turned herself in, identified herself as Misty’s owner, and said she’d attempted to put the dog down with hammer blows after it showed signs of being seriously ill.

Benson was sentenced in June to 120 days in jail, 3 years of probation and ordered not to own or possess any animals for 5 years.

Since her release, probation officials indicated, she has been living with a relative who owns the dogs and cats, but she is always supervised when she is in the presence of the animals.

Hepler said it was the Probation and Parole Office officials who wrote him a letter in late October seeking clarification on whether Benson’s living situation was in compliance with conditions of her release.

District Attorney Jane Kohlwey said the living situation is a violation of the court’s order.

Kohlwey said she’s not convinced that Benson always is supervised when she’s around the pets.

“It seems like her behavior in this case … could be very impulsive when in a stressful situation,” Kohlwey said.

Benson sobbed as she expressed remorse for what happened to Misty.

“I feel horrible about what I did,” she said. “I know it was wrong. I could never harm an animal again, I swear to God on that.”

Under the law, Hepler said, a person is “in possession” of something if they have access to it. He noted that felons who are ordered not to possess firearms have been forbidden from living in places where firearms are kept, even if the firearms do not belong to the felon.

“It is not required that a person own a thing to possess it,” he said.

Hepler also said there is a “practical problem” of providing 24-hour supervision to an adult.

Samantha Ehr of the Probation and Parole Office declined to comment as to what Benson might do in response to Hepler’s ruling.

Your notification has been saved.

There was a problem saving your notification.

Whenever Lyn Jerde posts new content, you'll get an email delivered to your inbox with a link.

Email notifications are only sent once a day, and only if there are new matching items.