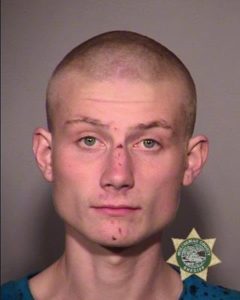 Alleged car thief, drug addict and Neighborhood menace David Michael Dahlen III, who has lived with his grandparents in Parkrose off and on since he was born, was arrested Sept. 11 and hasn’t been released. He’s been charged with six counts of possession of a stolen vehicle, six counts of unauthorized use of a motor vehicle, one count of theft, one count of assault and one count of criminal mischief. All are pending, with a trial set for Jan. 22.
COURTESY MULTNOMAH COUNTY SHERIFF’S OFFICE

SMDC Ties up with Lamudi
What Your Sexual Dreams Can Tell You
Tomcat Tompkins – Part 3
How to Prevent Payroll Frauds Using O…
Super Focused, Then Super Distrac… Oh…

A little tragedy can go a long way, especially when it’s shared on Facebook.

Since Anna and Adam Lutz moved their family to Parkrose in 2015, she’s had longstanding qualms with David Dahlen, her next-door neighbor who lives with his grandparents. She recognized a steady stream of strange cars ebbing and flowing out of his grandparents’ garage on Northeast Shaver Street at 105th Avenue. In addition, there were bizarre confrontations between Dahlen and Adam––a member of the local film community who would arrive home at odd, early morning hours to find an addled Dahlen in their driveway, prepared with loaded questions about Adam’s car and its parts––not to mention countless heroin needles sown into neighbors’ lawns. “It was like the David reign of terror,” says Anna. “He woke us all up in the middle of the night just driving around on his unlicensed moped. I don’t know how he made that thing so loud. The neighbors were calling the cops on him constantly. Every single night, he would have these huge brawls with his grandfather. His grandma went out of state for her annual summer trip, which I’m sure she extended, and his grandpa had to board himself in this summer.”

An ongoing time bomb, Dahlen’s delinquency culminated in unexpected terrain: alleged animal abuse. On Sept. 6, Lutz found Tita, her healthy dog, with a broken eye socket. The female boxer had been hit in the head with a blunt object, one which Lutz still can’t identify. The Lutz’s didn’t see Dahlen’s attack, but they know he did it. “David is the only person who could have beat our boxer because we saw him come out of his side door and walk towards his driveway which is parallel to our carport. We saw our boxer go trotting towards him barking. Seconds later she returned with a destroyed eye.” 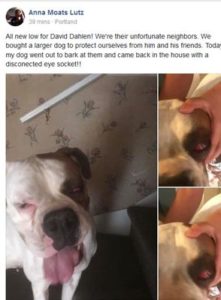 Dahlen allegedly attacked his neighbor’s dog, who lost an eye, and cost his owners more than $5,000 in veterinary bills. He has lived with his grandparents on and off since he was born. His trial date is set for Jan. 22.
COURTESY SEAN LECHNER

She mobilized, making her Facebook page public the day after the incident and commented, “Yesterday our dear family dog was brutally attacked while in our carport by my neighbor’s 21-year-old grandson, David Dahlen. He hit her so hard that we had to have her left eye removed in surgery last night at 11:45. He also broke her nose. Animal cruelty should never be an option. We have taken steps to have him prosecuted to the fullest extent of the law. Please SHARE; we need to get enough buzz going that law enforcement feels some pressure from the public to hopefully get him taken into custody and out of our neighborhood! PRETTY PLEASE, SHARE!”

Lutz’s wish was granted. In just over four months since posting images of her dog’s injuries, the pictures have been shared 154,000 times; more than 38,750 clicked the “angry” emoticon in reaction. Following the incident, Lutz lovingly referred to Tita as “Winky.” Ultimately, all Tita’s medical costs, which were more than $5,000, were covered through a GoFundMe page, thanks to local and international donations.

Yet this was not Dahlen’s only alleged crime. An accused thief-of-all-trades, he had been arrested many times before bludgeoning Tita; ironically Tita was initially adopted due to a police officer’s suggestion that a “scarier looking” dog might be key in warding off Dahlen from the Lutz property. Dahlen had already experienced many a run-in with the local police. Those cars flooding his garage were mostly stolen. “Over the last several years, motor vehicle theft has seen a dramatic increase. The North Precinct has actually seen the largest rise in motor vehicle theft, but east Portland has seen a significant increase as well,” says Sergeant Greg Stewart of the Portland Police Bureau. “The thefts are focused on late 1990s and early 2000s Hondas, Toyotas and Subarus. The thieves often use keys, which have been modified to work in multiple cars.” 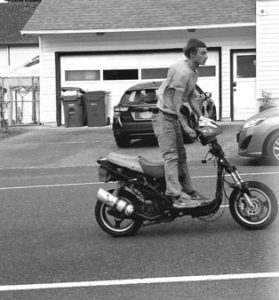 Besides running an alleged stolen car fencing operation and drug dealing enterprise out of his grandparents’ home and general neighborhood thieving, Dahlen finds other ways to disturb neighborhood peace and quiet, like speeding up and down neighborhood streets on his unlicensed, uninsured, cacophonous motor scooter at all times of the day and night.
COURTESY SEAN LECHNER

This method, as described by Sergeant Stewart, was instrumental in Dahlen’s madness. He created a multitude of keys that aided him in jacking various vehicles. According to a recent Willamette Week story, convicting a car thief in Portland is a fool’s errand. In November, the weekly paper reported that for 2017, Portland ranked third place in the country for car theft among major cities. With 6,000 cars having been stolen as of November, Portland is only outranked by Detroit and Baltimore.

Oregon isn’t doing much to alter its reputation. One potential Band-Aid, House Bill 2794, stalled in the 2017 session. HB 2794 would allow Oregon to catch up to sister states like California and Washington, which can prove guilt simply through one “being the possessor of the stolen vehicle coupled with ‘slight corroborative evidence.’” For example, if the thief is caught and has a faulty story about where they found the car, that can constitute an inference of guilt.

From there, juries could prosecute on a case-by-case basis. As it stands now, a car thief can avoid punishment if they are found in the car with stolen property, if they lie to the police, use an illegitimate key to operate the vehicle (as in Dahlen’s case) or if they simply say they were given the car by someone but they can’t remember this person’s last name or whereabouts.

According to Oregon law, theft of property worth upwards of $1,000 is a Class C felony, which could mean up to five years in prison and a fine of up to $125,000. So why, after Dahlen has been repeatedly caught and arrested for car theft, was he still out and about stealing cars? 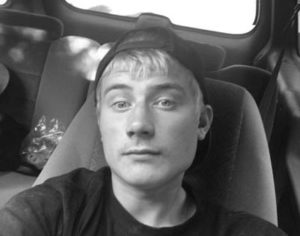 With parents reportedly unable to care for Dahlen on a regular basis due to serious drug addiction, Dahlen has lived with his grandparents on and off since he was born.
COURTESY SEAN LECHNER

In line with a KGW report from July of last year, the answer is simple (and distressing): car thieves are not being prosecuted. There’s a troubling gap between when people report a stolen car and when police find it. “A couple officers told me that they’re no longer allowed to do anything about stolen vehicles,” says Sean Lechner, who lives two doors down from the Dahlens in Parkrose. “The District Attorney’s office told them as of Sept. 1 that people like Dahlen would go out and steal cars, spend a night in jail and be back out on the street. It was frustrating for the officers. He [Dahlen] was habitual about it.”

Another explanation is prison overcrowding. According to The Portland Mercury, “matrixing,” the process of prematurely booting inmates to make room for new inmates, became commonplace last summer. Sheriff Mike Reese reported to KATU News last summer that “a recent reduction in jail space has led to a critical problem with overcrowding.” The Multnomah County Jail was at 95 percent capacity four times between July 1 and July 25. It was at 90 percent capacity the rest of the time.

But after Tita’s surgeries, Lutz decided enough was enough. “When he hit our dog, I was like ‘Okay, I can get enough people to make a loud enough noise to get an Assistant DA to make it so he doesn’t get out of jail this time and they’ll hold him until his trial,” says Lutz. “I started going on all our social medias. We heard from people from England to Australia.”

Lechner was instrumental in working with police. He became acquainted with the Assistant District Attorney assigned to Dahlen’s case through the Public Safety Action Committee, which he was referred to by Parkrose Neighborhood Association’s Annette Stanhope.

Each time he would see a new car in front of the Dahlen residence, he would send photos of its license plates directly to police. Dahlen, for his part, caught on and would change out the plates. “It wasn’t just car theft; he was stealing anything and everything, especially related to power tools,” says Lechner, who set up a trail camera to catch Dahlen in the act. “I personally recovered a stolen laptop and cellphone from him. A gal was walking around our street trying to find her stolen device [with the Find My iPhone app], and I looked at David’s house and told her, ‘I bet it’s over there.’ I recovered it, and an officer came and retrieved the items.”

Finally, on Sept. 11, Dahlen was arrested for car theft––and he’s remained in custody since. Dahlen’s sustained arrest has been music to his neighbors’ ears, who have finally been granted quiet. They no longer fear for their property, pets or sleep patterns.

Silver lining
Though Dahlen is just one of many stories that make up a growing statistic, it’s also a tale that tells of a successful, peaceful community uprising. People display compassion to a point where an arrest can bring them together. “Neighbors, the police department and DA have come together to solve this particular case, which is part of a bigger initiative to drive down car thefts in Portland,” says Mingus Mapps of Historic Parkrose.

Dahlen was set to stand trial in December, but his trial was postponed, once again, until Jan. 22.

As for Lutz, she sympathizes with Dahlen, even as she fathoms her neighborhood’s success. “We’ve all given him so much patience. We’re like, ‘David, you’re obviously really smart, it’s impressive what you’ve done, but decide you want to have a good future and put your innate talents towards having a good future,’” says Lutz. “What is lingering is that all of us neighbors are closer friends, and we lean on each other more. There are some neighbors I could have lived here another five years and never met—if not for Dahlen.” n

SMDC Ties up with Lamudi

4 Easy Steps to Take When Buying a House