However, despite criticism, Navjot Sidhu has expressed hope that ties between the two countries will improve during Imran Khan’s stint. He said that Pakistan’s military and political leadership was inclined towards improving ties with India.

BJP has demanded that Congress President Rahul Gandhi that he should act against Sidhu for his behavior in Islamabad. Government of India doesn’t recognize Masood and holds no elected Indian representative should share a platform with PoK President. 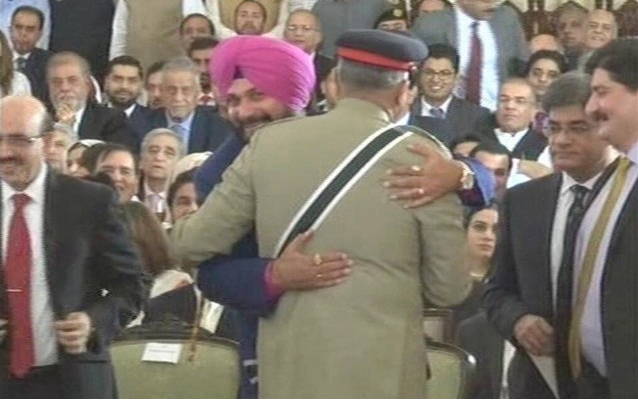 Navjot Singh Sidhu, immediately reacted for BJP’s allegations and clarified saying, “Bajwa came to me and said we were thinking of opening the Kartapur route on the 550th birth anniversary of Guru Nanak Dev”.

Earlier, while talking to Pakistan’s state run PTV, Sidhu used his usual poetic expressions to prais Imran Khan and hoped that his accession to the PM’s position will be good for the India-Pakistan peace process. He said, “A new morning is here in Pakistan with a new government which can change the destiny of the country.”

India and Pakistan have held no substantive dialogue since December 2015 when Sushma Swaraj, the External Affairs Minister visited Islamabad for a multilateral conference.

Imran Khan, while addressing the nation, after getting highest number of seats in National Assembly, made it clear that Kashmir remained the core issue for Pakistan and mentioned the alleged human rights violations by Indian forces in the Valley. Government of India believes that the Pakistan Occupied Kashmir (PoK) is under illegitimate control of Pakistan as it is, like the rest of Jammu and Kashmir, an integral part of India. 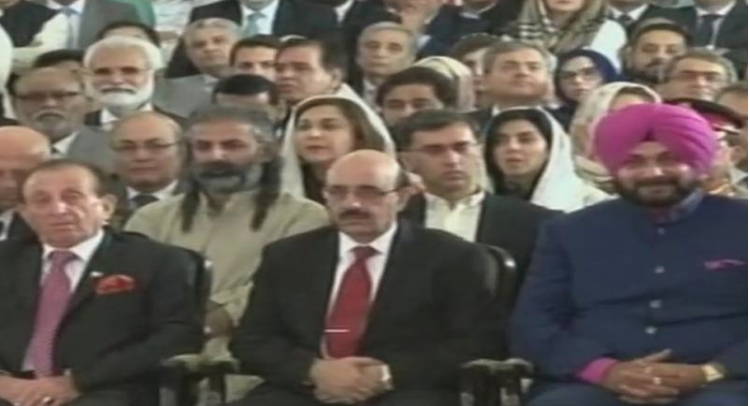 On his arrival in Lahore, Navjot Singh Sidhu had reportedly said that Imran Khan should come forward in a peace initiative between the two countries. He said that he brought “a message of love” to Pakistan as a goodwill ambassador of India. “I have come here not as a politician but as a friend. I have come here to take part in he happiness of my friend (Imran).”

Read More: Imran Khan: No Foreign Dignitaries to be invited for Oath Ceremony

BJP activists had protested against Navjot Singh Sidhu in Ludhiana on Saturday for his decision to visit Pakistan to attend the oath-taking ceremony of Imran Khan as Pakistan’s Prime Minister. One of the protesters leader reportedly said,“How could he attend Imran Khan’s oath-taking ceremony and hug Pakistan’s Army Chief being Punjab’s cabinet minister when India is mourning the death of former PM Atal Bihari Vajpayee”. They demanded explanation from the Congress party.  Haryana Minister Anil Vij called it “an act of disloyalty”.

Two days before Sidhu’s visit to Pakistan, Subramaniam Swami, senior BJP leader had advised him not to visit Pakistan. He even said that Sidhu has lost his mental balance. This had indicated that BJP will use any opportunity to criticise Sidhu’s participation in Imran Khan’s oath ceremony.

While speaking to an Indian TV channel from Islamabad on Saturday evening, Navjot Singh Sidhu thanked Pakistanis for giving him love and respect. He expressed hope that Imran Khan would improve relations between the two countries. He said that Pakistani leaders including Imrah Khan have expressed their willingness to improve ties with India.

Imran Khan had also invited former Indian cricket captains Sunil Gavaskar and Kapil Dev and cine star Salman Khan for the oath ceremony. However, Sidhu chose to go across and attend the event.