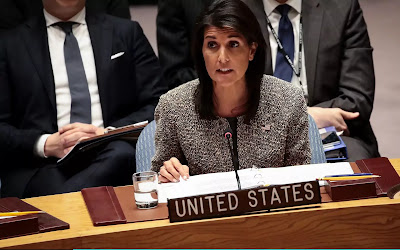 A senior US official has cast doubt on the US team attending the Winter Olympics in South Korea, in comments which were described as “an insult” to Seoul.
US Ambassador to the United Nations Nikki Haley said it was an “open question” whether US athletes would attend the February games, which are being held amid heightened tensions over North Korea.

What would happen to a modern-day Mos…
Thrilling Guided Tours on Bicycle of …
Daebak – Korean Lifestyle goods strai…
The Best Romantic Honeymoon Destinati…
Crime Tourism: Bringing Burglary Crew…
Asked if it's a "done deal" that they will attend, Ms Haley told Fox News: "There's an open question. I have not heard anything about that.
“But I do know in the talks that we have, whether it's Jerusalem or whether it’s North Korea, it's always about how do we protect the US citizens in the area.”
Richard Bitzinger, a military expert at the S. Rajaratnam School of International Studies in Singapore, said there could be a case for protecting US athletes from attacks by North Koreans special operation squads who might infiltrate the games.
“But that implies that our South Korean allies aren't up to the job,” he told The Telegraph. “Basically an insult.”
The Winter Games begin on February 9 in the South Korean city of Pyeongchang.
Simmering tensions have increased in recent days after North Korea fired its most advanced intercontinental ballistic missile last week before the US and South Korea began massive joint drills on the peninsula.
It was announced earlier this week that Russia would be banned from attending the Winter Games after it was accused on manipulating anti-doping rules.
Ms Haley did express hope that US athletes would be in attendance, saying: “What have we always said? We don't ever fear anything, we live our lives. We use our freedom.
“And certainly that is a perfect opportunity for all of them to go and do something they have worked so hard for.”