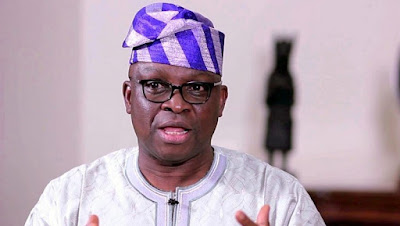 Governor of Ekiti State, Ayodele Fayose, has advocated the conduct of primary election among national chairmanship Aspirants in the Peoples Democratic Party (PDP) in the Southwest geopolitical zone, so as to have a solid front in the national convention scheduled for December.

Giantmouse GMF
Have you ever made love in front of o…
Deck Out Your Backyard: Landscape Des…
The Queens of Pop: In The Mix
30 Cheap & High ROI Home Renovations …
He stated this Saturday night when former Governor of Ogun State, Otunba Gbenga Daniel, visited him at the Government House, Ado-Ekiti.
A press release by Fayose’s Chief Press Secretary, Mr Idowu Adelusi, quoted the governor as saying that presenting one contestant would brighten the chances of the zone in clinching the position at the national convention of the party.
“We need to get a consensus candidate from our zone to clinch the post. We should not go to the convention a divided house. I see nothing bad if we get all the delegates from the Southwest to vote in a shadow election for their preferred candidate. Then whoever emerges would be supported by all during the convention.
“If we propose that and majority of the aspirants agree, whoever does not agree would be seen as having no follower at all. I can’t work against you or your interest.
“We have too many aspirants from our zone and it is not only us that will decide who becomes the national chairman of our party, it will be decided by every member from across the country.
“As for my position as the Chairman of the PDP Governors’ Forum, I am only a voice there. Agree that the governors will play a crucial role in determining who wins, but if I say something, I can’t force it down the throats of my colleagues.
“It is only advisable that we get our house in order. All the aspirants from our area, apart from dividing the votes in the region, are also dividing the votes in the North too. We all know that our party is the party to beat in the country”, he said.
Governor Fayose also assured that he would never work against the interest of Daniel, any aspirant in the zone or the zone itself.
In his remarks, Otunba Daniel, a chairmanship aspirant, said he has all it takes to lead the PDP.
“Majority of the aspirants only have the experience of being political appointees. I have contested and won election twice. As a governor, you know what it is to contest and win elections. I have traversed all the nooks and crannies of this country and I am well accepted.
“Our great party needs somebody like me who has the contacts and the experience to lead it. We are going to contest against incumbents in many states and even at the presidential level, so, we must be up and doing.
“I am assuring our members that I will lead the party to victory in the coming elections,” he said.
Answering reporters’ questions later, Daniel said he was in support of Governor Fayose’s suggestion of a primary among the aspirants from the zone.
“It is a good idea and if our party leaders and members support it, I am ready for it,” he noted.