How Trump can squeeze North Korea -- without a war 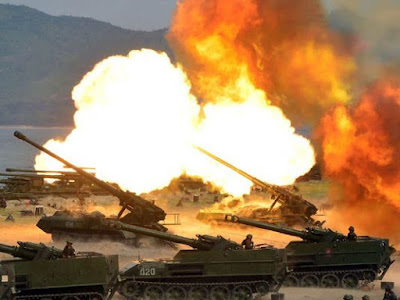 Secretary of State Rex Tillerson heads to New York Friday to pressure the United Nations Security Council to increase economic pressure on North Korea to end its nuclear weapons program.
A "major, major conflict" with North Korea is a possibility for the U.S., but the White House is trying to come up with diplomatic solutions, President Trump told Source Thursday.

Here are a few ways that could happen:
Report: Trump warns of 'major, major conflict' with North Korea

Tighten enforcement of existing U.N. Security Council sanctions. The latest sanctions resolution passed by world powers in November was touted as the strongest ever, but the State Department and analysts say those measures have yet to be fully enforced.
The sanctions limit North Korea’s sale of conventional weapons, coal and iron ore, especially if revenue would benefit its nuclear or ballistic missile programs.
China and other countries in Africa and Southeast Asia are plainly not implementing all these sanctions,” said Anthony Ruggiero, a senior fellow at the Foundation for Defense of Democracies, a think tank in Washington.
Some of those countries need help from the West to screen for complicated financial arrangements designed to hide North Korean involvement, and others are simply not interested in implementing the sanctions because they benefit from cut-rate North Korean pricing, Ruggiero said.

The U.S. could start publicly calling out companies involved in North Korea's weapons programs, such as two Chinese trucking companies that provided or helped build large vehicles that North Korea uses to transport, erect and launch its missiles, said Richard Fisher, a China and Korea analyst at the International Assessment and Strategy Center.
The China Aerospace Science and Industry Corporation and the China National Heavy Duty Truck Group or Sinotruk, have provided trucks or large missile carriers that North Korea uses to transport missiles aimed at U.S. forces in Asia, Fisher said. The vehicles were displayed in an April 15 military parade, where North Korean leader’s Kim Jong Un’s forces showed off their capabilities and intentions to develop intercontinental ballistic missiles able to reach U.S. cities.
In order for those trucks to carry the missile, the missile company has to be involved," Fisher said. "We should have no problem demanding that the Chinese take back all these large 16-wheel transporter erector launchers."

U.S. intelligence officials could expose companies involved in helping North Korea obtain the capacity to produce lithium-6, a substance that is crucial for the development of thermo-nuclear weapons — hydrogen bombs and boosted atomic bombs — that produce a far more powerful blast than mere atomic bombs, Fisher said.
According to a March 17 report by the Institute for Science and International Security, citing government sources, North Korea arranged in 2012 to purchase industrial equipment and materials in China, including mercury and lithium hydroxide. Those substances have civilian as well as military uses, but together indicate an effort to produce lithium 6 for weapons, according to the ISIS report.
That means the Chinese government approved the transfer of technology to manufacture thermonuclear weapons to North Korea, Fisher said.
It’s simply inconceivable that the Chinese government would have allowed the transfer of this kind of technology without multi-level approval up to the Chinese Communist Party politburo,” he said. “Only when these leaders are identified and given the international opprobrium they deserve will they even bother to consider changing their policies.”

This “slave labor,” Ruggiero said, has been used to build World Cup facilities in Qatar and St. Petersburg, Russia, in the Russian logging industry, and in Kuwait, and generates $500 million annually for North Korea.
Tillerson should seek a change to the resolution's permissive language to an outright ban, Ruggiero said. He should seek a new resolution that cuts off North Korea’s access to revenue streams from laborers, and to counter illicit activities such as cyber bank heists and drug trafficking, Ruggiero said.

The U.S. could bypass the Security Council and impose its own sanctions. The Trump administration could develop a multi-national coalition to cut off revenue to the North Korean government, like the Obama administration did to counter Iran’s nuclear weapons program.
The U.S. and its allies should issue arrest warrants for senior company officers in China and other countries who participate in military assistance programs that benefit North Korea, and seize their assets, Fisher said.
They could start with targeting individuals, companies and financial institutions who did business with the Dandong Hongxiang Industrial Development Company, a Chinese firm named in U.S.

Sanctions issued in September, or citizens of China, Russia, Vietnam and Cuba who worked with North Koreans named in sanctions issued on March 31. The two sets of sanctions targeted Chinese and North Koreans alleged to have raised money to fund illicit North Korean proliferation activities.
The Dandong Hongxiang company (and four of its officers) is sanctioned, but 22 front companies are not and no banks were sanctioned in the recent action," Ruggiero said.

The U.S. Treasury could cut off access to the U.S. financial system for banks, companies and individuals anywhere in the world who do business with North Korean entities. That would shut down North Korea’s missile and conventional weapons sales, which represent 40% of the nation’s economy, said Bruce Bechtol, a political science professor at Angelo State University in Texas and an expert on North Korea.
A financial dragnet that covers all foreign intermediaries working on North Korea’s behalf, including banks involved in money laundering, front companies and foreign individuals who establish bank accounts in return for financial kickbacks “would bring North Korea to its knees,” Bechtol said.

How Trump can squeeze North Korea -- without a war