Here's what's happening at the state Capitol this week 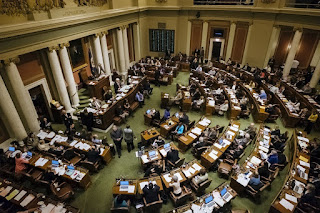 Minnesota lawmakers return from their spring break Monday with plenty of work to do in the remaining six weeks of the 2018 legislative session.

This week's agenda includes a House committee hearing on issues related to the troubled licensing system known as MNLARS ((Minnesota Licensing and Registration System)). It was prompted, in part, by last week's MPR News story about an investigation into the fired state worker who headed up the troubled project.

Two House committees, transportation and state government, have a joint hearing scheduled Tuesday. Lawmakers have questions about the investigation and report that they learned about last week.

The report, completed in February, provides extensive detail about the problems that started when MNLARS went online last summer and some of the key missteps that led to those problems.

The investigation was focused on Paul Meekin, and the report criticizes him for not addressing known defects prior to the system launch. But lawmakers want to know who else was involved and whether other personnel changes have been made.

House Transportation Chair Paul Torkelson, R-Hanska, said he also wants to know more about the Department of Public Safety spending on a call center related to MNLARS complaints. He and other Republicans left that project out of the $10 million funding measure they passed last month. He said lawmaker want an update Tuesday on how that $10 million is being spent. There are also questions about some office remodeling at Minnesota IT Services.

Legislation related to elder abuse is also on the agenda this week.

The House Health and Human Services Finance committee takes up one of the bills Wednesday. Rep. Deb Kiel, R-Crookston, is proposing a package of changes, including tighter regulations for care providers and improvements to the reporting and investigation of abuse allegations.

Gov. Mark Dayton has his own proposal that he rolled out last month. The governor's plan will be heard by the Senate Human Services Reform committee Monday afternoon.

The Senate Education Finance committee takes up some proposals Monday related to school safety. There are several bills this session aimed at helping school district make security improvements to buildings. There is bipartisan support for doing something this session, but there are differing approaches to the funding.

Taxes remain the biggest challenge left of the session. Lawmakers want to get the state tax code lined up better with all the recent federal changes.

Dayton put out his plan for helping middle-income taxpayers. But he did not provide the same help to businesses, which is a priority for Republicans. Dayton is also pushing to repeal some of the changes made in last year's tax bill, including cuts for tobacco, business property and estates. Republicans oppose those changes.

Here's what's happening at the state Capitol this week