Some people remain unaccounted more than a day after an intense fire destroyed a wing of a Chester County, Pennsylvania Senior Living Community, a high level source tells NBC10.

The late Thursday blaze forced 150 residents and staff into the frigid night and sent 27 residents to the hospital — 17 of whom are still under the care of doctors, officials said.

Ways to Style a Small Living Room
Holcim Philippines shares contributio…
Music Profile: Crissi Cochrane - Soul…
How to Get Rid of Ants
“The Friend Who May Not Seem a Friend…
Investigators with the Bureau of Alcohol, Tobacco and Firearms (ATF) are expected to enter the smoldering rubble sometime Saturday, the first time since the fire began that they will search inside.
The five-alarm fire broke out in the personal care section of the Barclay Friends community on the 700 block of North Franklin Street in West Chester. Staff evacuated vulnerable residents on foot, in wheelchairs and even in beds, wrapped in blankets.
Residents were triaged on a neighborhood street, then transported to a number of different shelters on ambulances and school buses.

Seniors Flee Inferno at Chester Co. Senior Living Community
Authorities poured over residents lists to check that everyone is accounted for, but at a 3 p.m. news conference Friday they would not answer that question.
"Our first priority is to track down and determine that we can account for everyone," ATF Special-Agent-in-Charge Don Robinson said.
Still, a high level source involved in the investigation told NBC10 that some people are missing, but cautioned that it's unclear if they left shelters with family or friends.
It was around 10:45 p.m. Thursday when smoke and flames first appeared in the personal care area of the facility. Employees rushed into residents' rooms and began ushering them to safety.

People at the scene described a frightening rescue from the inferno with some neighbors rushing over to help.
"I'm just envisioning the elderly people burning in their beds because it was so massive... before any rescue came," neighbor Scott Baker said.
With tears in her eyes, staffer Nellie Mingey said she was worried about the residents that she had come to know over three years working at Barclay Friends.
"It's sad," Mingey said. "This is their home. A lot of them don't have anywhere to go."
Parts of the community continued to burn Friday afternoon preventing investigators from searching the complex or determining how the fire started, officials said.
The fire burned so intensely that one firefighter reported feeling his helmet begin to melt, officials said.
Fire Sweeps Through Pa Senior Living Home 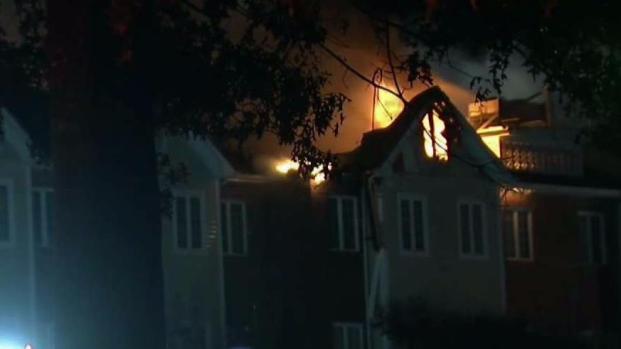 Seniors were evacuated into 40-degree weather and some were sent to local hospitals when a 5-alarm fire erupted at a senior living home in West Chester, Pa. Thursday. NBC10 News' Katy Zachry and Dray Clark report.
Unhurt residents were reunited with friends and family at nearby shelters, including one at West Chester University. The American Red Cross of Southeastern Pennsylvania had moved everyone from the West Chester shelter to specialized health care facilities and closed the shelter by late morning.
"They're cold, they're scared, they're anxious, they wanted to get out of here, so we're glad to have gotten them out," registered nurse Noreen Cibley said.
Neighbors rushed to the scene as well to help comfort evacuees. One woman who lives within a mile of the scene said she called a first responder friend as soon as she saw the flames, then rushed over with donations from Wawa of coffee and water for the overwhelmed evacuees.
"Everyone seems OK, but they are tired," the neighbor said. "They look really, really exhausted. They've had a long night."

A look at the smoldering senior-living community Friday morning.
Photo credit: SkyForce10
Barclay Friends, a Kendal Affiliate, is a senior living community that provides professional nursing staff 24 hours a day, meals and other services, according to its website.
The nursing home section of Barclay Friends was put on a "provisional license" last November by the Pennsylvania Department of Health (DOH) because of the citations, and fined $9,750 in April, the state said.
Firefighters warned people in the area to expect traffic troubles in the area of Franklin Street and Goshen Road as roads in the area remained closed Friday as more than two dozen ATF agents led the investigation into the blaze.
A team of national ATF investigators plan to enter the burned out complex on Saturday with the hope of collecting evidence.
Full Article & Source:
Flames Rip Through Chester County Senior Living Community Displacing 150 Residents and Staff, Hospitalizing 27