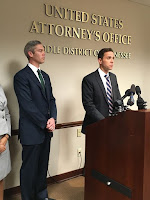 NASHVILLE — The federal government on Tuesday filed criminal charges against a Tennessee judge, alleging he tried to bribe a woman to recant her allegations against him.

The chains around Moreland's ankles, clanking on a tile floor, could be heard even before he was led into the courtroom. U.S. Magistrate Judge Joe Brown read the possible penalties Moreland is facing, including a maximum 20-year prison term.

"Do you understand what you're charged with and the possible punishment?" Brown asked.

"Yes sir," Moreland replied, seated in a button-down and khakis next to his lawyer, Peter Strianse of Nashville. Asked for comment as he was leaving the courtroom, Moreland did not respond.

Moreland will next appear in court Friday afternoon for a hearing to determine if he will remain in custody pending trial.

Moreland, a judge since 1998, was the subject of an FBI investigation related to allegations that he helped people he knew in exchange for things — including sexual favors, travel and lodging. Among the allegations documented in police reports and accounts were that he intervened in a traffic stop for a woman he had a personal relationship with and waived jail time for his future son-in-law.

According to the U.S. Attorney's Office, Moreland tried to pay a woman thousands of dollars to recant her allegations against him. That occurred after March 1, more than one month after the FBI began an inquiry.

"The allegations set forth in the indictment set forth egregious abuses of power by a judge sitting here in Nashville," Smith said in a statement.

A criminal complaint based on an affidavit of FBI Special Agent Mark Shafer lays out the investigation, which used confidential sources who are unnamed in the complaint.

Photo of money used in a bribery attempt by Judge Casey Moreland, according to federal officials (Photo: Shelley Mays / USA Today Network - Tennesseee)
A man, who initially lied to FBI agents about his role, later said he had schemed with Moreland.

According to the affidavit, that man said the judge was concerned their calls were being monitored, so he purchased for the judge a “burner phone,” a temporary cellphone that is often associated with criminal activity.

On March 11, while the confidential source was working for the FBI, he met with Moreland. In that meeting, the man told the judge he had met with a woman making public allegations against Moreland and that she would sign an affidavit saying she had lied.

The meeting was recorded, according to the FBI, and during it Moreland handed over the draft affidavit, $5,100 cash and an explanation.

“This right here gets me out of trouble,” Moreland said, according to the FBI documents. Federal officials say Moreland instructed the man to get the woman "liquored up real good" before asking her to sign the affidavit.

After being told the woman wanted to make changes to it, Moreland handed over another $1,000 to sign it as-is, federal officials said.

Moreland also discussed a plan to have drugs planted on the woman, and then discovered by police during a traffic stop he would orchestrate, according to the complaint. Federal officials said the goal was to destroy the woman's credibility.

Also Tuesday, as the charges were being announced, Metro Councilman Jeremy Elrod filed a resolution calling for Moreland's resignation. And Mayor Megan Barry said resigning would "seem to be in the best interest" of residents who depend on the integrity of the courts.

"Nashville deserves to have absolute trust in our judiciary, and Casey Moreland, based upon the allegations in the federal complaint, seems to have clearly violated that trust," Barry said in a statement.

Moreland is one of 11 General Sessions judges in Nashville. Each earns $170,000.