Widowed and disabled after a lifetime of New York factory work, including decades making baby dolls with glue that proved to be toxic, Alejandra Negron depends on a little help for nearly every step she takes. For years, she has had just enough help to stay safely in her own tidy one-bedroom apartment in Manhattan, despite pulmonary disease, asthma, diabetes, arthritis and a heart condition.

64 Awesome Things to Do in Costa Rica…
How come so many Christians don’t rea…
When does Botox Kick in for Your Pati…
30 Epic 50s Hairstyles for Men That A…
Why PPE Is Crucial for Health and Saf…
Medicaid, the state and federal health care program for the poor, covers the cost of a home-care aide during the day, and Ms. Negron’s two daughters and a granddaughter take turns staying over at night and on weekends, despite their own jobs and family obligations.
But last winter, that carefully stitched web of caregiving was abruptly torn apart by a call from Senior Health Partners of Healthfirst, a managed care insurance company that has been one of the beneficiaries of Medicaid’s overhaul of long-term care for disabled and aged people in New York.
The company informed Ms. Negron that her home care was immediately being cut to 25 hours a week from 50, and her aide, the mother of a 7-year-old, was rescheduled to work from Thursday through the weekend, not Monday to Friday.
“I panicked,” Ms. Negron’s daughter Carmen Hernandez said, recalling the scene she found at her mother’s apartment that day. The aide was in tears, and Ms. Negron, 72, was petrified that she would have to go to a nursing home. “My mother said, ‘If you put me in a home, I’m going to commit suicide.’”
“I started to cry,” Ms. Hernandez added. “I didn’t know what to do.”
Now a detailed report by a coalition of more than 100 nonprofit groups shows that the crisis in Ms. Negron’s family has been repeated in hundreds of households covered by Senior Health Partners. Since January 2015, that company and at least two others have been systematically cutting the hours of home care for their disabled clients, typically without proper notice or legal justification, the study found. By law, only a change in a client’s medical condition or circumstance is supposed to allow a reduction.
The study was co-sponsored by Medicaid Matters, which is an advocate for Medicaid beneficiaries, and by the New York chapter of the National Academy of Elder Law Attorneys. It independently confirms similar allegations made earlier this year in a federal class-action lawsuit filed against Senior Health Partners and the New York State Health Department on behalf of disabled and aged clients threatened with cuts in home care. And it echoes the patterns explored in articles in The New York Times about the pitfalls of managed long-term care, which beginning in 2012 replaced a fee-for-service system with a flat rate for each patient enrolled, regardless of how much care was provided to them.
The flat rate “creates a perverse incentive” for Senior Health Partners, the lawsuit says. “The less care they provide to each individual, the more they earn.”
Between June 2015 and December 2015, the study found a sixfold increase in hearings that challenged home-care reductions. In more than 90 percent of those 1,042 hearings, the companies lost or simply withdrew proposed cuts when challenged. Though Senior Health Partners is only one of more than 20 such plans in New York, serving about 12 percent of managed long-term care clients, it accounted for 56 percent of those hearings.
Not counting settlements, managed care companies prevailed only 1.2 percent of the time. But the report said that many of the most vulnerable clients had no way to fight cuts, unaware that they could appeal. And even those who prevailed at hearings have often faced new cutbacks, said Elizabeth Jois, a lawyer at the New York Legal Assistance Group.
That was what happened to Ms. Negron, who is one of the named plaintiffs in the lawsuit. Her daughter turned to Ms. Jois, who appealed. When Ms. Hernandez, 54, showed up at the hearing to testify for her mother, taking time off from her job as the newborn screening coordinator at Mount Sinai Beth Israel, the company withdrew its proposed reduction.
But in May, despite its own finding that her mother’s condition had worsened, the company cut her mother’s hours of care to 40 from 50. At a hearing last week, Ms. Hernandez was astonished when the company’s lawyer argued that her mother could urinate or defecate in a “pull-up” diaper and wait in a chair for two or three hours until a family member could leave work and come to change her.
Photo 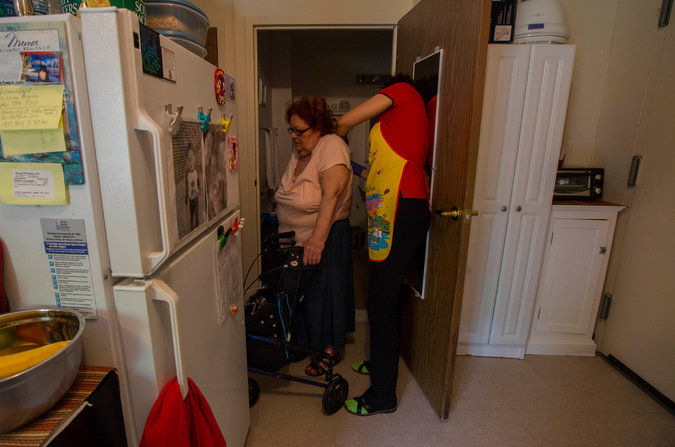 Amnys Pena, a home-care aide, with Ms. Negron on Monday. Senior Health Partners has tried to reduce her hours of care. Credit Hiroko Masuike/The New York Times
The decision is pending.
Senior Health Partners, which calls itself “a not-for-profit managed care organization sponsored by some of the most prestigious and nationally recognized hospitals and medical centers in New York,” said it could not discuss pending litigation.
“Senior Health Partners’ primary concern at all times is the health and well-being of all our members, who are among the most vulnerable citizens of New York,” it added in an emailed statement.
The State Health Department initially declined to respond to the report’s findings, citing the litigation, but then issued a general defense of managed long-term care. It pointed to a survey in which 87 percent of all members said their plan was good or excellent, and it said that members could change plans.
But advocates said most plans shun anyone with many needs and are reluctant to increase hours for patients who need more. The Legal Aid Society is preparing its own litigation against Senior Health Partners on behalf of a woman who is in a wheelchair and whose request for more hours of help was repeatedly denied, even after she was seriously injured in a fall, said Patricia Bath, a spokeswoman for Legal Aid.
That client’s experience reflects Senior Health Partners’ pattern of denying requests for more home care hours, Ms. Bath added, citing a Legal Aid review of more than 135 state decisions issued in the past year for people appealing such denials. Senior Health Partners’ denials have been overturned 80 percent of the time, she said.
At Ms. Negron’s apartment, Ms. Hernandez fought back tears.
“It’s like mental torture,” she said, as her mother dozed after a breathing treatment. “I don’t want her to be by herself if her last breath comes.”


This post first appeared on National Association To Stop Guardian Abuse, please read the originial post: here
People also like
64 Awesome Things to Do in Costa Rica, Where to Stay, Know Before You Go
How come so many Christians don’t really know God?
When does Botox Kick in for Your Patients?
30 Epic 50s Hairstyles for Men That Are Popular Again
Why PPE Is Crucial for Health and Safety in the Workplace
The Friday Roundup – Music Choices, Script Ideas and B-roll
Redmi Watch 2 Lite Review: An Affordable Smartwatch Worth Your Money