Fall is in full swing and we've lost most of the colored leaves that we were seeing just a month or so ago.  Since we're very close to one of the big holidays of the season, how about adding some of that autumn Color back just for this Friday morning?  That's what we've done for Cramer Imaging's featured "Photo of the Week."

Seven WordPress Themes For Any Online…
Koan #6
I was nervous about switching therapi…
Romantic Interior Design
How to Start Your Profitable Online B…
The most common color of fall leaves, other than brown, is yellow.  Can you imagine how delighted I was to see some other colors available to shoot just outside my door?  They just had to be photographed.

I took this photo a couple of years ago when the leaves had changed color for the year.  This photo ended up being the best but the sky was overexposed and the leaves were underexposed.  It was very disappointing since I didn't yet know how to properly correct for that without making the photo look really bad in the process.

It sat in my list of failed photos for a while.  I continued with my study of photography and post-processing in the mean time.  I even forgot about it for a while.

After my skills improved and I felt the need to go clean up my computer of excess useless files, I rediscovered this photo and decided to give it a try with some new techniques I had learned since taking the photo.  Those new techniques did the trick and I was able to even out the lighting on the backlit photo so that it now looked properly lit.

I don't know what the exact name of the plant is.  I know that it's a vine and that it grows like a weed here in the Pocatello soil.  It's also really hard to kill.  We've tried killing it so it won't pull down the fences around the property.  It keeps coming back (yes we've tried poison).  We had someone at a local greenhouse tell us that it's probably called Virginia Creeper.

Whatever it's called, it gets easily overgrown but creates some beautiful and fiery red and orange leaves when the sunlight starts changing angle.  It's almost worth keeping for those small moments each year. 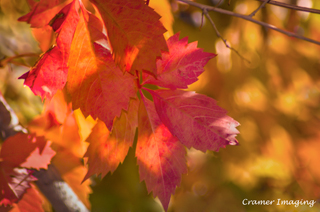