With me, Amber ~ The Self-Appointed Biblio-Kitty

OH MY GOSH! OH MY CAT!  I'm so excited I can barely contain myself... mew'll neffur believe it but I've neffur had a Valentines card, like effur and then today I got five!  Can mew believe it?

I got five cards from mystery admirers, I'm speechless! 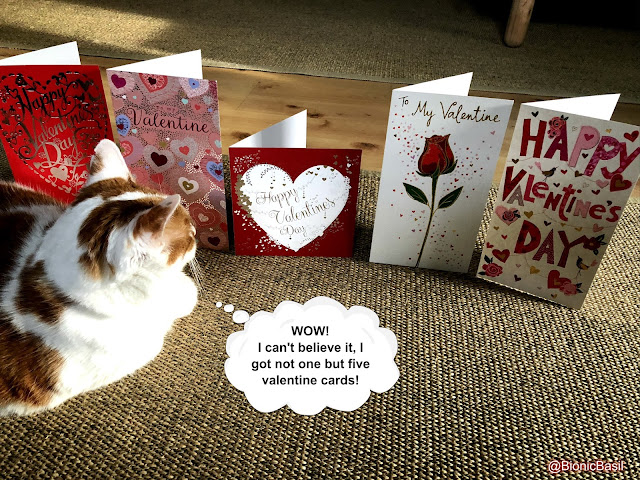 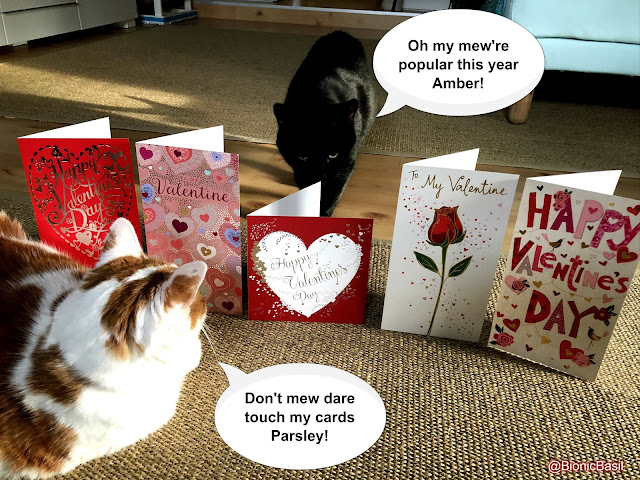 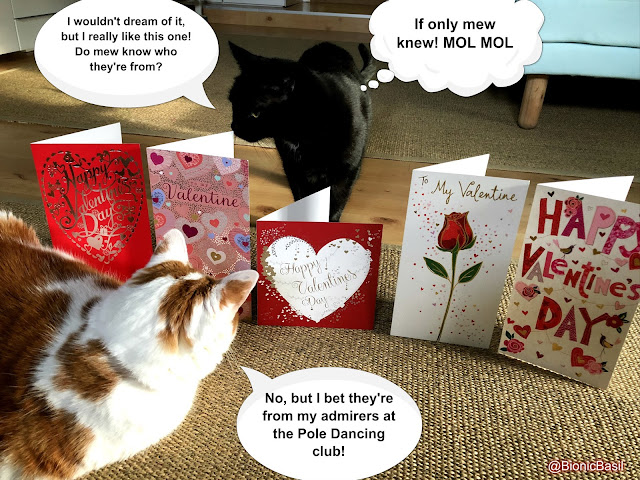 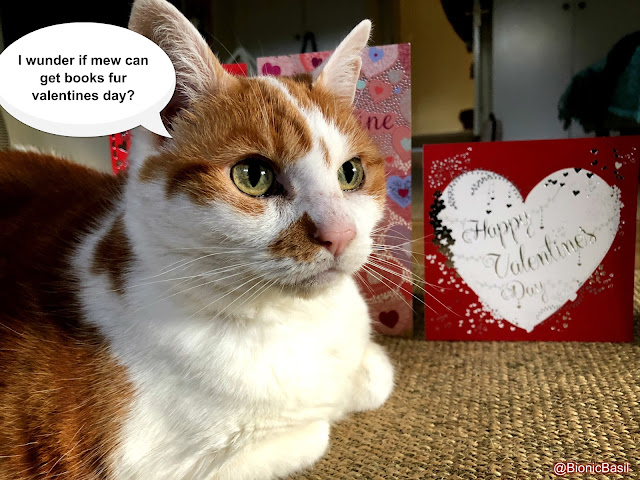 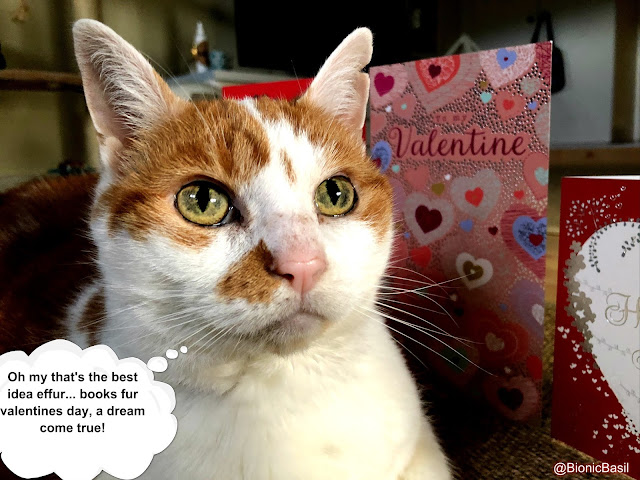 I could dream about that fur hours... Cloud cuckoo here I come!
*    *    *
Meanwhile Parsley and Basil were having a private conversation under the stairs.
"Dude, has she got the cards?" Basil asked in a hushed tone.
"Yes, and she thinks they're from her admirers at the pole dancing club!" Parsley smiled.
"Brilliant dude, and is she happy?" Basil asked.
"Dude, she's on cloud cuckoo and began saying something about getting books instead of cards next year!" Parlsey chuckled.
"That'd be right!" Basil replied grinning. "Let's see if she's this happy when we ambush her with an intervention next week!"

And just to share the love a bit more, here's Smooch and Fudge... 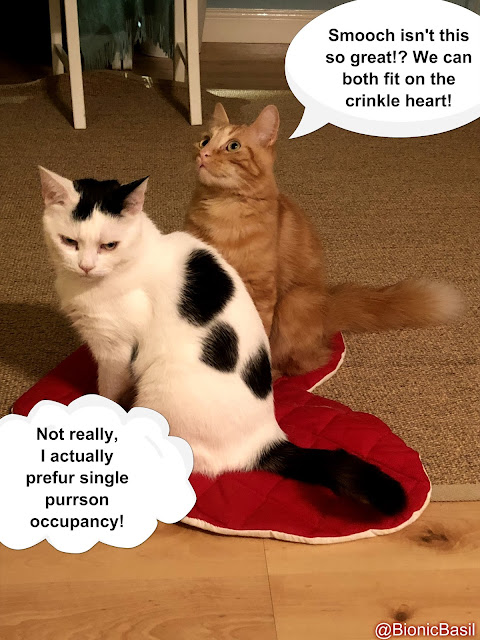 Now I think it's time to share this weeks book.

This week I'm sharing this 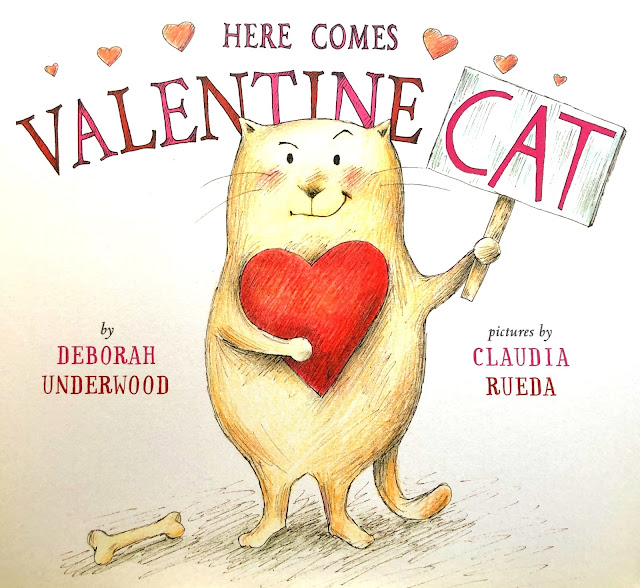 Here's the book blurb:
Cat does NOT like Valentine's Day. It's much too mushy, and no way is he making a valentine for anyone- especially not his new neighbour, Dog.

Dog refuses to respect the fence: he keeps tossing over old bones and a hitting Cat in the head! But just as Cat's about to send Dog an angry "valentine" telling him exactly what he can do with his bones, Dog throws a ball over the fence.

What is Dog playing at? Cat is in for a hilarious - and heartwarming - surprise in this story about being perhaps too quick to judge.
*    *    * 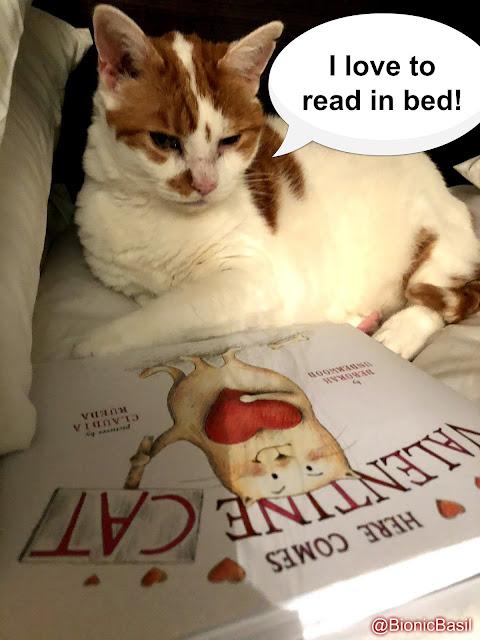 Now I don't think I've reviewed anything fur this age group before, normally as mew know I'm all fur a cozy mystery or two and a gritty thriller, or a bit of sci-fi or even some far out fanasy adventure, but only if its got cats in.  But while I was purrusing Amazon looking fur something to share with mew today, I saw the cover and I was smitten immediately by it.

Even though book this is fur much younger readers, ages 3 -5 to be exact, I thought it was the cutest thing effur!

Now call me an old grump; which until I received all my beautiful valentines cards this morning I was... so I could relate to Cat who's not a fan of the loved up day on February the 14th!

The books starts with the narrator asking Cat if he has any valentines day plans and Cat replies with a picture of heart with a line through it. The 'script' is really sweet with a lovely message and Cat's pictures just bring it all alive.

The illustrations are so cute, in fact effurything about this book is adorably cute, so much so that I'm actually having a complete cuteness meltdown MOL, but seriously if mew have children or grandchildren, nieces, nephews or godchildren this little book is so much fun and really brings a smile.

If that's not wurth getting it fur then I can't think of anything else to say.

Except that, there are other books in series, which no doubt I'll share with mew at some point throughout the year.
*   *   *

I do hope mew enjoy this book if mew decide to give it a try...
...and if mew've read it already, let me know what mew thought.
*    *    *
Sadly it's time fur me to say BFN or bye-fur-now as mew know the drill, so many books, so little time and don't furget that I'll be back next week with another specially paw-picked book just fur mew.
Happy reading or listening
Bestest biblio purrs and kitty kisses
Amber xox

Frasier’s Honey Snow: Does truth hurt…
What do search robots do?
benefits of dark chocolate
What to wear: outfit ideas for Christ…
Online Massage Therapy Courses, are y…