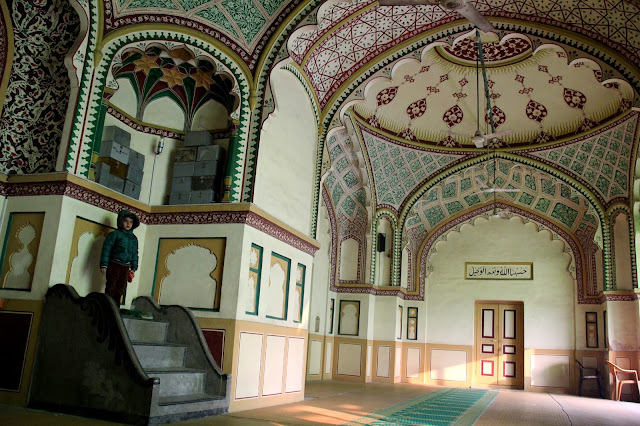 Since Lucknow is the native place of both my folks, they decided to take me on a 'heritage walk' which is like a morning walk where you see things you've never seen before. We began the walk early in the morning from 'Tila Wali Masjid'. 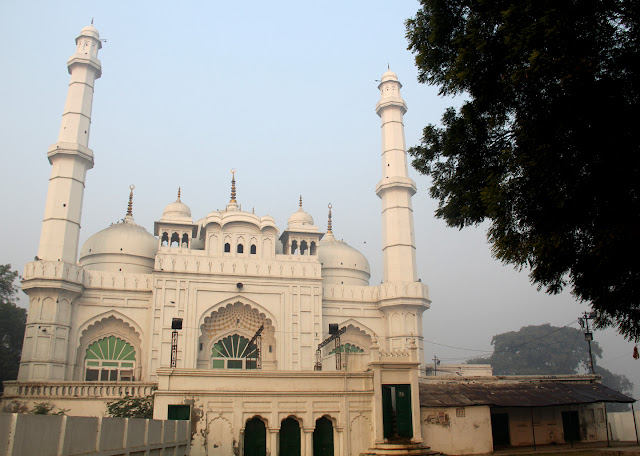 Moma says 'tila' means mound and the mosque was built on a mound more than 350 years ago. 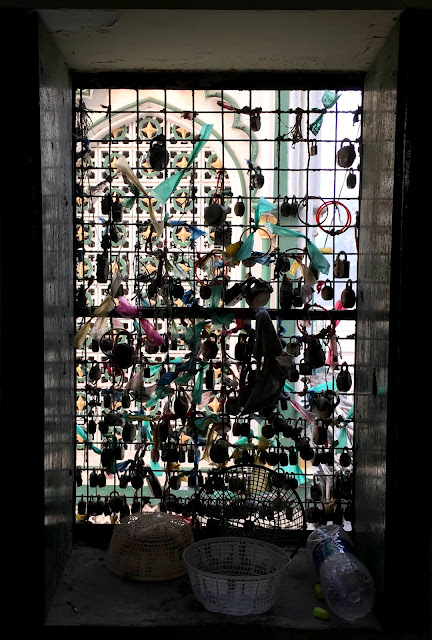 Next to the mosque is a 'dargah' or a holy man's grave where people hang padlocks when they want something. Once their prayer is answered they open the lock 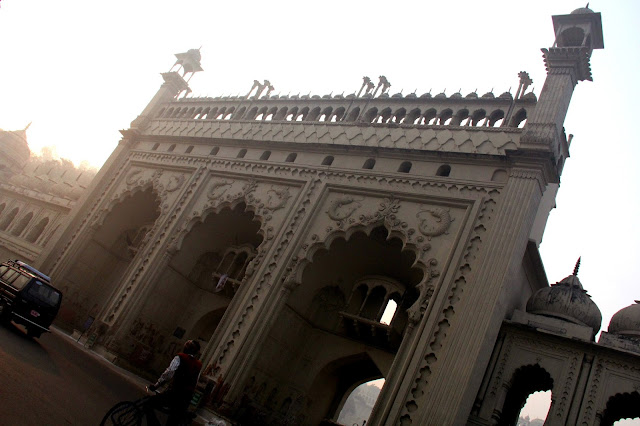 From there we went to 'Bara Imambara' which is a huge and beautiful shrine built in 1784. People come from all over the world to see it. 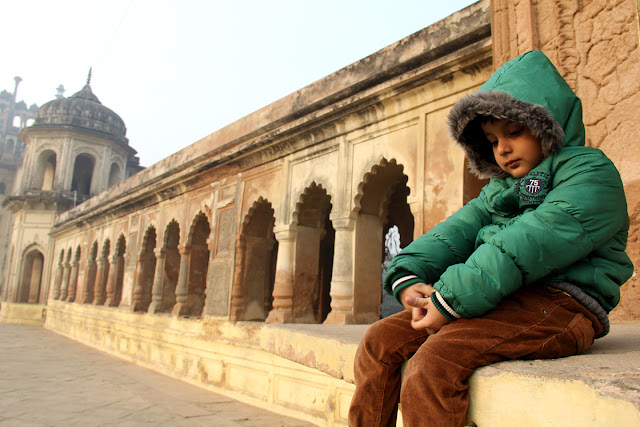 But I got tired and thirsty walking and walking, so Moma sat me down here while DC (Daddy Cool) went to look for some. 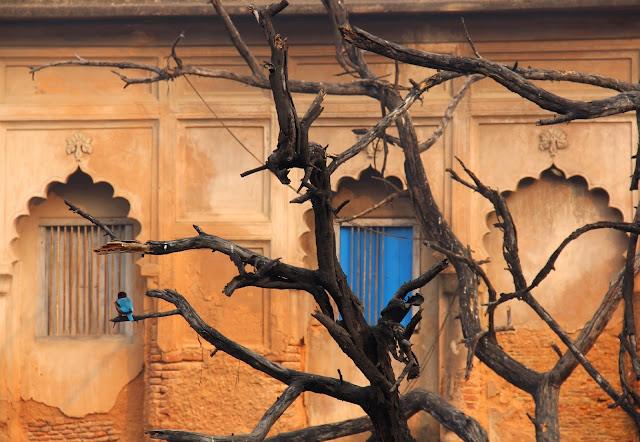 When we were coming out from the other side of Bara Imambara, DC picked me up and showed me a Kingfisher bird that was matching with the blue window behind. 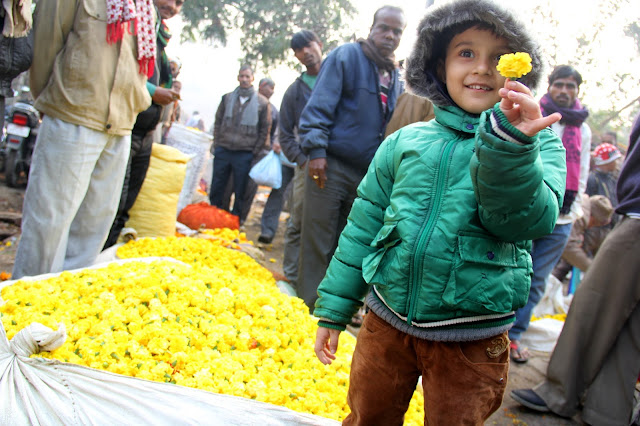 We then walked to a flower market where they were selling flowers by the kilos. I just wanted one and they gave it to me free. 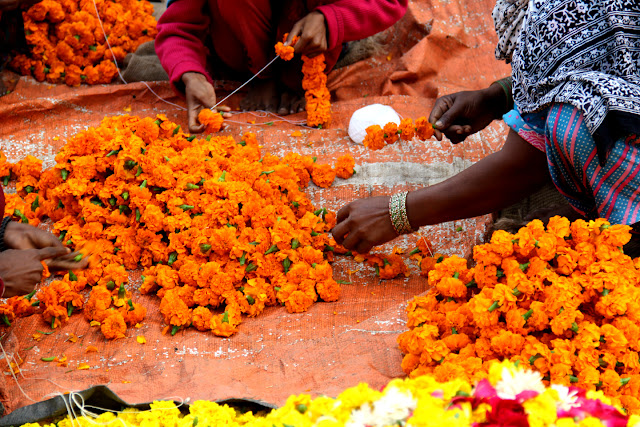 There were also some women making garlands from the flowers for people who didn't want just the flowers. 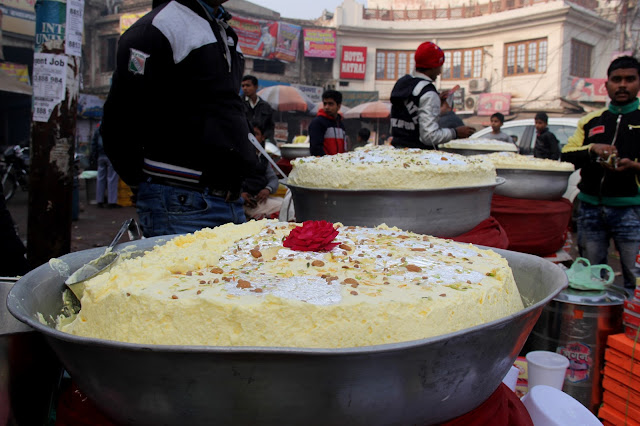 At one place we stopped to eat this thing called 'nimish' which is a yummy sweet dish that tastes like ice-cream with a lot of air in it. With it they give you free silver flaky paper to eat too. 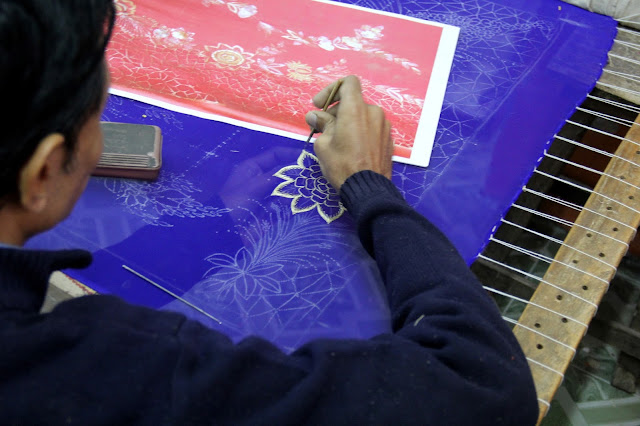 We passed through a very small 'gulley' or lane to see this Uncle making designs with gold and silver thread. It is called 'zardozi' and it's famous everywhere in the world 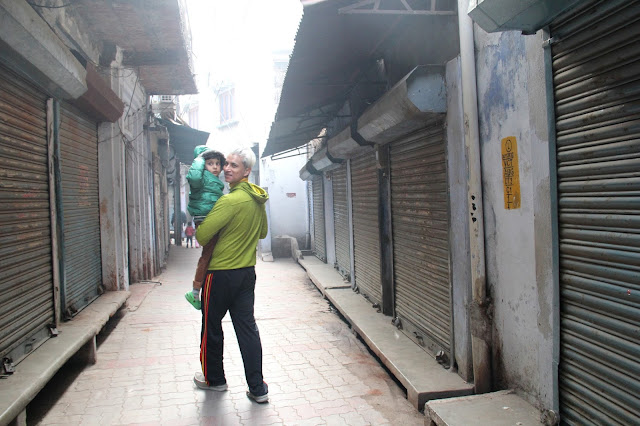 When I got tired walking DC picked me up and told me our next stop would be a 'historic' place. 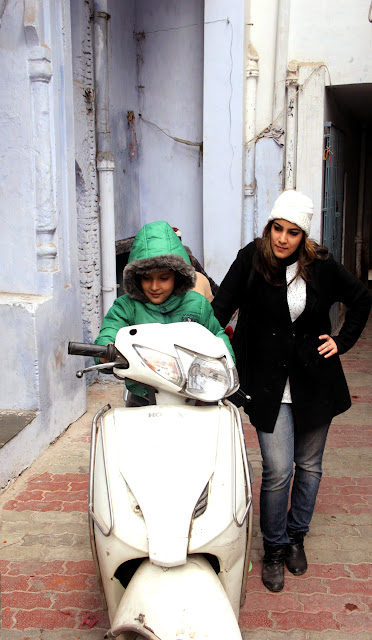 I wanted to ride the scooter in the lanes but Moma said it's not safe. 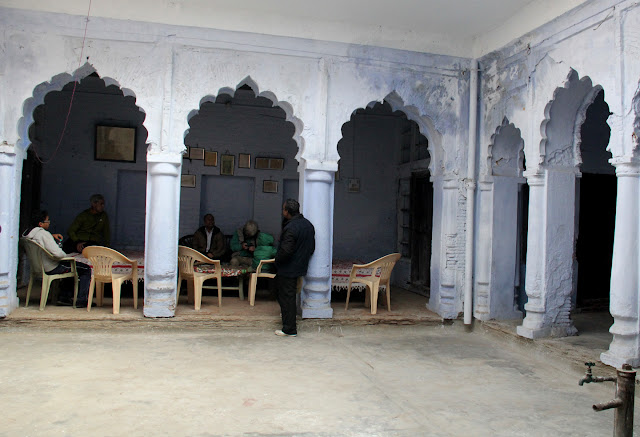 The next stop was 'Firangi Mahal', an ancient house where an uncle met us and told us about the history of his family house. 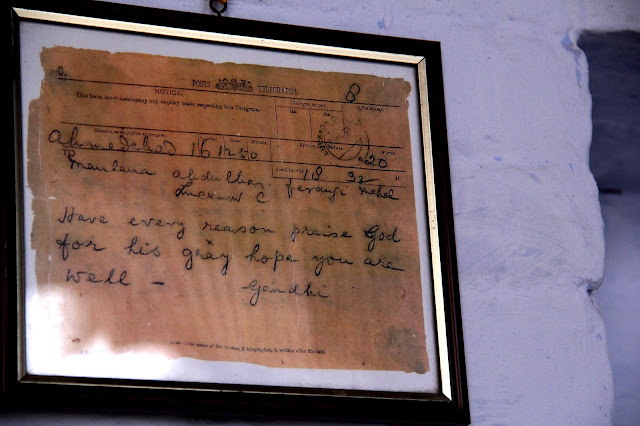 He also showed us a letter Mahatma Gandhi had     written to his ancestor long ago when he came to stay here during the freedom struggle. 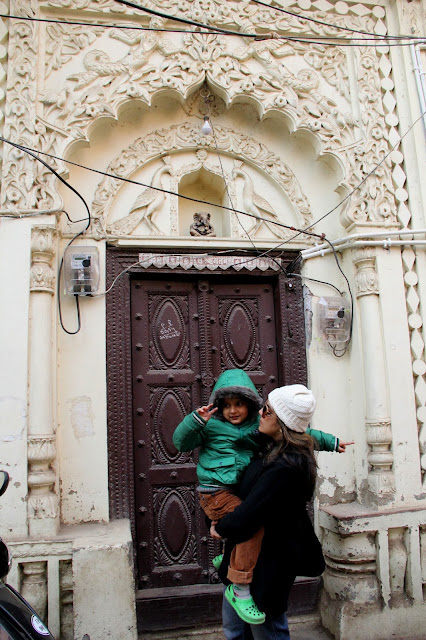 From there we walked past several old houses called 'haveli'. These houses have a lot of carving and designs at the entrance. Moma was really excited to see all the art but my eyes were fixed on the bikes and scooters passing us 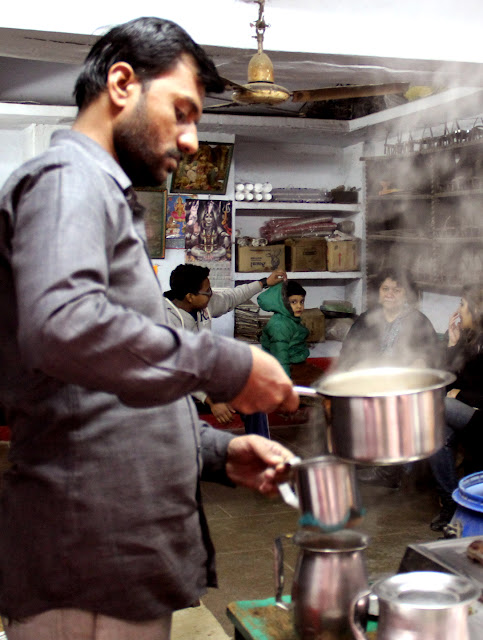 Since the walk was long and it was almost breakfast time we stopped for some chai. I liked watching the uncle pour tea in the glasses from really high above and he never once missed target.

As we walked into the Chowk Bazaar, we stopped over street shops selling the traditional skirts for women called 'gharara' which Moma loves wearing and ancient perfumes made with sandalwood oil called 'ittar' that DC trips over! 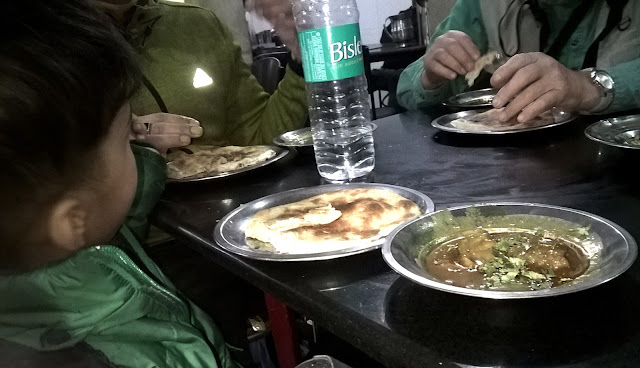 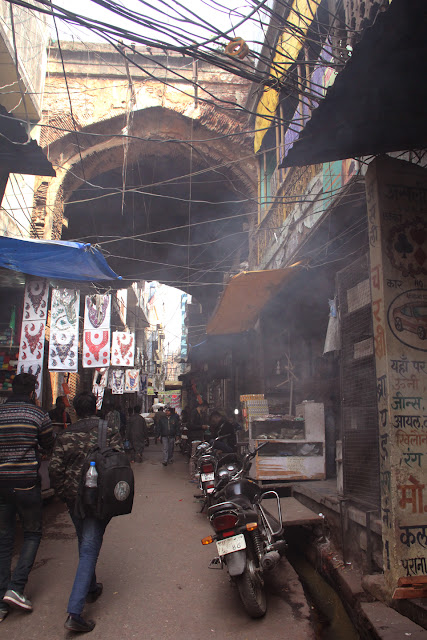 The Heritage Walk ended at this place called Akbari Gate with the arch of this ancient stone structure on top. Moma said it was sad to see this grand gate taken over with mushrooming shops and a web of electrical wires. 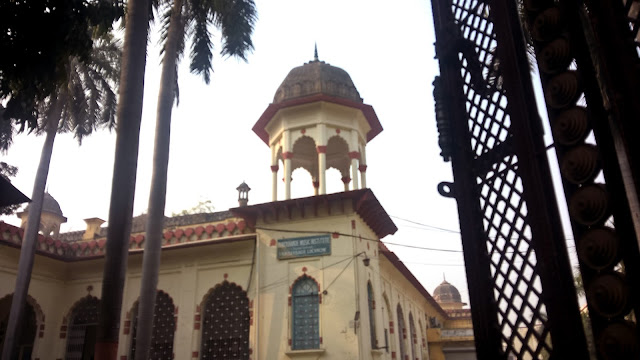 Moma wanted to drive past this famous music school called Bhatkhande because my great grand uncle Talat Mahmood who was a famous singer and one of the most notable alumni there. The school used to be called Marris College of Music when it was built in 1926. 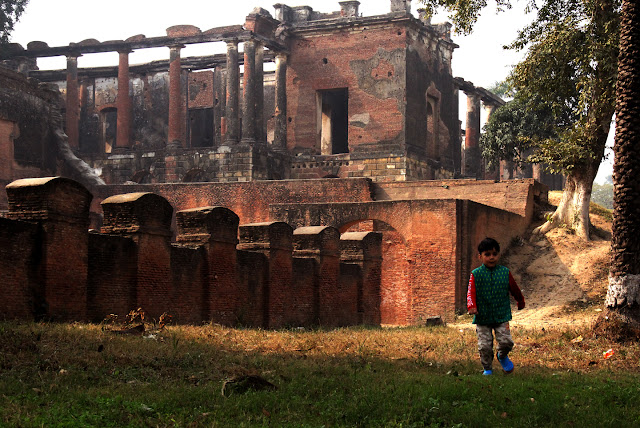 Because we loved the heritage walk so much we decided to go to another historic place called 'Residency' where once long ago a big fight
had taken place. 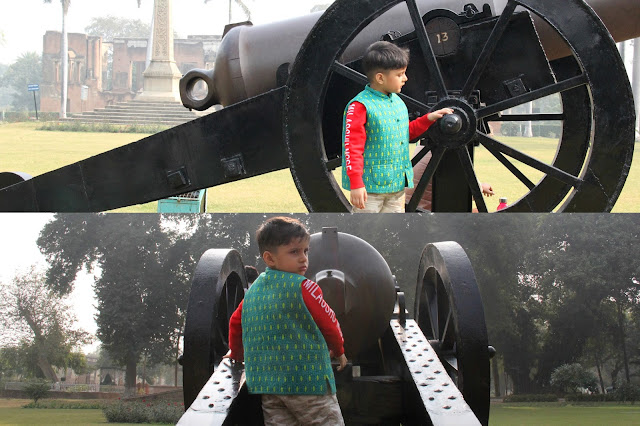 Since I love cars so much I thought this thing was also a car but it had no steering wheel. DC said it was a cannon and it threw big balls of fire at enemy buildings when there's a war. It sounded like a dragon to me!! 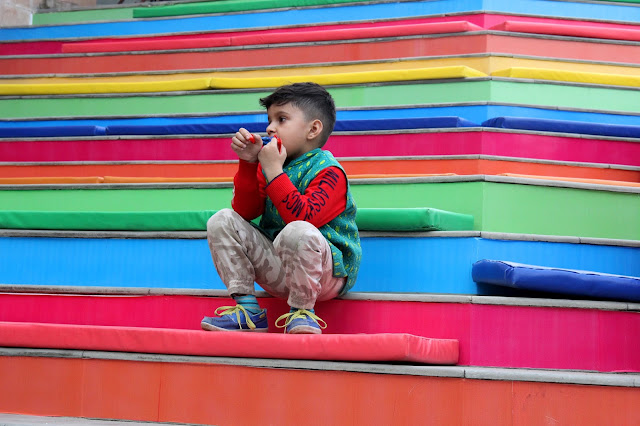 After that we went to a colourful festival of dance, music and theater called Repertwahr. 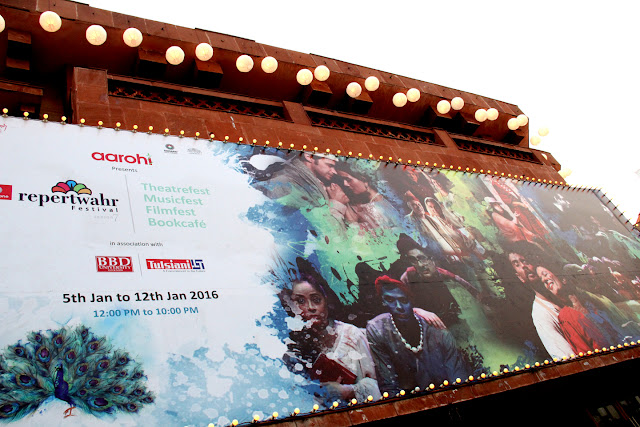 Moma says the Repertwahr festival is an annual feature in Lucknow and adds to the charm of this city. 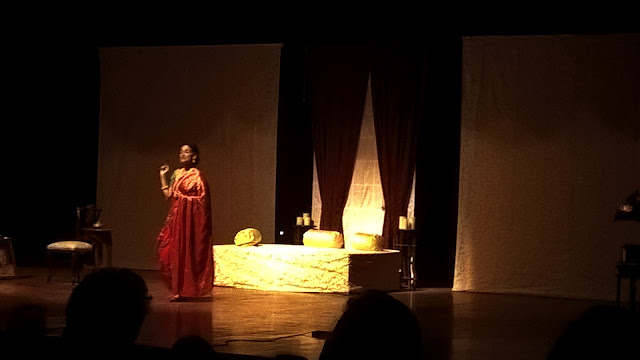 We went to see a play called 'Gauhar' which had a lot of slow songs which I couldn't dance to. I dozed off midway but Moma and DC loved it. They said that the play was inspired by a biography written by their friend and author Vikram Sampath 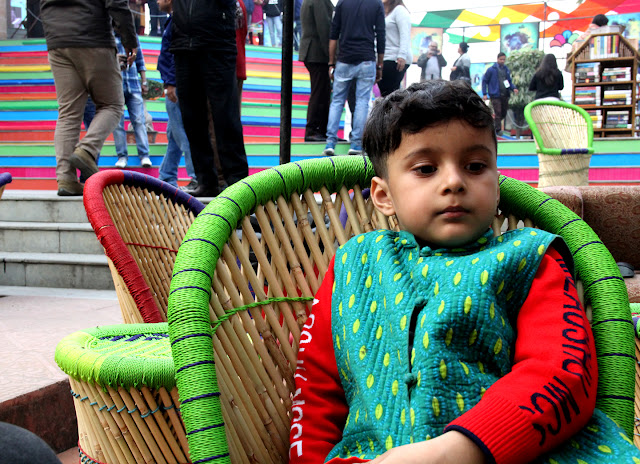 Well, the next time I meet Vikram uncle, I will ask him to add some peppy songs to the play, so that I can at least dance in peace....

It’s Me – Chapter 12
The Trick to Always Looking Sexy for …
Spider-Man: If This Be My Destiny - L…
How to Develop an Educational App?
What it Feels Like to Not Get the Job