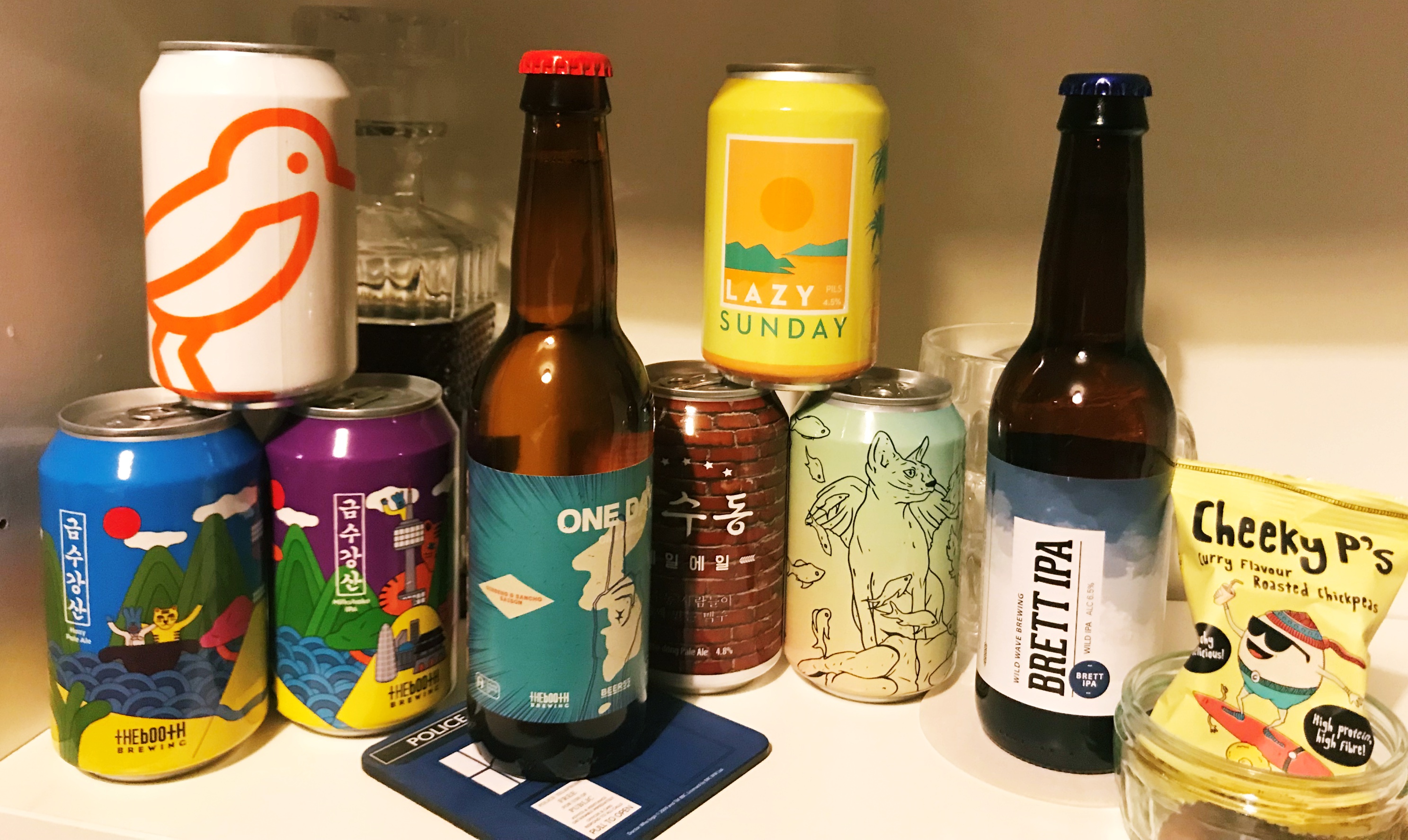 I had a coupon to try a Beer52 crate for free; all we had to pay was the £2.95 delivery charge - for 8 beers, a snack, and a magazine, all delivered to the door, this sounded like an awesome deal. So I went ahead and signed up as a St. Dwynwen's Day present for Anthony.

Marianna was staying at nanny's this weekend, so it seemed like the perfect opportunity to get in some taste testing!

Every month Beer52 showcases beer from around the world; this month it was a selection from breweries in South Korea. We thought it would be fun to compare notes as Anthony's an alcohol connoisseur while I'm, er, not. As you can see from the less than equal division of labour... 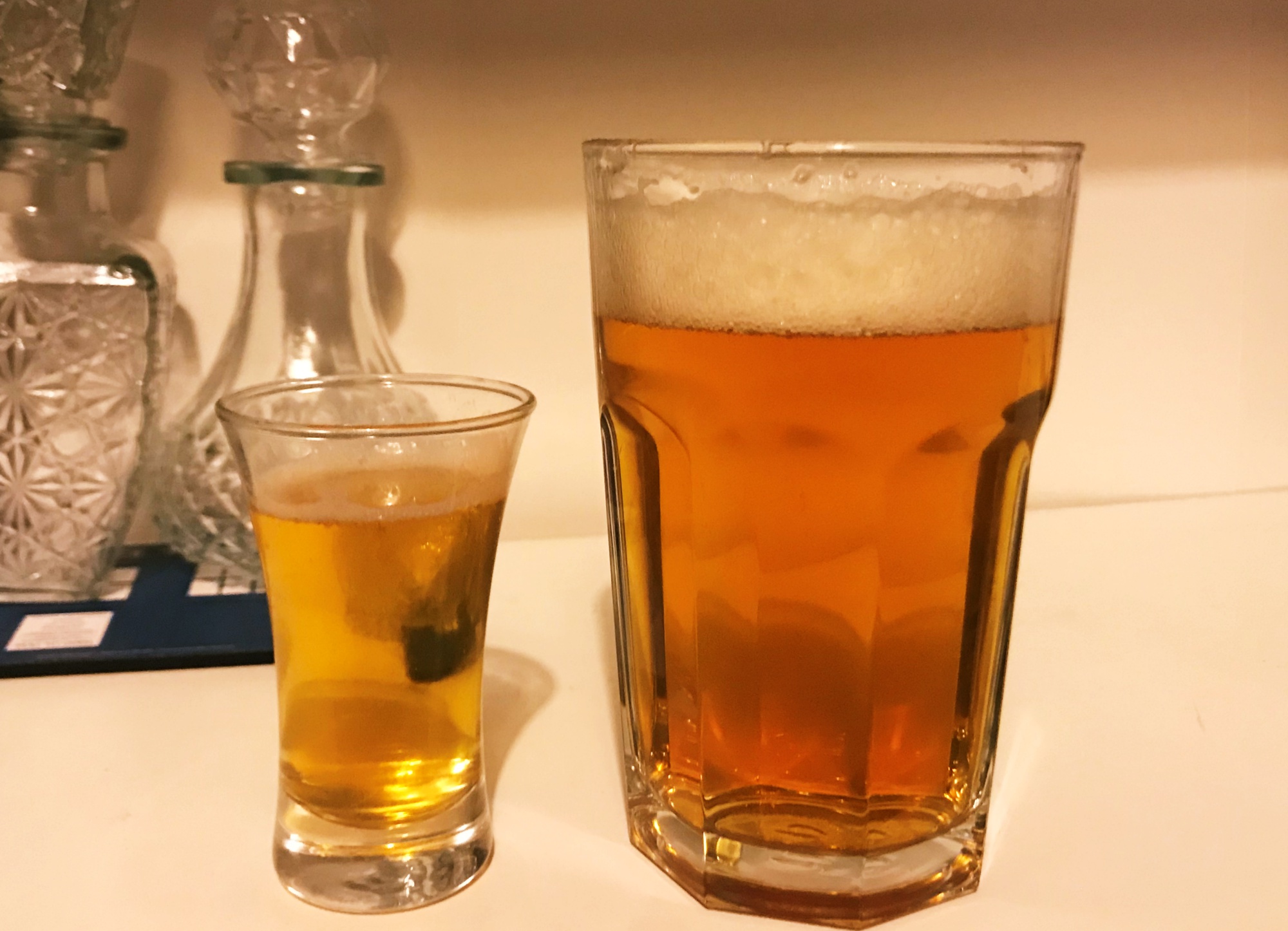 Still, on with the tasting!

A: So Jessica got me some beer, and we decided that the two of us would try it together, here follows the experiences of the day. To set the scene, Marianna is at my parents until the next day, we’ve got an ample supply of snacks and I turn on what’s meant to be a classic rock playlist on spotify, and we dive right in with this offering from The Booth Brewing Company.

It reminds me of my misspent teenage years, that included drinking things like Tesco value scotch (from the bottle) MD (MadDog) 20/20 and coming up with things like a turbo shandy, (lager and a Smirnoff Ice) the turbo spritzer ( wine and a Smirnoff Ice…sensing a pattern) but the worst of all was the Diesel (aka a snakebite and black, but made with beer, not lager), and just the smell of this particular brew took me right back to more than a decade when drinking was about quantity, not quality.

Taste wise however this was a very pleasant and mild little number with a nice fruity and citrus kick at the end, feeling more like a beer flavoured cocktail, than a fruit flavoured beer, unsurprising given its origins to raise money for the LGBTQ+ community in South Korea. It does however possess the weight and heft of a bitter or stout so sits quite heavy in the gut so when combined with its higher alcohol content, it might wind up KOing You after the first round.

J: It smelled like cider and black and made me think of beer gardens in the summer. I didn't like the taste because of the really bitter aftertaste; I gave it to Anthony after drinking less than half. The can design was very cool though! 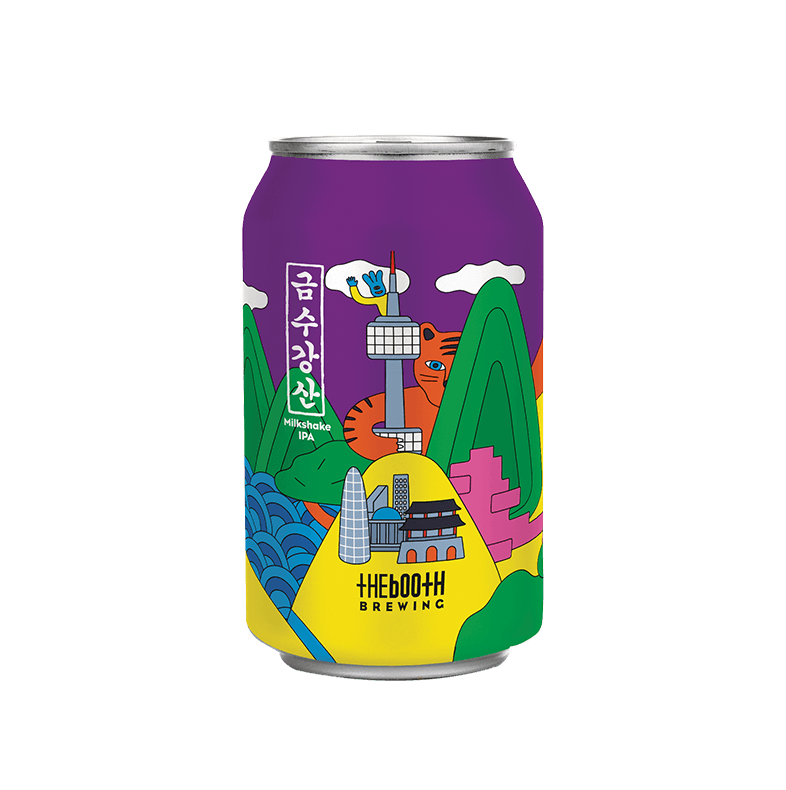 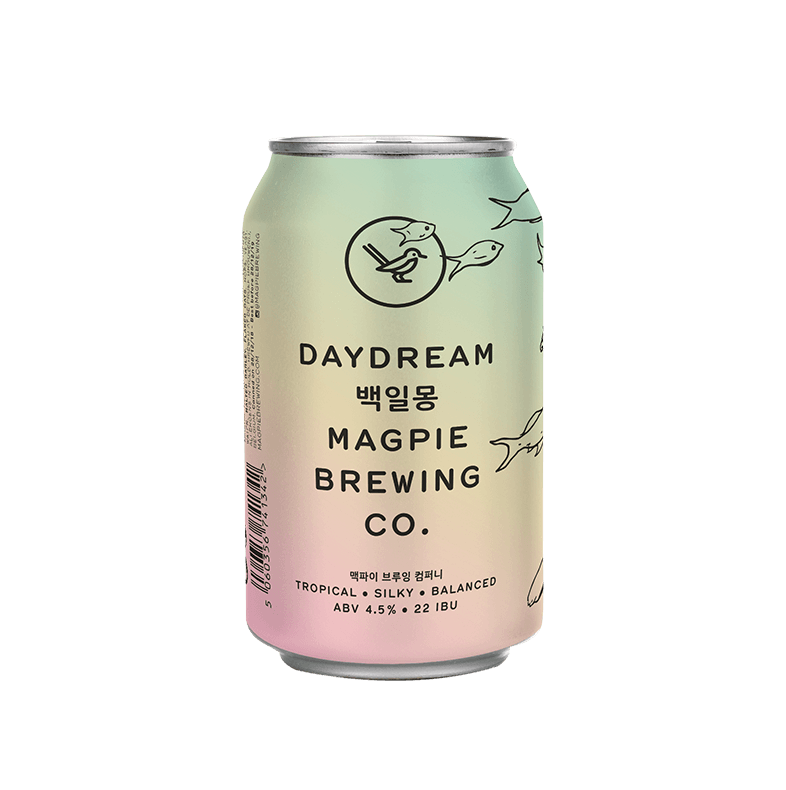 A: A little tangy to begin with, but by the third mouthful its ingratiated itself to your pallet. It’s pretty lightweight, and could almost be confused with a premium lager of the European variety (there are definitely some similarities). the taste lingers around for a while, and is pleasant enough if unremarkable light beer, not all that gassy and not all that heavy, and I think a couple of pints of it could be quite nice with a meal, it certainly pairs well with beef jerky and cheese and onion crisps.

In other news my mood is going a bit, mainly as spotify has informed me that Blink 182, Sum 41, and Wheatus are now considered Dad Rock.

J: Another awesome can design! I liked this one a lot, and it went down especially well with a bag of Cheese and Onion Walkers.

A: Whilst I’m drinking it a day early the Lazy Sunday is an amber coloured pilsner which is more in keeping with the sort of thing that I usually drink. Lightweight, the sort of thing you can (or at least I can) drink from noon until midnight and still retain some semblance of posture, and can pronounce most of your words. It tastes like a lager, its got a head about as good as any you’ll get in Holland and has a crisp taste that both quenches the thirst and spreads peace and tranquillity like a liquid Dali Lama. It seems that the Amazing Brewing Co certainly tries to live up to its name with this batch of Lazy Sunday.

Jessica has resigned herself to her laptop and I’ve resigned myself to the fact that the musical tastes of my youth are now officially classic rock, which is depressing, luckily there’s this magic golden liquid that seems to be helping with that.

(Note: The Seal has been broken)

J: It tasted a bit strong for me. Cool can design though; I'm going to google and see if there are any crafts to use these for. :) 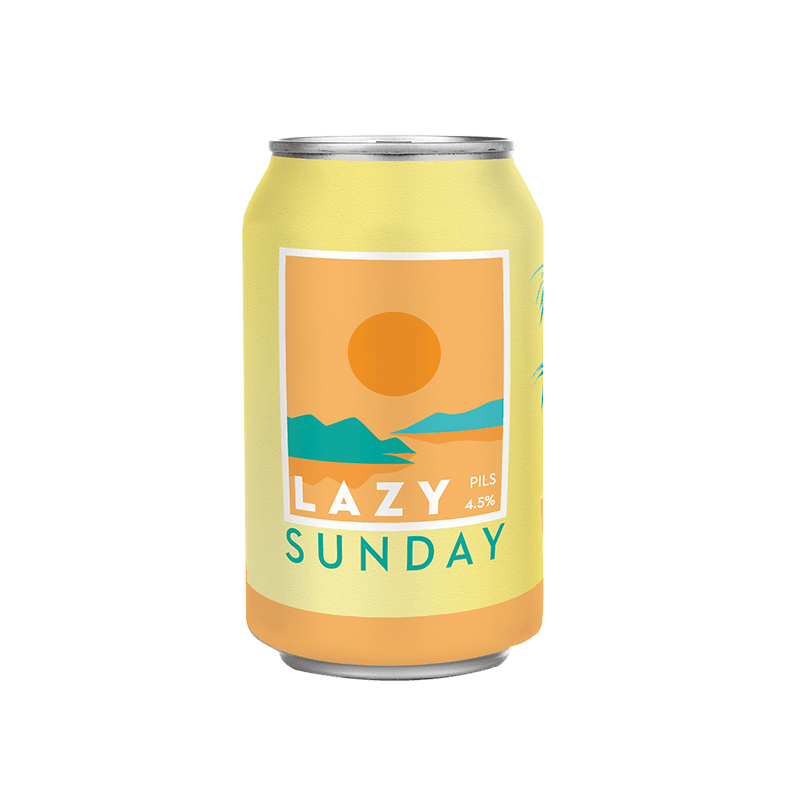 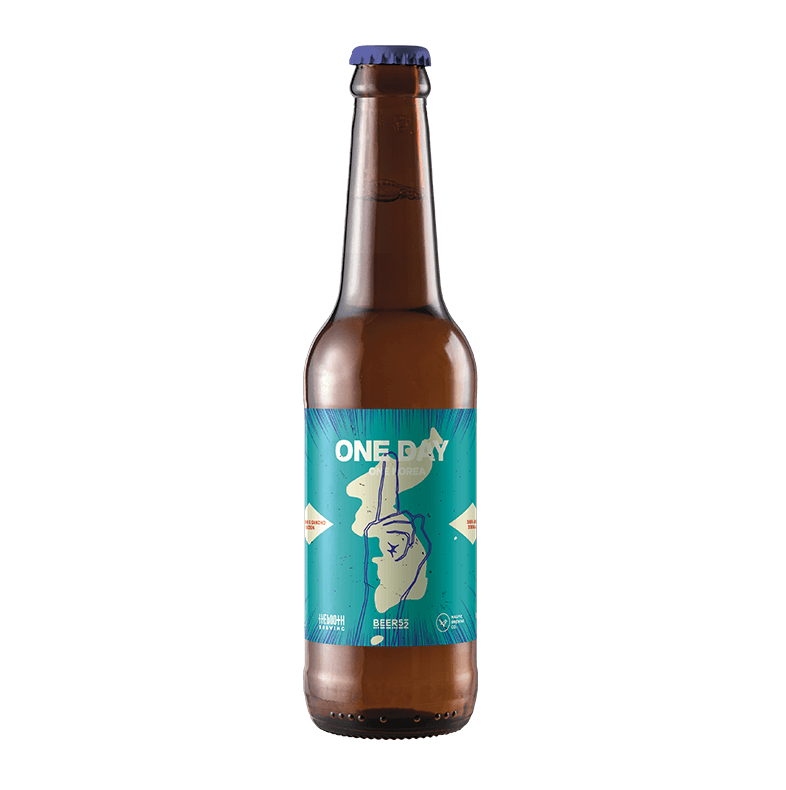 A: I like politics and I like beer, but when the two usually meet, it generally either means a blazing argument in the middle of pub over the rights of free speech, the virtues of brexit or the nocturnal habits of prominent members of the conservative party or means that I’m going to be paying more taxes on my next round. But One Day One Korea is the perfect blend of political statement and passable tipple, taking the brewing traditions of both North and South Korea and infusing the two together. Unfortunately what you get is a rather watery concoction that leaves you crossing your legs and choking on the taste of ginseng, whilst it might be good after a run, as beer goes, this is one best suited for the designated driver.

I have to be honest I’m feeling it a bit at the moment, I’m not sure whose stupid idea it was to do all these beers in one go (probably mine) but doing it on an empty stomach was definitely not a bright idea no matter whose it was in the first instance.

J: My favourite so far. Fruity and mild. I love the whole concept behind the brew too - it was commissioned from various breweries by Beer52 to bring the best flavours of North and South Korea together. The magazine included with the box is great by the way, I'm loving all the trivia. 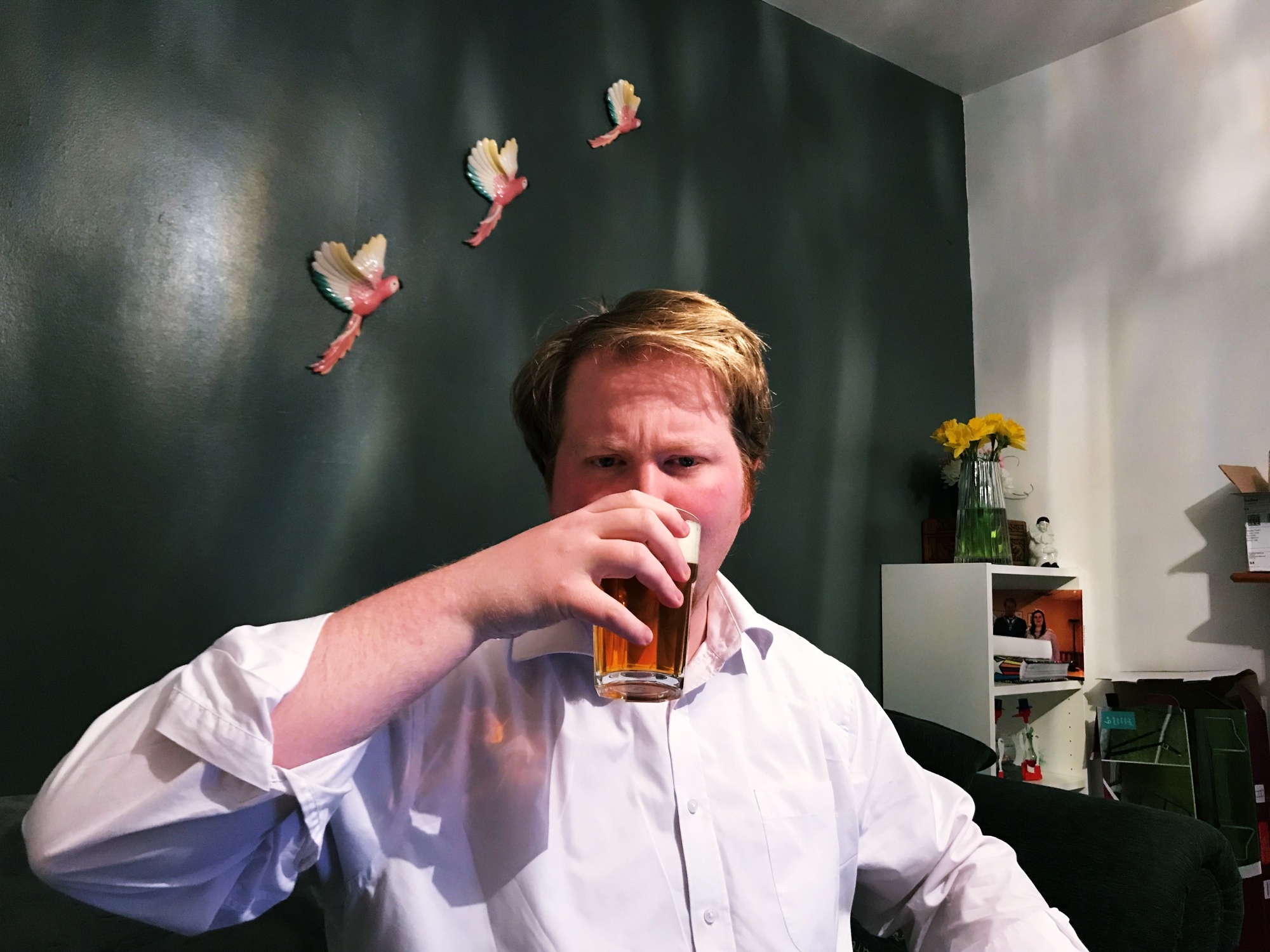 A: From the get go I have to say that this brew had about as much life in it as the subject of recent autopsy, but also came equipped with the strength that would rip your head off at the shoulders if you let it, it was pretty fruity, but I think the drink itself would have been nicer if it had a lower portion of alcohol in the mix.

I need food, and maybe a change of music to actual classic rock

(yet another bathroom visit) 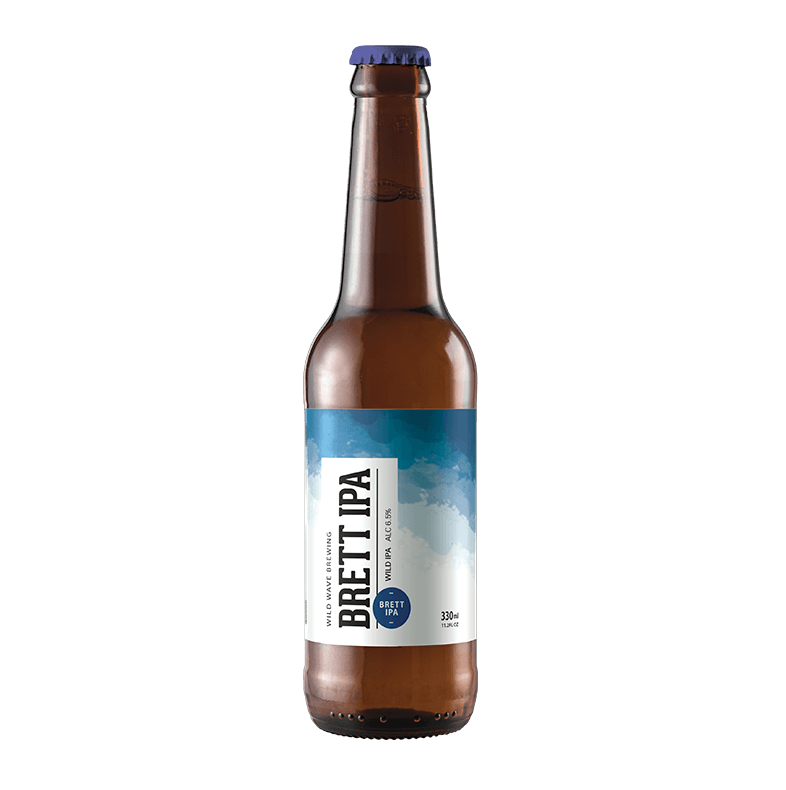 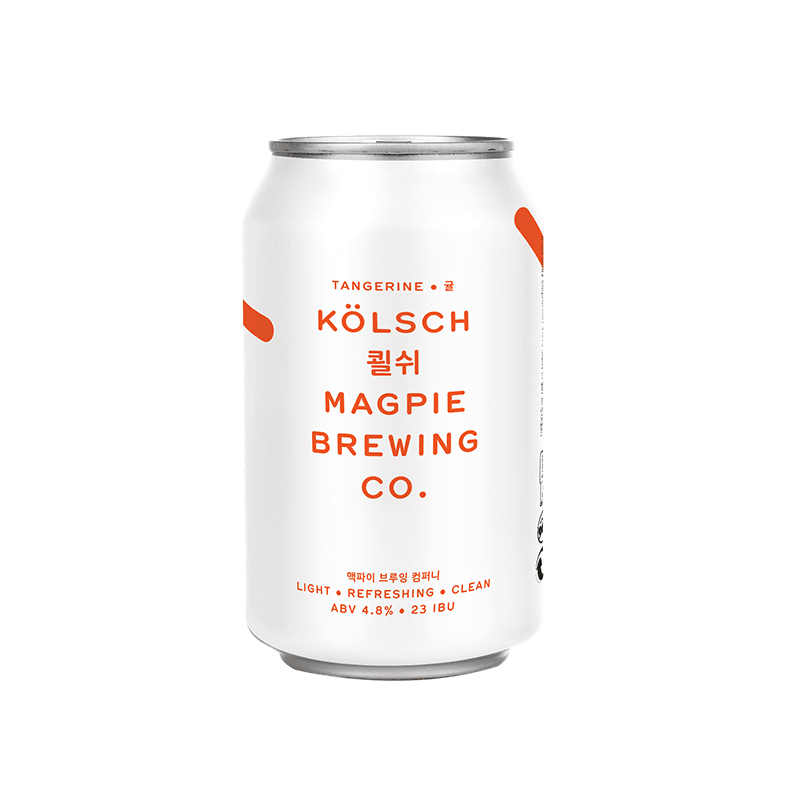 A: You get a lot of head off this one, but it quickly settles down into something drinkable. It's got that smooth IPA taste with a little hoppy finish. I’m not sure how to take drinking a Korean, India Pale Ale brewed in the German manner (other than orally of course) but it seems that the brewing traditions of 3 distant and remote places has been bent together to produce this crisp golden beverage, that goes down quicker than a jesters trousers.

I don’t yet need another pee, but the eye of the tiger has just come on urging me on to try the remaining beers, because I must admit that I was beginning to lag a little by this point, every attempt at conversation I make with Jessica is met with a shhh! I’m not sure if this is because I’m tipsy and spouting crap or because she’s a just a bit boring, either way after a few drinks one of turns into a crushing bore, and I’ve got my suspicions about which one of us it is.

A: It has a really hoppy smell to it that is a little overpowering at first. The fruitiness of the beer is a nice touch, but all you really taste is the fruit and not the bee itself. Its a smooth drink though and not to heavy on the gut, especially after the amount that I’ve already got through. To my mind its more of a quaffing beer than anything else, and not one of the pallet pleasers from this haul, the Amazing Brewing Co has failed to live up to its name with this one.

I’ve finally given in and put on a decent playlist that doesn’t make me feel like something that’s crawled out of a pyramid. Its unusual that my choice of music meets with Jessica’s approval, but there she is singing along to Phil Collins. I must admit that its a surreal experience drinking with my wife without others being present. We both pursue our own social lives and seldom drink around the house, unless we have company, and if we are out together, its usually with other people. (another pee is imminent) 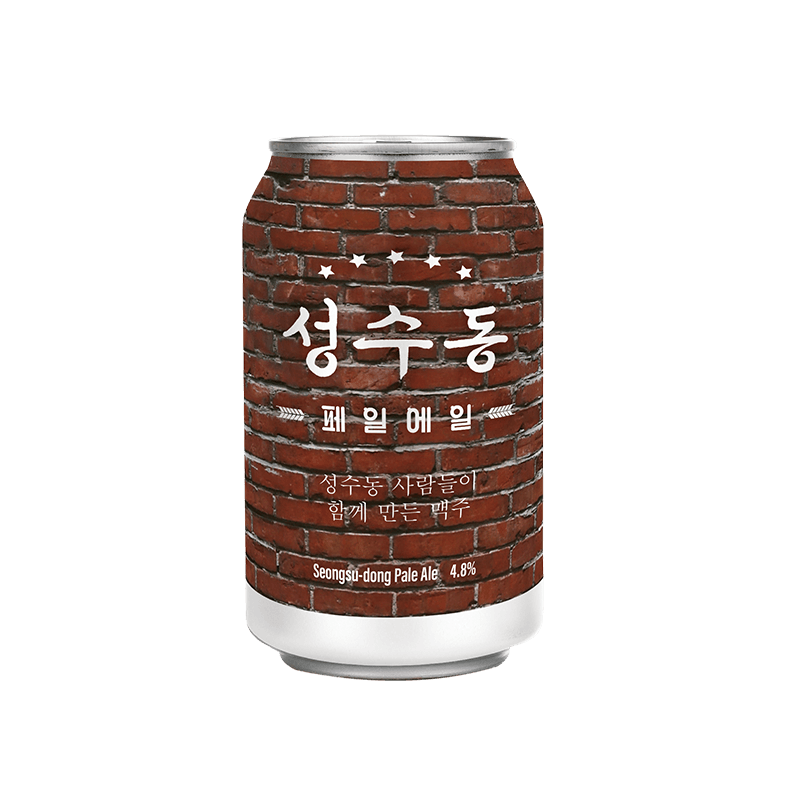 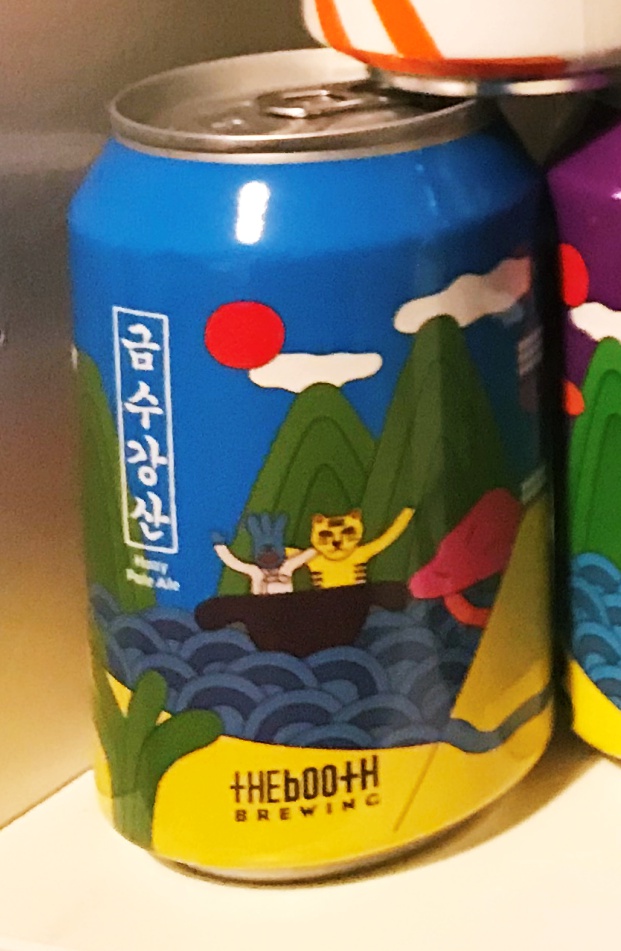 A: Fruity, Hoppy and pretty chewy to be getting on with, as a final offering from the box of beer presented to me by my darling bride, I think this is one of the stronger offerings, courtesy of The Booth brewing company. It sits well, even though its a fairly high alcohol content for a beer, it went down pretty quickly and I was sad to see the back of it.

By this point Jessica has actually sent me out into the pouring rain to get her a pizza but I’ve now returned to find her pretty merry herself listening to the Pina Colada Song, while I’ve all but sobered up entirely, although you’ve guessed it, I need yet another pee.

J: I liked this one a lot. But it wasn't as good as One Day One Korea.


We had great fun with this and I love the idea of testing out a different country's beers each month. You can jiggle your subscription to better fit your tastes, choosing between pale and dark ales for example, and with each box - and review you leave - you earn loyalty points you can redeem for prizes.

Crates are normally £24 + £2.95 postage, but you can give it a go for £14.95 by clicking the pic below. :) (Remember to cancel your subscription after delivery if you don't want to pay full whack!) 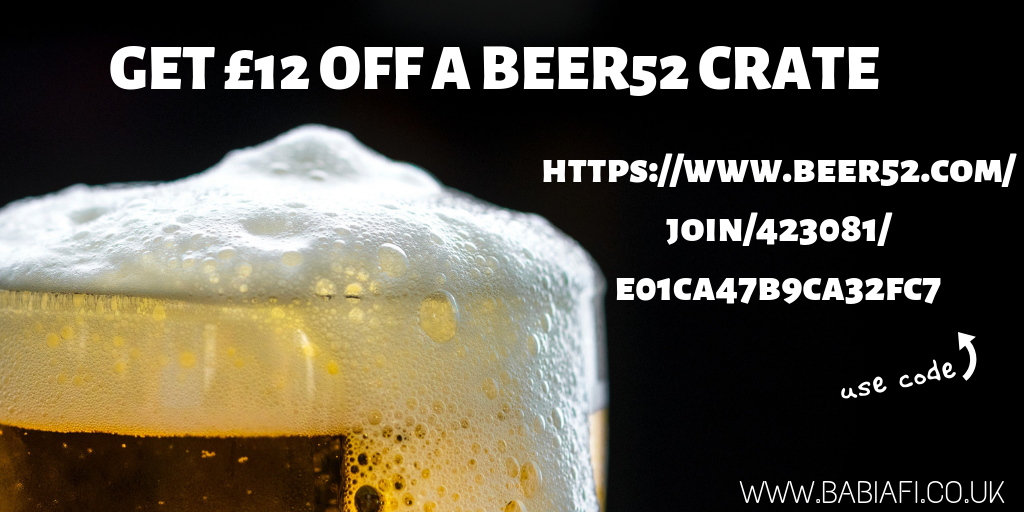 For more of my reviews, click the picture below: 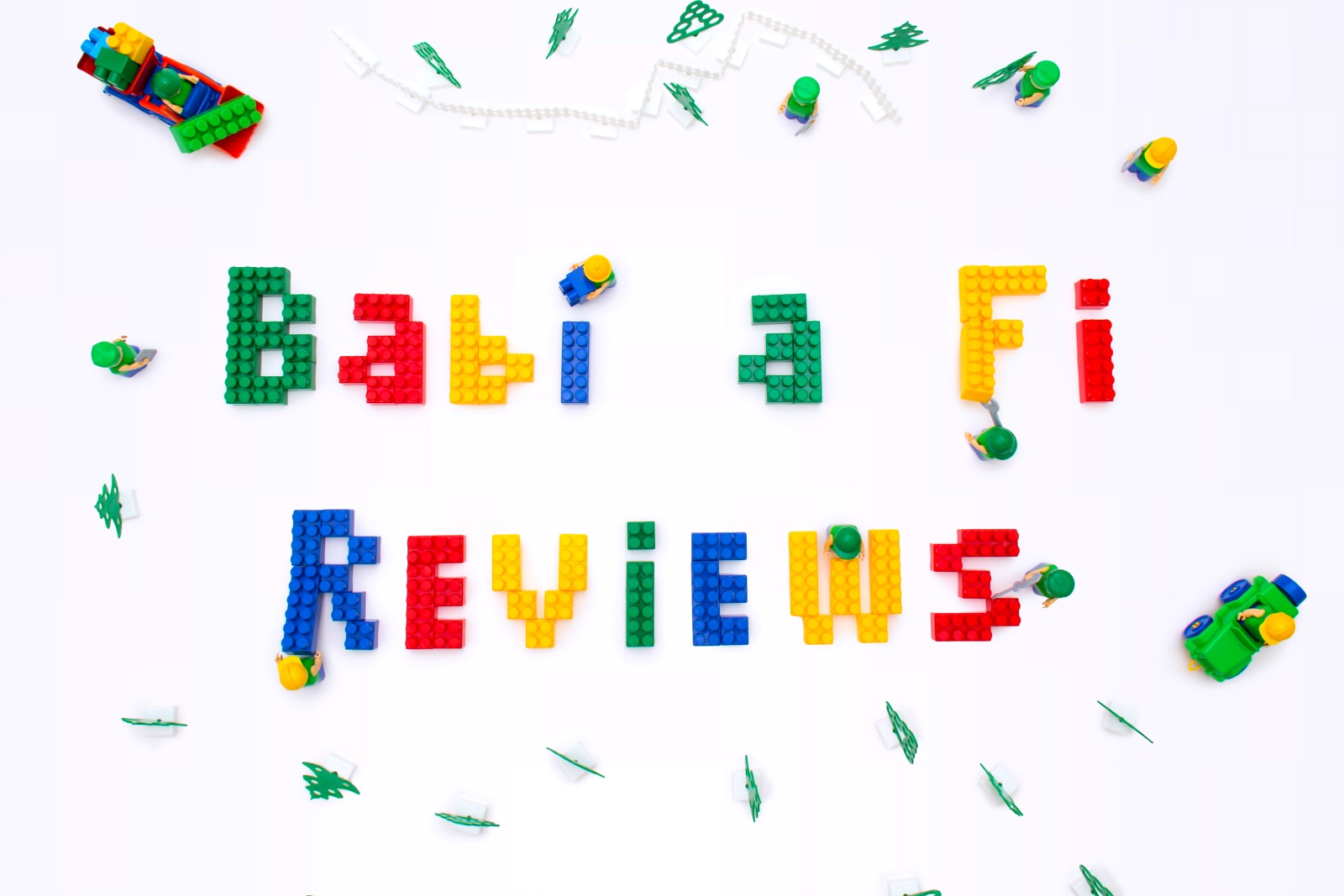