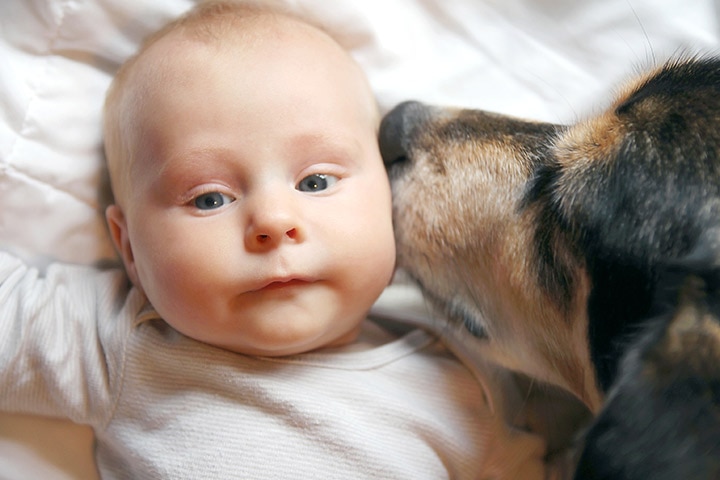 The dog is a man’s best friend!

From being a person who was not very fond of Pets to being compassionate towards animals, I have come a long way to being an animal lover that I am today. The journey has been pretty slow but a memorable one. Initially, I would always maintain a safe distance with them for fear of being bitten or getting scratched. Quite opposite to me are my kids, who simply love pets and I must confess that my love for dogs has grown because of them. To the extent that we now have two pet dogs at home. So, now I am pretty comfortable with them, I pet them and play with them, and the warm look in their eyes touches my heart. After reading this Study, I am more fond of them. Let me tell you more.

The study done at the University of Alberta indicates that having a furry pet can help develop infant’s gut bacteria which helps avoid allergies and prevent obesity in future.

This study was part of a large study, (Canadian Healthy Infant Longitudinal Development Study (CHILD)). The study done on 746 infants whose mothers were expecting between the years 2009-2012. The study was published in the journal Microbiome.

The mothers were asked questions relating to pets: whether they had a pet during the second or third trimester and postpartum. The two groups of Pet Exposure (one’s during pregnancy and the other pre and postnatal) were compared against no pet exposure under different birth conditions.

The study findings indicated infants exposed to furry pets had increased levels of two forms of bacteria, Oscillospira and Ruminococcus. Previous studies showed an association of Oscilospira with a lesser risk of obesity, and Ruminococcus has been linked to reduced allergies risk. The research team found that having pets during pregnancy is associated with a lower risk of strep infection (which causes pneumonia in newborns) during birth.

The impact of pet exposure to infants varied under different birth scenarios. However, the common aspect in all scenarios was that the exposure increased the bacteria two-fold. The presence of bacteria which is negatively associated with allergies and obesity increased.

These associations were independent of maternal asthma/allergy, breastfeeding and other factors at home.

The study observed that when babies are exposed to bacteria and dirt from a pet’s paws or fur, it helps them build immunity early on. This can happen from pet to mother to the growing fetus and also during the newborn’s first three months.

Anita Kozyrskyj a pediatric epidemiologist who is one of the world’s leading researchers on gut microbes said, “This interaction helps to develop the baby’s immune system. The abundance of these bacteria were increased two-fold when there was a pet in the house.”

The researacher suggests that microbes equip the immune system to react to harmful bodies such as pathogenic microbes and not to useful microbes and nutrients. Higher levels of one of the gut microbes is associated with leanness and protection against obesity.

However, the researchers said more research is required to establish the link between changes in gut bacteria in infants with pet exposure and to see the changes in health outcomes in the long run.

Finally, I am glad about having pets and kids under the same roof. I no longer worry about the kids catching any infection from dogs or the fur going into their mouths and such stuff because it’s all helping them build their immunity.

Isn’t it so reassuring to see how nature takes care of the co-existence of pets and humans?

What do you think? Do you have a pet story to share?

The post Why Dogs and Cats Make Babies Healthier appeared first on MomJunction.