Indian literature is thought to be the earliest in the world, having contributed most in terms of classic literature. One of India’s most influential contributions to world literature is the “Panchatantra”, a collection of most creative and imaginative Stories for children. This oldest surviving fables in Sanskrit  from ancient India, is thought to be written by Vishnu Sharma by around 3rd century BC.

The Panchatantra is the best guide to develop moral values in children, as each tale has a lesson at the end. In all Panchatantra stories, plants and animals can speak. This itself will make children use their imagination and see the world in a different way.

King Amarashakti, who used to rule Mahilaropya in southern India, had three sons with much to be desired, as they were not quite bright. The king asked his favorite and brightest scholar in the court, Vishnu Sharma, to educate them. Within first few days of interaction with them, Vishnu Sharma understands the traditional teaching methods is not going to help them as they are way back in absorbing it. And it was then he came up with the Panchatantra as a solution. These stories he made with an intention of teaching them the five tantras or values that empower a human being. The five tantra comprise:

Feature stories about how to win friends.

Feature stories about how one may lose his closest friends.

3.    “Aparïksitakárakam” or “acting without thinking”:

Tells us how actions have consequences, and that we can lose what is important to us, if we act without thinking twice.

Tells us that it is always possible to get out of a difficult situation without losing anything.

This volume of Panchatantra includes stories that feature tactics and rule of war and peace.

As the centuries pass, several stories with similar morals as the Panchatantra are promoted as tales from the Panchatantra, but lacking evidence of the stories being contained in the original version.

Here is the list of stories in the Panchatantra.

Book 4: “Labdhapranásam” or “Loss of gains”

Book 5:“Aparïksitakárakam” or “acting without thinking”:

We at Zenparents have selected 4 stories from each volume for you to read out for your little one during bed time. 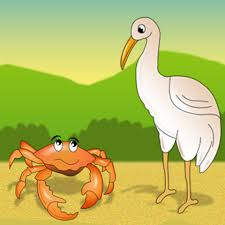 Once upon a time, in a lake in a forest, lived lots of fish and crabs. Among them lived an intelligent crab. One day, an old and wicked crane stopped near the lake. He was hungry, but he was getting old and could not hunt for fish properly. He had an idea. He sat near the lake with a sad look, and when the fish asked him what the matter was, he said that he foresaw the lake dying out and killing the fish. The panicked fish begged the crane for help and the crane agreed to carry the fish in his mouth to another lake. Like that, he ate a lot of fish in the lake. Then, he became tired of eating fish and decided to eat a crab. He chose the intelligent crab, who agreed. The crane carried the crab to the place where the crane ate the fish and confessed to the crab. He was sure that the crab would not escape. But the crab was clever. He had been suspicious when he saw the skeletons and had thought of a plan. He lunged at the crane and used his claws to strangle him to death.

Moral: Even in the most dangerous situations, you can always rely on your intelligence and cleverness to save you.

This post first appeared on Zenparent, please read the originial post: here
People also like
The BEST Harry Potter Pumpkin Juice Recipe
10 of the UK’s best beach cafes and bars
Why Furries Make Excellent Hackers
How to Create a More Compelling Job Posting
Smart Tips on How to Get More Likes on Your Instagram Posts
Camper Food & Stories
7 Indian App Alternatives to Popular Foreign Ones
51 Best Start-up Ideas to Try
“The Friend Who May Not Seem a Friend”: The Cat and the Fire, Part 1 of 3
10 good news stories for UK travel and tourism in 2021