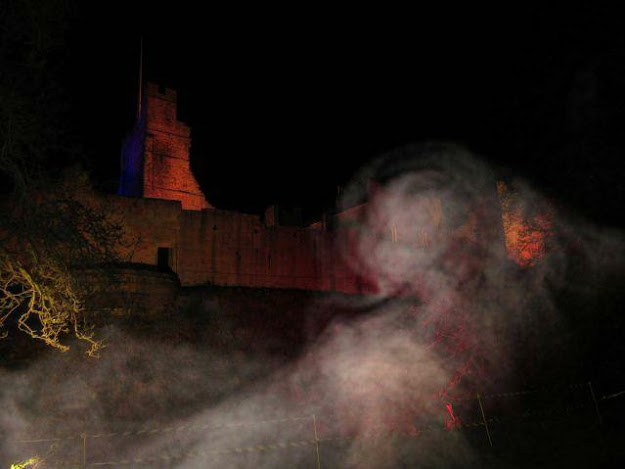 A photograph taken at the Castle, shows what some say is the ghostly apparition of a young girl.

On Friday, November 18, Prudhoe resident, 9David Wilkins took his camera along to get some snaps of the castle lit up at night.

He took a number of shots but it wasn’t until he got home that he noticed that he had immortalised more than he realised.

Photographs taken before and after show nothing more than the illuminated landmark. But one shows a wispy white apparition, that appears to take the shape of a girl turning to face the camera.

David’s wife Brenda said: “We’ve lived in Prudhoe all our lives but David had never been inside the castle grounds.

“So he went along to Children in Need night and got quite a few pictures.

“He found the image when he got home. It was taken within seconds of the other photographs.

“I had goosebumps the moment he mentioned it and as soon as I saw the picture I saw the little girl.”

Brenda’s mother, who passed away last year, used to say that she could see a little girl sitting by her.

Curious to know if there was a connection, Brenda showed the image to psychic medium Maureen Wallwork at Prudhoe’s Aged People’s Treat on Thursday, December 8.

Maureen, from Washington, has helped out at the treat for the past seven years.

She said: “The first reaction I had to the picture was that it’s definitely a picture of a little girl. I would say that she belongs to Prudhoe Castle.

“I think it is a benevolent message, to let Brenda know that everything is fine because she has been going through a difficult time.”

Hired an Autosleeper Duetto
Things to do in Marmaris
Amazon Prime: Amazon Prime Membership…
Portuguese Arraiolos Rugs
Anthony’s is as Italian as They Come