BANGARH - A DESERTED TOWN IN RAJASTHAN

Tags: bangarh princess
November 30th 2015
View original
Bangarh is a town in between Jaipur and Alwar district of Rajasthan. The fort of Bangarh was mysteriously abandoned hundred years ago. According to the historians , The town was constructed by Mado Singh, the brother of Man Singh in 1631.

In those days almost 12000 dwellings were found during the rule of Mado Singh. However, Now its fame ruined due to an unexpected incident occurred there.

THE BELIEF:--
It was believed that the town was cursed by an evil magician  and the other day all the people in the town vanished.
Nobody dares to go there after sunset. The people who went there after sunset never came out and not even a single detail was found about them.It was once a beautiful kingdom but lost its beauty and remained as the shadow. Archaeological Survey of India warned people not to enter the area after sunset. The area is strictly prohibited after 6 pm. You can see the signboard of ASI which was kept 1km away from the fort. It states that the Bangarh area was deserted overnight.

The following points are mentioned in the signboard:-
1) It is prohibited to enter Bangarh fort before sunrise and after sunset.
2) Strict action is taken if shepherds and wood cutters enter the area.
3) The trees found in Bangarh area belong to ASI. No harm must be done to the trees.

THE LEGEND:-
There lived a person named Singhia(who practices dark arts), fell in love with Ratnawati, the Princess of Bangarh. She was so beautiful that she didnot get any person to marry her who can equal her in her beauty. One day the guards of princess went for buying some perfumes for the princess. Singhia want to use his blackmagic power so that he princess would fall for him. So he has spelled a potion on oil. Somehow, the guards reported the incident to the princess. She dont want to take a risk and so throwed away the perfume on the rock. The rock rolled over and crushed Singhia to death. While dying he placed a curse on Bangarh Kingdom that whoever lived in it would die and their souls are trapped forever. About a year later,
a battle occurred between Bangarh and Ajabgarh which killed all the people of Bangarh including princess Ratnawathi trapping their souls in the Bangarh town. 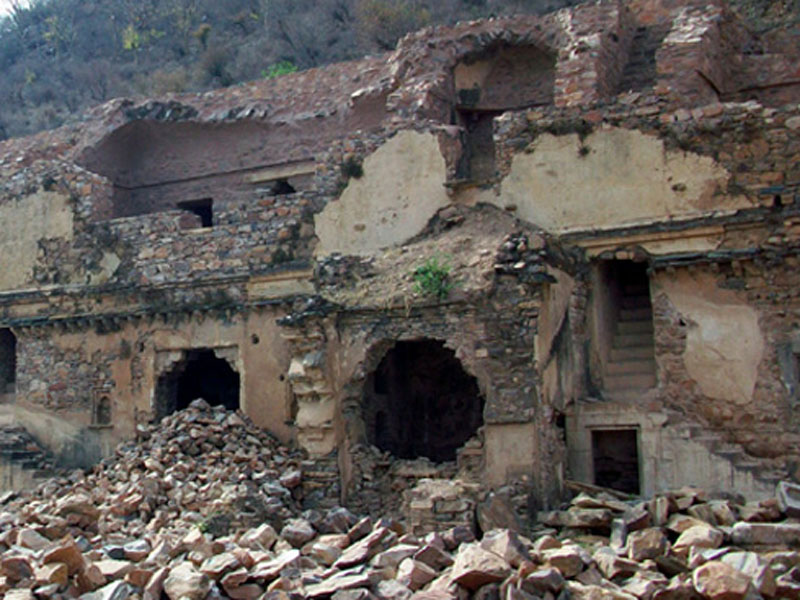 The Archaeological Survey of India (ASI), the official government body responsible for maintenance of ancient monuments and ruins throughout the country officially recognizes the Bhangarh Fortress as a historic haunted location by ghosts and spirits. Because of this, there are no accommodations for overnight stays within its borders, and definitely within the ruins. They, the Office of ASI, even went so far as to stipulate that if any hotels were built, it had to be at a safe distance from the fortress.

Local people says that they hear strange noises at night and they hear music and sounds coming from the place.

BANGARH - A DESERTED TOWN IN RAJASTHAN