Hello, October!  It's ALWAYS Spooky Season here at Theresa's Haunted History of the Tri-State, but things tend to ramp up a bit in the days leading to Halloween.  Once again, I'll be attempting the Ultimate Blog Challenge---31 straight days of NEW Paranormal content here on the blog.  I'll also be posting plenty of spooky Halloween-related content on Theresa's Haunted History's Facebook page, Twitter, and Instagram.  I've got some great new haunted locations throughout West Virginia to discuss, some personal experiences to share, and a whole array of other fun, spooky information that I hope you'll enjoy.  So let's kick off the beginning of the month with a little secret I've been keeping...

Why Lawyers Use Legal Pads?
It’s Me – Chapter 12
Top 10 Sites to watch Telugu Movies O…
How to Get a Girl to Have Sex With Yo…
5 Simple Ways to Spy on Android Phone

Back in August, I discovered Spectral Research and Investigation, a new group based out of Huntington that was just forming. I expressed an interest and was accepted as a member!  We're still in the early, early planning stages, mostly trying to recruit a solid base of like-minded members, but we have a couple of plans for upcoming investigations, which I will certainly share with you as soon as I can.  One thing we have done so far is conduct a sort of meet and greet training investigation at one of my favorite spooky locations:  The TNT Area outside of Point Pleasant, West Virginia!

Currently part of the McClintic Wildlife Area, the former West Virginia Ordnance Works (commonly referred to as the TNT Area) was established at the onset of World War 2 to manufacture and store explosive material for the war effort.  It operated from 1942 until 1945, leaving behind a maze of concrete Igloos, or bunkers, in which the TNT was not only stored, but camouflaged from planes flying overhead. These igloos are pretty much the only structures still standing in the TNT Area.

In the paranormal community, the TNT Area is best known for being the location where Mothman was first spotted in Point Pleasant, on November 15, 1966. Although the North Power Plant, where Mothman was seen, has been torn down, the area is still a mecca for cryptozoology enthusiasts and curiosity seekers. Hiking out to the igloos, many of which are left open for public exploration, is a rite of passage and is actually a really cool experience. Long-time readers of Theresa's Haunted History will know that I've been out to the igloos NUMEROUS times, but I've never really investigated the area in any official capacity until SRI's training investigation this September.

Despite its ties to the unknown, the TNT area doesn't really have a strong association with ghosts---my preferred topic of study.  However, that's not to say that the area doesn't host paranormal activity.  I've heard the odd story here and there, including one about the shooting range being haunted by the ghost of a man who was murdered and left out there.  I've also had my own spooky experience years ago when I thought I was assisted across a barrier by a helpful young man in a white t-shirt...a man who absolutely wasn't there.  (You can read that story here: CREEPY EXPERIENCE AT THE TNT AREA) And, if you want to take a cue from the movie Poltergeist, there actually were quite a few small, family cemeteries located throughout the area which were 'moved' to accommodate construction of the WV Ordnance Works in 1942. As many of the burials were unmarked, many of the bodies were left behind... (TNT Area Graves)

Anyway,  due to scheduling conflicts, the training investigation and meet and greet turned out to only be me and Brian, SRI's founder.  We made the most of the experience, though, and explored quite a few of the open igloos, some of which even I had never been inside. We also got to experiment with some of our equipment and talk about the philosophy of SRI, which will be a scientific-based investigation and research group with the goal of helping those who feel they are experiencing paranormal activity.

Now, normally I wouldn't suggest the TNT Area as being an ideal location for a really serious investigation.  As stated, there aren't a whole lot of claims of paranormal activity being reported.  More importantly, however, is that this is an outdoor location in a very uncontrolled setting.  Years ago, I posted a blog titled Outdoor Investigations in which I outlined some of the unique challenges that outdoor locations present.  It's a little outdated, but things such as weather, intrusion by other people, animal noises, light reflections, etc. are still very, very relevant, especially in a place like the TNT Area. We could hear the hum of insects, the croaking of frogs from the nearby pond, and lots and lots of barking and howling from hunting dogs being ran nearby.

The TNT Area has another interesting challenge...the acoustics inside the igloos are WEIRD. If you've ever been inside one, you'll notice the strange echo.  Depending on your location within the igloo, it can sound like a voice is coming from any direction at different times.  At one point, I could see Brian directly in front of me, talking, but it sounded as if he were right behind me instead.  It can be a little unnerving, and can make reviewing audio a bit harrowing.

For those reasons, I wouldn't claim that anything that happened that night or any potential 'evidence' was proof of paranormal activity...but I gotta say:  stuff DID happen that we couldn't explain. 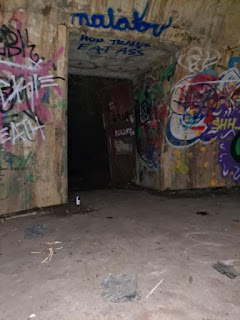 Activity seemed to begin right before dusk. I was by myself at the opening of one of the igloos trying to figure out some settings on my new phone, which I was using as my camera for the evening.  I was right by the door, fiddling with my phone, when I saw what looked like a slithery shadow crawl towards me and disappear as it was about to pass by my feet.  We decided to check out this particular bunker more closely, and set up some equipment.  Unfortunately, our equipment failed to pick anything up (unless you count my laser grid pen that died after about 30 seconds of putting fresh batteries in).  However, we had some personal experiences in TWO separate igloos.

In one igloo, we both noticed some strange shadowy movement, as if something extremely large and extremely dark was trying to make its way into the bunker from the outside. Something kept blocking out the ambient light coming in from the doorway and moving along the wall to our right.  Another spooky thing that occurred was that we heard what sounded like a breathy, female disembodied voice at the same time.  The voice seemed to overlap Brian's voice as he said something, and seemed to be coming from right beside him. We had some other minor experiences, such as drops in barometric pressure, feelings of not being alone, and what sounded like a piece of glass or metal falling near me. Activity seemed to go away as quickly as it would start up, almost as if something was toying with us.

At this point, I wouldn't necessarily claim we actually experienced anything paranormal, but we definitely had enough weird stuff happen to make me want to set up a slightly more controlled and more formal investigation into some of the igloos in which we had our experiences.  It was a fun evening of playing around with some new equipment (such as a parabolic mic, which was really awesome) and talking paranormal with a fellow enthusiast.  It made me remember how much I missed actually getting out in the field for some ol' fashioned ghost hunting!