The Infamous Its a Small World Photo

Sorry for the weird sizing of the image below, but I wanted to make sure it was big enough for you to not only read the text, but to SEE the image of the 'hanging.'
As you can see, this is the infamous ghost Photo taken from Disneyland's It's a Small World ride. Now, to many people, this ride was already super creepy. According to Undercover Tourist, the version found at Disneyland dates back to 1964 when it premiered at the World's Fair under the name Children of the World. It contains at least 240 animatronics and a soundtrack that is guaranteed to get stuck in your head.

Robotime Rolife Nanci Blind Box Actio…
Fiction Series So Big, They Cross Mul…
Online Black Friday Deals for Cell Ph…
SONY Music and Michael Jackson Estate…
10 Best Hotels In Las Vegas
That many weird, moving Dolls would be a nightmare to all you pediophobic people out there---those with a fear of dolls. But, it gets even scarier. I've heard that the ride legitimately malfunctions quite often, resulting in riders having to be evacuated. That doesn't surprise me given the age of the ride and amount of trips it takes daily.
However, some aspects of the It's a Small World mythology are less believable.  Apparently there are a LOT of conspiracy theories out there about the dolls coming to life, riders and staff members going missing, and general creepiness experienced by visitors to the attraction. No doubt most of these are pure fiction, just like this photo below.
The photo and accompanying Story were uploaded in August of 2012 to the IMGUR site. However, the poster states that the photo is from a 1999 trip to the park.  During what appeared to be a normal malfunction, the poster and her family were escorted off the ride. Her mother decided to take the opportunity to use up the last of the roll of film in her camera. Upon exiting the attraction, the family noticed that there was an ambulance and police cruiser parked outside.
It is theorized that the photo captured from the ride shows either a suicide or accidental death by hanging. Some say the victim is one of the Disney cast members, and others believe it to be the body of a child.
Based on the size of the 'body,' I would automatically rule out the possibility of it being a cast member. And, honestly, as creepy as a story it makes, I don't think its a real person at all. I think it is one of the animatronic dolls. It is about the same size, for one thing, but another clue is its position. When one hangs himself, either on purpose or by accident, the arms and legs generally don't assume that position. The toes don't appear to be pointing down, as gravity would cause a real person's feet to react. Gravity would also not allow the arms to be slightly raised like that, either.
So is the original poster lying? Is the photo a fake? Did an unrelated accident occur that day to cause them to have to evacuate the ride? I cannot answer those questions, but I can confidently say that I don't believe this photo is either paranormal OR evidence of a deceased person. But, I'm curious to know what YOU think! Read the story below and then hop on over to Facebook and let me know what YOU think!
Stay Spooky. 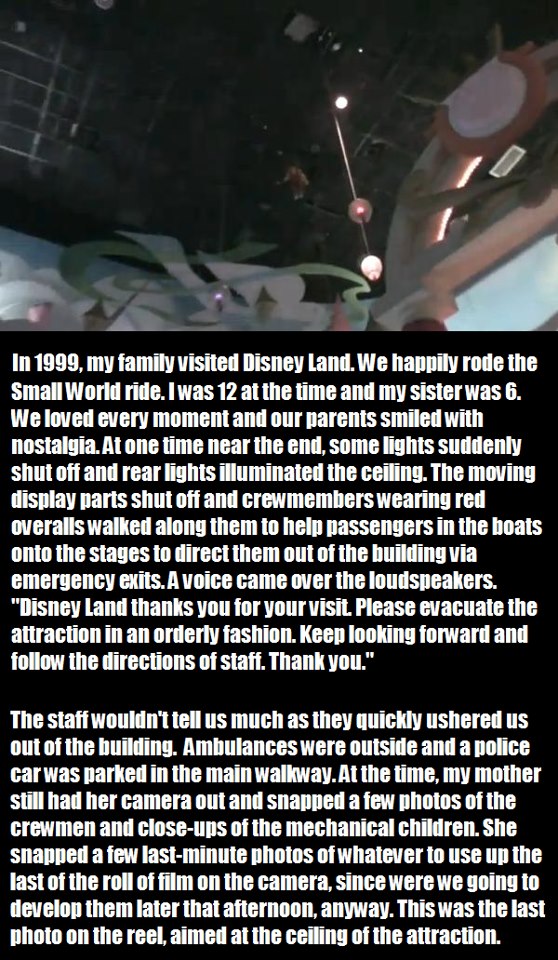 The Infamous Its a Small World Photo