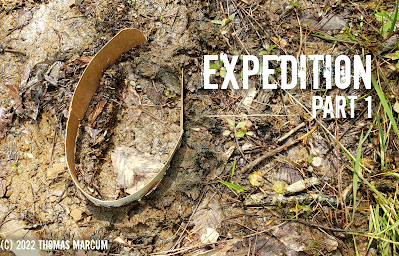 For those who might not know, I just spent the last week exploring the forest here in southeast Kentucky. I know some will tell you that there are no Bigfoot in Kentucky, but once again they'd be wrong. Heck, some have made a career out of being wrong.

Paris: Wonders of the 4th Arrondissem…
Do brain waves of a dying person show…
Mustache Jokes That’ll Give You a Goo…
Most popular jewellery this Christmas…
Résumé Red Flags: Post-Pandemic

Now, on to the Expedition.

My friend Guy Luneau, who came to Kentucky last year around this time, made a return visit this year on the first week of May. If you will recall, Guy and I had a visual sighting of a Sasquatch last year; a sighting in which we both looked at a Squatch through binoculars. We also found numerous tracks last year.

Guy, who is a retired chemical engineer and author of  The Ivory-billed Woodpecker:Taunting Extinction, made the long drive, around 11 hours, here to Kentucky and arrived on a Sunday evening.

We had spent many emails and phone calls talking about what and where we wanted to explore once he was here. We had discussed what track Casting we wanted to look for to add to Guy's collection. Of course, Bigfoot was on the list but there were several other tracks he wanted; such as elk and bear.

Monday morning rolled around and we set out early for the mountains. Not only was this going to be an expedition for bigfoot, it was going to be a chance to view numerous bird species that are migrating through the area. Guy has a wonderful gift when it comes to birds. He can name hundreds, if not thousands of birds just by hearing them sing. We viewed numerous birds during our adventure and I learned a lot about birds in general, thanks to Guy.

Our plan for the day, was to briefly stop by, what I call, Area 1 and check out the Gifting area and scout around for a few tracks. After that, we wanted to go to the area where we had our visual last year.

Once in Area 1, we made our way to the gifting rock. I had not been there for about a month and was not sure what I would find. There were some interesting results. 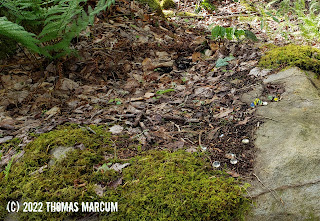 Of course, the food items were gone from the gifting area but so were several other non food items. This kind of got me a little excited. In the past, I had things disappear and return months later. But I had never had this many items go missing at one time. One figurine had been there for months and had never been taken. It was moved once before but this time it was nowhere to be found.

But one of the most amazing things, and it would get better, was the fact that two marbles were taken from the gifting area and placed on a near by fallen tree.

There would later be more activity involving the marbles, but that will be talked about in another post as it happened on a different day.
I'm somewhat reluctant to share information about gifting as I totally understand that any animal could have taken the food or knocked things around. It is the unexplainable things that make me really wonder and it gives me hope that things are moving in the right direction.
We finished up in this area by scouting around looking for tracks and stick formations. We found a few interesting stick things but nothing that was rock solid as being done by bigfoot. We moved on to the next location, which was about 20 to 30 minute drive away.
Once there, we donned our gear and started our hike to the area where we had the visual last year. Due to a lot of family sickness and the weather, I had not been out but once or twice this year, so the hike was more difficult for me than normal. There are several rather large hills to traverse but I knew it would probably be worth it. I wasn't wrong.
During the hike, we ran across several odd humanoid tracks and several possible Juvenile bigfoot tracks. The odd track looked like a normal bigfoot track but was unusually wide at the ball of the foot. It was very odd looking and we studied it and talked about it for a good while. The juvenile tracks, at least some of them had some decent toe definition. 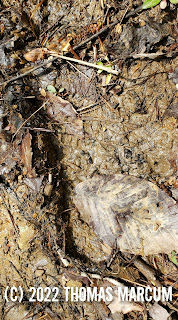 This track (left) and the other juvenile tracks, where all the same size and shape, but it appeared there was some toe movement. The tracks were roughly 6 inches in length. If you look at the print in the mud, you can see where the leaf was made moist from the pressure of the foot pressing down on it.
We made 3 castings of various juvenile tracks that we assume was from the same individual. One of the track castings did not harden up as we added water too late in the process. The two other castings turned out but I have a little more info about one of them below. Also, it seemed that this juvenile might have been walking the old muddy road by itself at times, but I would assume an adult was near by and later we confirmed this idea.
Over in another muddy area that was near by, we found what we think was the same juvenile track but this time there was an adult track with it. What was really neat was that the tracks kind of overlapped just a little. We had the very large adult track, roughly 16 inches, and the tiny juvenile track, about 6 inches, overlapping at the tip of the adult track. We had the idea to pour a casting as one big cast.
We let these casting dry overnight and returned the next day to dig them up. Sadly, as we were digging up the large, two track casting it broke. But the juvenile part appeared to be totally intact. The large part of the casting broke up but once it is all dried and clean, we may still have something that can be put back together or maybe some details will be visible. The other juvenile track casting appears to have turned out great.
By the time we got all this done, we were both wore down and decide to call it a day. We made the trek back out of the area and eventually home. Later that evening, not long before dark, we took a short walk to do some bird watching and listening. It was a great day and only the beginning to a solid week of exploration. This is real, boots on the ground research that few appreciate.
Watch for part 2 soon. 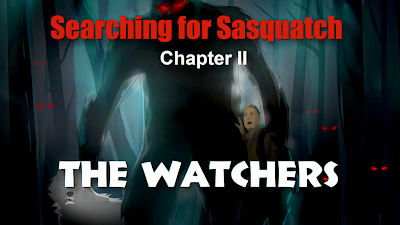