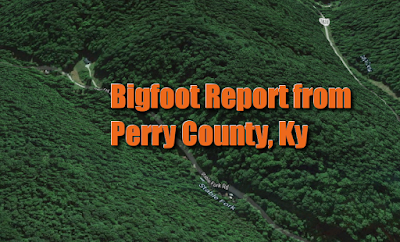 Bigfoot Report From Perry County, Ky
I got the following bigfoot report in a few days ago and wanted to share it with everyone. This comes from an area that is not too far from me. The area is very similar to my area here in southeast Kentucky and is idea habitat for a being such as Bigfoot.

I emailed  back and forth with the witness to get a few more details about his encounter.

Here is the report.
-Start Report -

How many Witnesses: One (myself)

On the above date and time, my family and me lived in a "holler" in the mountains of Perry County, Ky.. Specifically Stable Fork Hollow. This area is full of wild life, rattle snakes, bob cats, etc.. On this occasion my entire family and cousins were working in a huge garden across the creek, about a hundred yards up from the house. Around 1:00 PM I was sent to go back home and bring a pitcher of ice water. Nothing unusual occurred on the way there. However, on the way back, about half way, I heard what sounded like a huge rock slide coming out of a washout on the other side of the creek, like huge boulders. I then heard a giant splash in the creek. I could not see anything at this time as the trees were full and green, especially near the creek. Suddenly something began running up the creek, through the water. It sounded huge, something which obviously weighed several hundred pounds. Just the sound of the huge "steps" and water splashing put a cold chill through me. It then got up on the creek bank. What terrified me the most was seeing 3" thick saplings breaking over, with green leaves and foliage flying about. I thought one of our mules had gotten loose and was running up the creek. I became somewhat scared and began to jog at a rather fast pace. Whatever was over in the creek began to run as well, making an unbelievable amount of noise. Glancing over and down into the creek, there was a short clearing. I was shocked to see the back side of a huge upright hairy creature, which resembled a gorilla. It was walking now. The one thing which is burned into my memory is seeing it's muscles ripple as it walked. I became terrified, spilling all the ice water as I ran. I knew I had to get ahead of the creature and cross the creek. As I did so I refused to look down the creek, to my left, as this is where the creature would be. I then ran up the old logging road which led to our garden. The two mules were both there but having to be controlled by about five family members, they were obviously spooked.

I did not reveal what had happened, though my family could see I was obviously shaken. Ultimately, someone else went back for more water, and their trip was uneventful. As a side note, I finally told my story, once another family member told me theirs. It was my nephew (Dan). We got to talking and the subject of the "holler" where I was raised was brought up. I'll admit my nephew does like to party, is a hell raiser, but fears nothing. He has been shot, stabbed, etc.. Anyway, he advised me that "something" lives in the old holler, something terrifying, that has changed him.

He then told me of his encounter, which was only a couple of years back (summer 2017). He and a friend of his was in his truck, backed up into a wide place, in a small clearing, getting ready to drink some beer and listen to some music. It was dark at this time. And believe me, in this area it gets really dark. My nephew exited the vehicle to relieve himself. He was about 10 feet behind the truck, near the tree line. He said he felt like he was being watched. Suddenly something in the woods jumped straight up, making a horrible racket. It then began to grunt and growl, which he said he would never forget.

He knew it was not human, but no animal he was ever aware of either. He stated whatever it was was gigantic and ran off, parting trees as it did so. He scrambled back into the truck and tore the hell out of there, without saying one word to his friend. They drove until they were back in civilization and a lighted area.

I spoke with his friend as well. He didn't see or hear anything but stated my nephew was snow white and unable to speak for sometime. He had never seen him rattled to such a degree. Dan then told me he was quite sure that he had encountered a sasquatch. For some reason he feels that there is more than one creature in this area. He no longer goes up in this area after dark. I plan on taking a camping trip there sometime this fall. Sorry if this report was too long or filled with too many details! This was a first for me. I will close for now. Take care.

TM: Do you remember what color the being was? Are there any more details you would like to share?

Thomas,
The creature appeared to be rather dark brown in color. I could see him from behind (never saw the face), from about the calves on up. He was well lit by the sun for approximately 5 seconds or so. Did not have a view of lower legs or feet. I'm quite sure the creature was fully aware of my presence. I actually feared for my life. I was half way between my house (no one home and no doors that locked back then) and the safety and security of my entire family. I chose to run toward my family. I had to stop at one point, due to being winded. The creature stopped as well. When I began running, so did it. Again, I'm sure that when crossing the creek, this creature was standing within 5 to 10 feet of me but I refused to look in that direction. I'll never forget the initial sounds and seeing saplings and trees going down, with large green leaves flying about. If I can be of further assistance, please let me know.

Thanks to Tommy for sharing his encounter with us. I would say that was very frightening for sure.

If anyone else had an encounter or sighting in that area, then please let us know.

It’s Me – Chapter 11
Top 10 Sites to watch Telugu Movies O…
Sex Tips for Men: How to Be Better in…
Crunchyroll – How to Watch Anime Onli…
Podcasting