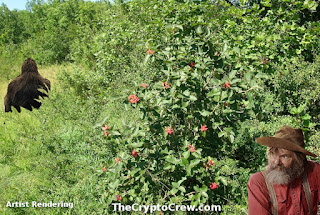 This next report/story is a pretty good one. I only have part of the story but the part I have has some pretty good detail.

Imagine being out in basically the middle of nowhere, being alone and hungry. No one around and you haven't seen another human being in a long time.  According to the story that is the state of one man who saw two bigfoot.

Here is more on the tale.

Ah the gold rush days. You don't hear so much about it nowadays but for many years and decades the opportunity to become wealthy by striking it rich with a gold mine or while panning for gold was the dream of a lot of people.

This dream often didn't turn out so good for the majority prospectors. Many were killed, gave up or just went broke.

In 1918, a German gold prospector in Wrangell, Alaska, had finally gone bust chasing the gold dream. He was half starved to death and skinny as a rail when he left from the northern mining camp. He was on a quest to find something to eat and make his way to a settlement. He came across some fireweed plants and sat down to picked some young sprouts to mix in with some berries.

After eating all he could handle of the mixture, with the warm sun on his back, he fell asleep on a bed of grass. Sometime later he is awoken by someone talking near by. The prospector got a little excited to finally have some company. He was also in the need of some directions to the nearest settlement.

He slowly crawled his way around the bramble bush thorns, eager to see who was talking and meet them. This is when he said he saw a bush woman, aka Bigfoot, sitting on the ground feeding a smaller one berries. The large Bigfoot had the smaller one sitting between it's legs feeding it berries by hand.

According to the story, the prospector only watched for a short while because he was scared of the large creature. But during that short time he said heard the larger female talking to the smaller one. He also stated the language was Native American or by his own account Indian language.

Now, this is a story supposedly told by Alice Petermann to her grandson Elwood Petermann in 1947. The best I can gather is that Elwood actually relayed this story in writing, possibly in 1947, that was told to him.

Unfortunately, the link to the "rest of the story" no longer worked and I could not gather more information about it. Of course, there appears to be no way to verify the story, but it does sound possibly true.

If we look at some of the details we might get a glimpse at some Bigfoot behavior. If the story is true, we see that there is a maternal behavior to take care of the younger Bigfoot and make sure it is fed. That their hands and movements during the feeding appear to be in line with humans. They, to no surprise, know what to eat in the forest. We also see that they do speak and have a language. Which I can also confirm that they do speak as I have heard them on a few occasions.

So, there you have it, another old report/story that is interesting and very possibly true.