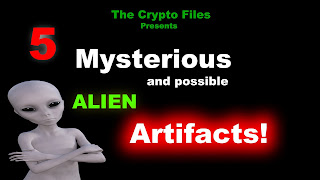 I thought it was time to change it up a little bit. So, today we are going to look at 5 fascinating artifacts that, more often than not, are thought to have an Alien origin.

Some of these are not without controversy but puzzling nonetheless. I will give you a brief overview of each artifact but to learn more, please watch the video.


5. The Guatemala Stone Head - Over half a century ago, deep in the jungles of Guatemala, a gigantic stone head was uncovered.

4. The Williams Enigmalith - In 1998, electrical engineer John J. Williams discovered what looked like an electrical connector sticking up out of the ground.  A very unusual item. This object is considered an Oopart,Out Of Place ARTifact, it is a term applied to dozens of prehistoric objects found in various places around the world that, given their level of technology, are completely at odds with their determined age based on physical, chemical, and/or geological evidence.

3. The Ubaid Lizardmen - At the Archaeological site of Al-Ubaid, researchers have found numerous pre-Sumerian artifacts dating back at least 7,000 years. The figures are male and female. Are these statues of a Reptilian Race?

2. The Sri Lanka Meteorite Fossils - A group of scientists claimed proof of extraterrestrial life found in a meteorite  found in Sri Lanka in late December 2012.

1. The Betz Mystery Sphere - A bizarre, allegedly self propelled, seamless metallic orb was discovered by members of the Betz family in 1974. Just what was it?

So, what do you think? Could some of these be proof of alien life?