Bigfoot Reports From The Web 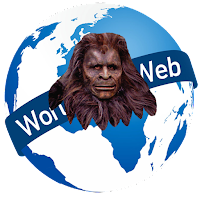 There is no doubt that the bigfoot community has a very wide range of personalities. Everything from the serious researcher to the armchair researcher. From the over zealous to the delusional. The bigfoot community can bring out the best and the worst in people. It can provide a much needed laugh or make you so mad that you want to scream. It can make you want to quit following the phenomenon of bigfoot and at other times gives you a drive to press on.

With all that in mind, today I want to gloss over some of the more popular report and stories that have been making the rounds on social media and other outlets. I will offer a short narrative for each and share my general thoughts. 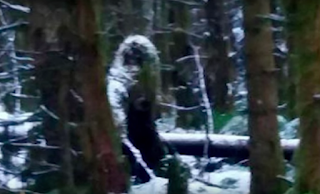 Maxine Caulfield took this picture in Antrim county, Northern Ireland. Maxine was out walking her dogs in a forest that is said to be haunted. The dogs were acting funny and she reportedly felt a presence. Many speculated the figure was a possible bigfoot. She, Maxine, does not know what the figure was, but said it "..freaked her out."

Now, we have all felt a odd or strangeness from time to time. When we do it is sometimes easy to let our minds run wild with speculation. Normally we don't have a camera or think to take pictures. But nowadays almost everyone has a cell phone, so we have more opportunities to get a photograph. In the case of this picture by Maxine, there is clearly a humanoid shaped figure but just what is it? In my opinion, it is most likely just a tree stump with snow on it. If you will notice there happens to be a downed tree right beside it. What would be great is an after picture, that would clear it up for everyone. 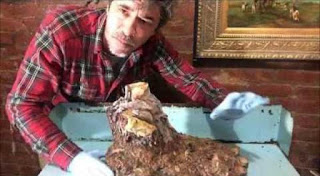 This next one is by a man who is gaining popularity in the bigfoot world. His name is Peter Caine. He released a youtube video of what he said was the severed foot of a sasquatch. The video was posted in a lot of bigfoot groups on facebook. People seemed very excited and many believe the foot to be real. Mr. Caine seems so sincere and his back story seems believable. The only thing is most people did not take any time check the guy out before sharing his video. First, he is an artist, who makes figures and odd looking puppet things. He is also a comedian. If anyone would take the time to view his other videos about bigfoot, you would see he post a lot of them. He also has a Bigfoot hand, a Bigfoot head, a bigfoot living in his farm house, captured a bigfoot, farmer steps in bigfoot poop, and he also has many others that include bigfoot oral sex, bigfoot masturbating, and more. He also does some UFO videos. If you will look at some of the comments on his videos, some people have caught on that he is making satirical type bigfoot videos. Other, unfortunately have not and don't even realize he is poking fun at the subject and in some cases them. Some are even asking about DNA testing on his bigfoot parts.

See I told you the bigfoot community/world has a wide variety of characters. Ha ha.

Last one for today. 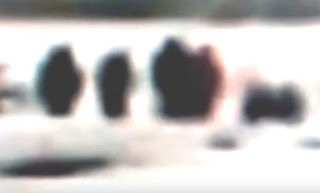 Once again, a bigfoot family has been caught on camera at Yellow Stone park. If you remember this happened once before, but it is my understanding this is another event. I think the first time it was mostly ruled out from being bigfoot and considered by most to be park rangers or buffalo. But with this new event what will the final conclusion be? As you can see from the still frame, it is super blurry and you can't see much detail. The figures do appear humanoid in shape but you can't really say for sure what it is. There is a video of this event, found here, if anyone would like to study it over. I can't offer much opinion about this one, as I really don't know much about the area and have not attempted to study the video.

So, there you have it, three bigfoot related stories/reports from the cyber world. I know this is not in any way, shape or form an in depth analysis, but I wanted to share some thoughts and information about some of the more recent and popular bigfoot stories.

I would be happy to hear what you think about each one of them.

I hope you have a great day.

Bigfoot Reports From The Web