For many of us the idea of a bigfoot type of creature existing in Australia is not a very big leap. I know that bigfoot is very much a real creature here in North America, so I find it very plausible that the Yowie is also a real creature.

The Yowie is hominid that is said to live in the Australian wilderness. It is often compared to bigfoot, sasquatch and yeti. The Yowie is often described as being hairy, standing upright, and reaching heights of 6 foot to 12 foot tall. It is said to have a large flat type of nose and large feet. Reports about the yowies behavior ranges from timid and shy to very aggressive. Again, this is something we hear very often about bigfoot behavior.

The possible game camera footage of a Yowie was taken in the Forest Queensland Australia. The south east region of Queensland has had more reported sightings of Yowie than anywhere else in Australia. While many seem to always discredit or ignore sightings report, it should be noted that a former Queensland senator,Bill O'Chee, reported about seeing a Yowie while on a school trip to Springbrook. 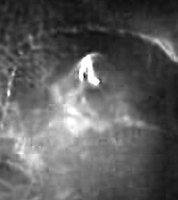 Before we get to the actual video, I wanted to attempt to enhance a still frame from it. As with most game camera videos,that are shot at night, there is an over brightening, reflecting or glare. I have seen this many times with my own videos. So I want to attempt to adjust a still frame and maybe get a better look at this figure.  I zoomed in on the figure and tried to adjust the lighting. It appears you can see the head and arms. Some suggested this was a dog, but for me the arms are just wrong for this to be a dog. 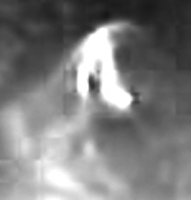 I then just zoomed in on the head of the figure. It appears very odded shaped in appearance.  I guess some could consider the face to be monkey/ape looking.

Now, lets get to the video and the background about it. The video was shot in March of  2014 by Jason Heal, also know as JHYowiesearch. Mr. Heal had placed an apple out as bait. The apple was on a large rock. The figure is seen at this large rock. It appears to be very cautious in approaching the bait. Apparently the IR from the game camera is nothing the Yowie is concerned with or maybe it just can not see it at all. While watching the video below, look for what appears to be the eyes blinking and glowing.

Here is the original video, after that will be some final thoughts and more information.


Some people had criticized the video and ask why the camera was shut off or why did you stop filming. Well, game cams normally have a set recording time. I take it this one was set to 15 seconds. I have a couple of game cams that only record video for 15 seconds. Of course, after that there is normally some type of delay before the camera records another 15 second and usually by then whatever set the camera off is out of camera view.

Some other people suggested this couple be a puppet or something artificial but that is just speculation on their part. You always get some of that regardless of what you present to the public.

The size of the figure is very hard to determine as we really don't have anything for scale. I'm sure Mr. Heal is familiar with the area where he set up the camera and has a pretty good idea of the size of it. I went to the youtube video page of this video and looked over some of the comments, most are positive and Mr. Heal has replied to almost all questions, best I could tell. He also uploaded an enhanced version of the video, you can find it on his youtube page.

I also explored Mr. Heal's youtube channel and several other videos of his. There is one or two that are really interesting. There is one where he finds some tracks in the mud and they are inline (one foot in front of the other) just like numerous bigfoot tracks that I have personally found. Then he has some videos of stick formations and structures and again very similar to ones I have found and other researchers have found.

While of course I can not say for sure if the video is 100 percent of a real yowie, I can say Mr. Heal has some very intriguing videos on his channel. He is actually going out and trying to gather evidence and actually getting in the forest. We wish him good luck with his research efforts. I hope that everyone will check out this other videos.

I would also be interested in hearing what others have to say about this video of a possible Yowie. Leave a comment.

(Interested in sponsoring a story? then send us an Email!)
70+ videos & 650+ pictures  on our facebook site check it out by clicking the link below.
facebook.com/TheCryptoCrew
Have you had a close encounter or witnessed something unusual?
Send us an Email
We Accept Guest Posts - Send Them To Us!
(All Submissions Subject to Approval)
Send us an Email
Help us!
Help Support The Crypto Crew
Now you can get our blog on your Kindle!
The Crypto Crew blog for Kindle