Ladies, are you a Woman that briefly looks at a man you find attractive with a sexy gaze and then averts your eyes? Have you ever dropped something in front of him so he could pick it up and hand it back to you? Then guess what, by 1952's standards, you're a certifiable slut!

Letter from William Shakespeare Disco…
Best Story-Rich Games on PC: November…
Beautiful Celebrity Couple Pics
Today I am thinking about who I am wr…
How to battle decreasing Testosterone 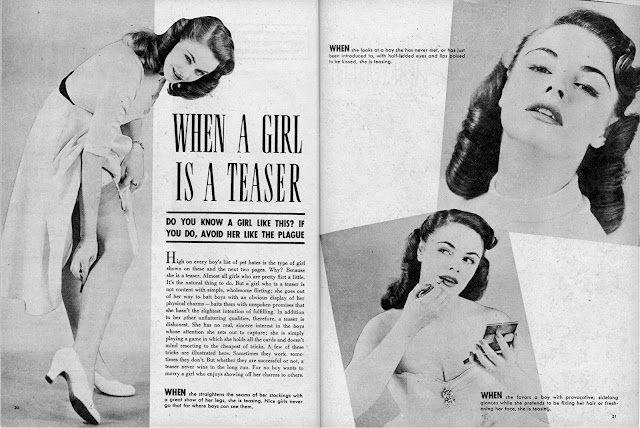 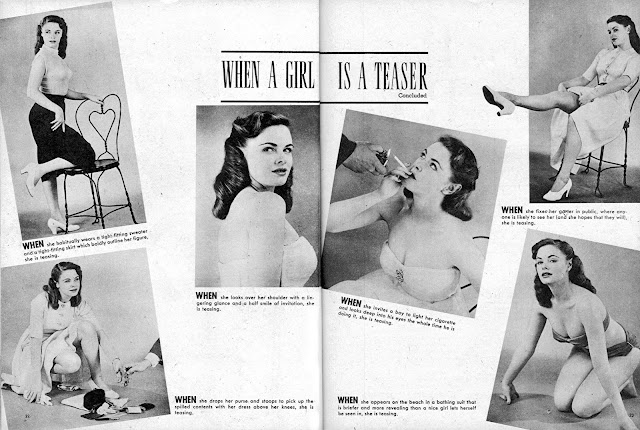 This highly informative article comes from the November 1952 issue of "The Boyfriend And the Girlfriend" magazine; a juicy find on Flickr credited to the user clotho98.

"High on every boy's list of pet peeves is the type of girl shown on these and the next two pages. Why? Because she is a teaser. Almost all girls that are pretty flirt a little. It's the natural thing to do. But a girl who is a teaser is not content with simple, wholesome flirting; she goes out of her way to bait boys with an obvious display of her physical charms -- baits them with unspoken promises that she hasn't the slights intention of fulfilling. In addition to her other unflattering qualities, therefore, a teaser is dishonest. She has no real sincere interest in the boys whose attention she sets out to capture; she is simply playing a game in which she holds all of the cards and doesn't mind resorting to the cheapest of tricks. A few of these tricks are illustrated here. Sometimes they work, sometimes they don't. But whether they are successful or not, a teaser never wins in the long run. For no boy wants to marry a girl who enjoys showing off her charms to others."

Well, there is a lot of truth in that and that hasn't changed much today. Very few men would want to marry a woman that constantly flirts with other men and vice versa.