(Full disclosure: I received a free copy of this book for review from the publisher, as well as an electronic ARC on Edelweiss.)

Humanity continues to kill, to massacre, to persecute, with increased ruthlessness. Before eyes that are increasingly indifferent, passive. When not complicit. There’s no pity for the elderly, for women, for children. There’s no pity for anyone anymore. Man is wolf to man, today as much as – and more than – yesterday.

The older generations seem to have learned very little; the new ones don’t seem to want to learn any more. Wars continue to sow slaughter. Behind the barbed wire of new concentration camps, it has gone one; humanity has gone on being suppressed.

Most of all, this Book aims to be – attempts to be – a contribution to the just “revolt” on behalf of those who feel like they can’t, in spite of everything, resign themselves to a monstrous, terrifying reality. Those who believe they must still and always “resist.”

Born in 1923, Arturo Benvenuti – poet, painter, researcher, accountant, and banker – was just a young man during World War II. Yet his lack of civil engagement haunted him for decades, and the feelings of guilt and powerlessness – reflected in his poetry – eventually proved the impetus for the KZ Project.

In September of 1979, at the age of fifty-six, Arturo and his wife Marucci loaded up their camper and began what would become a lifelong journey: traveling throughout Europe, visiting former Nazi concentration camps (including Auschwitz, Terezín, Mauthausen, and Buchenwald), and meeting with as many survivors and veterans as he could. He also combed through local history museums, public libraries, and public archives, trying to piece together “visual testimonies” of the camps.

From this, KZ: Drawings from the Nazi-Fascist Concentration Camps was born. (KZ is the abbreviation for Konzentrationslager, which is German for “concentration camp.”) Originally published in April 1983 with a not-profit edition, the 276-page book included as many black-and-white photos of drawings created by survivors of Auschwitz, Terezín, Mauthausen-Gusen, Buchenwald, Dachau, Gonars, Monigo, Renicci, Banjica, Ravensbrück, Jasenovac, Belsen, and Gurs – as well as a few pieces of artwork contributed by veterans who helped liberate the camps.

Nearly thirty-five years later, Skyhorse Publishing has released a new and (slightly) expanded edition. While the artwork remains the same, the 2017 edition includes several poems written by Benvenuti (which he chose to omit from the original edition, in lieu of letting the images speak for themselves). In addition to the original introduction written by Italian Jewish chemist and Holocaust survivor Primo Levi (several years before his death in 1987), the book contains new essays by Roberto Costella (“KZ: A Resounding Echo”) and Giampietro Fattorello (“KZ: To Future Memory”).

It’s difficult to understate the raw emotional power of the images captured within these pages. Words fail me, which is kind of the point of this book, no?

The collection consists of 276 drawings rendered in pencil, ink, and charcoal, from 98 different artists. (I counted.) Some of the images take up most of a page or a full spread, while others are grouped two to a page. 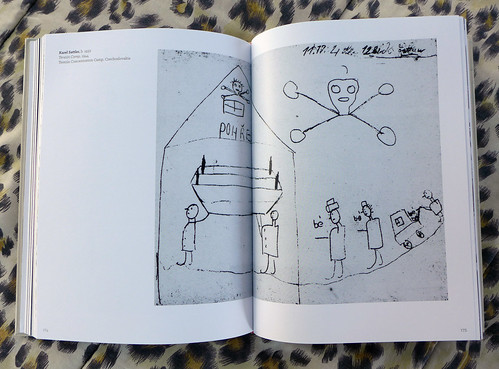 Whereas some survivors are represented with just a single image, others have small collections. The style and technical know-how seems to run the gamut; while some artists look to be amateurs, others are obviously quite skilled. 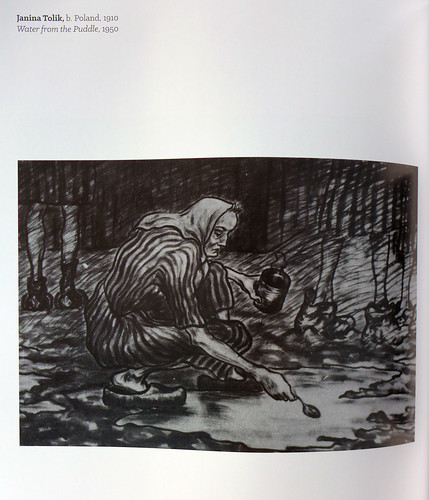 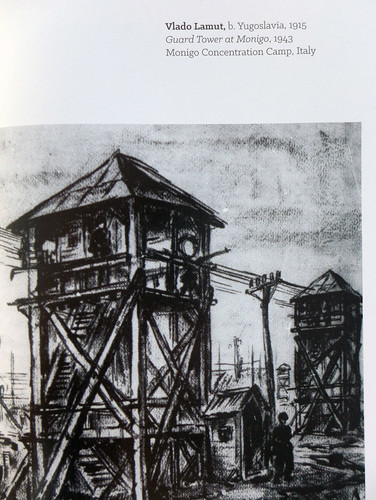 There are some really lovely drawings here – including portraits and landscapes – as well as a few more abstract pieces. 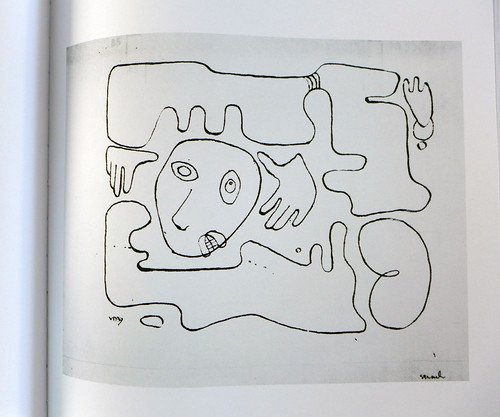 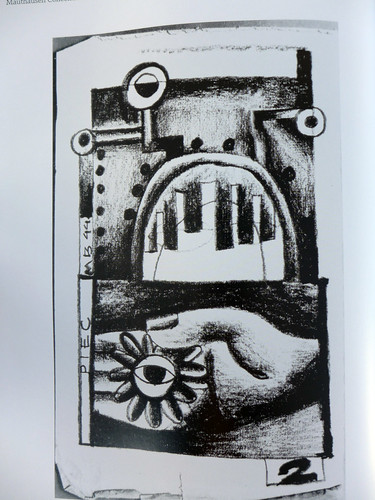 Much to my surprise, I even spotted several drawings done by children. 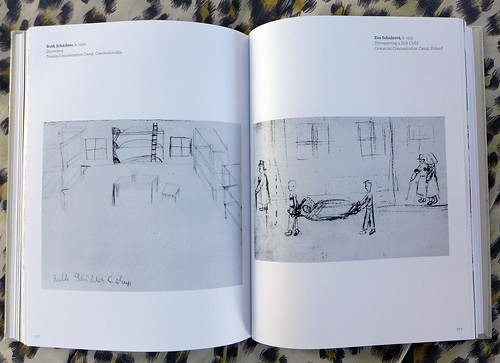 (If these don’t shatter your heart into a million pieces, you probably don’t have a heart to begin with.)

One even looks disquietingly like the sort of artwork a parent might hang on their fridge or cubicle wall. 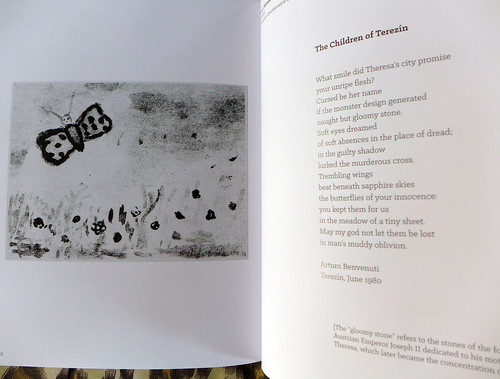 The overall design of the book is very minimal, in keeping with the original. Each image is accompanied by just two or three lines of text: the artist’s name; her or his date and place of birth; the drawing’s title; the date(s) it was created; and the name of the camp in which the artist was imprisoned. Benvenuti’s poetry is paired with images that either reflect the theme, or were birthed in the same camp. For example, “The Children of Terezín” is paired with a drawing of a butterfly done by Doris Weiserová (born in Poland in 1932), while “The Stone Stairs” appears alongside “Work in the Rock Quarry” – both depictions of the rock quarry at Mauthausen.

As a result, the reader’s attention is focused squarely on the drawings. Yet with so little information available about the artists, I found myself aching to know more about them: How old were they when they were sent to the camp? When they escaped? Did they continue creating art later in life? Were they artists before their captivity? How were they able to keep their drawings secret and safe, to smuggle them out into the world? Which of these artists were veterans, as opposed to prisoners?

The work of one artist in particular – Russian-born Sinowi Tolkacev, imprisoned in Oswiecim Concentration Camp in Poland – appears with official-looking stamps or documentation. 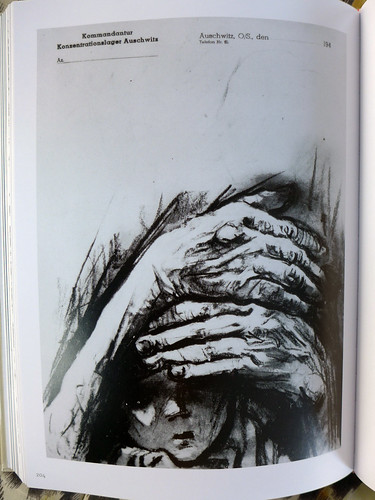 I would love to know the story behind these images. While the layout of the book certainly makes sense, the dearth of text left me wanting more. A brief bio about each of the artists, placed at the back of the book, would be great (although I certainly understand the difficulties inherent in this).

Still, this is an essential collection for historians and artists alike – as well as anyone who’s interested in viewing the Holocaust through a different lens. (It’s not often I see the role of art covered in books on the Holocaust, whether nonfiction or otherwise.)

In his introduction, Benvenuti laments that we’ve learned little from our past mistakes; in light of tragedies like the Rwandan genocide, the destruction of Aleppo, and the treatment of refugees by developed nations, to name a few, the slogan “Never Again” feels like just that: empty words, meaningless rhetoric. And with Brexit and the election of Drumpf – a man who openly courted the white supremacist vote and openly bragged about sexually assaulting women – many Holocaust survivors see the past repeating itself. Shamelessly, nakedly, terrifyingly. 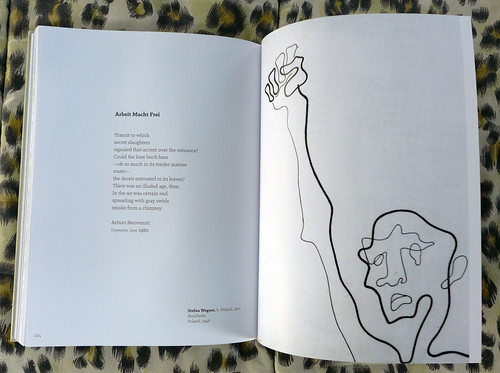 More and more, I find myself ending reviews with this one refrain: this is a book we need now more than ever. And it is. The power of art – to foster empathy and compassion, inspire bravery and rebellion – cannot be underestimated. And these artists have so much to show us. It’s up to us to listen, to learn – and to do better.

(This review is also available on Amazon, Library Thing, and Goodreads. Please click through and vote it helpful if you’re so inclined!)