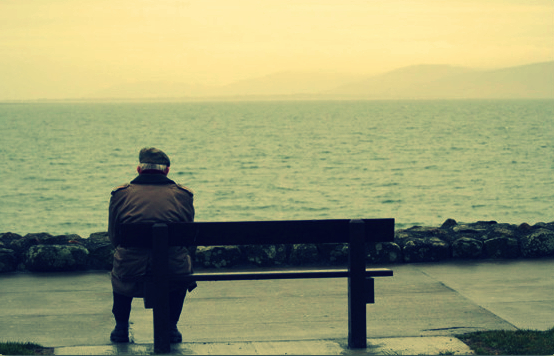 No one can see it, but I'm suffering from a disability. Everything about me looks “normal.” I have an inflammatory disease which I see as permanent, though I'm about to have some relief in a week or so. It affects all the muscles and racks the nerves in my body. In spite of your concern, you aren't experiencing these symptoms. Now, spouse and friends may say they “feel your pain,” they don't, while with their prayers they console themselves into believing they're doing something. I want to keep it that way; I want that distancing. Unremitting pain is hell, but fortunately, there's a lot to distract me from it. It's a bitch, but I'm damned if I'll let it win. And it's natural for people to be sympathetic about the sufferings of the debilitated, but after a while, they find such sufferers aggravating. (I know one woman who believes her sister, a resident in an assisted-living facility for years, was overdosed on morphine. After so many years, it had to be a temptation for the caretakers.) Everyone is expected to be healthy, to pull his and her own weight, to “do your part.” For the record, it's just the way things are.

This is about being alone in one's own suffering. It's also about being alone in one's own experiences, those that one can't possibly explain, because they're so personal, like those of the lone astronaut left alive in “2001 The Space Odyssey.” Many gays have had to accept isolation. Call these experiences a gift or a curse; they isolate you from those around you, permanently. Somehow, it doesn't help to know others feel the same, and understand. Right now, there are men and women in their 70's who are weeping as they remember the molestations they lived through when they were in their teens and single digit ages. The survivors of holocausts, rape, and wars are alone in their sufferings. No one understands, and everything is buried within them; for those are the terms society is willing to accept for what it cannot and is unwilling to understand. Many of them die lonely, by suicide, the ultimate aloneness.

I cannot help but feel outside humanity, and that's probably been the norm since I was a kid. I was molested myself, at the age of seven, so that experience might explain this, and it may be other victims share the same relationship with the world. Personally, this has not been altogether a negative. Sure, I got picked on for feeling “different” and relied on a family with no idea why I'd suddenly become a bad boy who got into all sorts of trouble. My siblings had their own problems. There was no one to confide in to tell my experience to. Hell, I wasn't even aware of the effect it had on me.

There was never a God or secret friend. Being different meant being all alone to figure out solutions on my own, and to make sometimes disastrous decisions on my own. Without being able to share feelings, thoughts and opinions, I had to deal with them alone. (Even now, I hate support groups.) I learned to cope with unexpected situations, to survive by being passive-aggressive, long before the term was known. This made me intellectually and emotionally independent. Perhaps some are born into solitude, while others have it forced on them.

Considering those who chose to work in solitude, those inventors, novelists, philosophers, discoverers, etc., such as Darwin, James Baldwin, preferring solitude looks like a very good thing. In fact, for some individuals, it's the best way to be. Compare their lives with those of “holy” individuals who have embraced solitude. There's a big difference between us and them. The “holy ones” want to be alone so they can wrap themselves inside themselves, call this enraptment ”God” or “Presence,” and ponder what they learned about the God and/or Presence by intellectually masturbating in their minds. I have read some of their accounts. They interpret their thoughts in solitude as a great access to spiritual wisdom. Our solitude, on the other hand, involves being intellectually engaged in the realities outside ourselves.

I take my place among a long line of traditional loners: independent heretics, blasphemers, and freethinkersNow, I understand there are people who need people, mostly women, who feel incomplete without others. Many find this need met in congregations. This is one reason I would never fit into a church group. I'm a loner who just happens to go through the minimum of motions to function in society. Now, regular churchgoers will never relate to me, and I understand why. It's against my nature to want to be among those who don't want to think with any depth. For example: They may be shocked if I mention their Jesus might have been thought to be gay in Jewish society, where it was expected a man of his age should be married with children. People go to church to avoid uncomfortable truths that I accept. This applies to any freethinker in that setting. Nobody wants to hear about your struggles with and overcoming of doubts, in the same way society wants to keep the poor and victims locked away out of sight. This makes me an outlier, if not an outcast. It's an honor to be a failure in such company.

And so I take my place among a long line of traditional loners: independent heretics, blasphemers, and freethinkers who are condemned, shunned, persecuted, and ignored. Despite our solitary state, maybe we have an obligation, a burden: We loners are needed, so we shouldn't keep our mouths shut. Usually, it takes a very long time until, “The freethinking of today becomes the common sense of tomorrow.” All of which is to say, to those who are suffering with the loss of friends, family, and community: it's okay you are alone. Think about it. Maybe, just maybe, you always have been. You just never had the chance to think about it before. There are worse things, such as being welcome as long as you agree not to be yourself. Meanwhile, I and my pains will have to be as one person.