The open mic session at The Telegraph at Earl of Derby pub (Dennetts Road SE14) continues to go from strength to strength. It was a full house last week (21st October) with featured act Bolt the Door. They started out with 'Last night's fun' which as well as being a well known Irish Reel it also the name of one of the best books written about traditional Irish folk sessions (discussed here before). They also played a version of the North East song 'When the Boat Comes In'.

benefit of coconut milk
What to wear: outfit ideas for Christ…
Karen Wiesner: The Stories Behind Cla…
9 Tips for Writing an Engaging Resume
Florence in One Day: How to Plan the …

The Open Mic at the Telegraph is on every Thursday, if you want to sing/play turn up early and put your name down.

As for Bolt the Door, they've been booked to play in the pub in their own right, playing there on every second Saturday in the month from 6 pm - next one on 13th November. 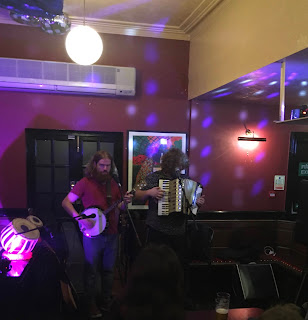 This post first appeared on Transpontine, please read the originial post: here
People also like
benefit of coconut milk
What to wear: outfit ideas for Christmas & summer
Karen Wiesner: The Stories Behind Classic Fairy Tales (Woodcutter's Grim Series), Part 3
9 Tips for Writing an Engaging Resume
Florence in One Day: How to Plan the Perfect Itinerary
The best skincare routine for combination skin
Full-Time Gambling — Viable Profession or a Fool’s Trap?
Single Premiere ‘Back To Chicago’ Lauren Anderson Feat. Mike Zito
Demi Lovato Doing Jiu Jitsu
Variations of Online Slots
7 Benefits Of Corporate Training
Apple Starting iPhone 12 Production Soon in India
“The Friend Who May Not Seem a Friend”: The Cat and the Fire, Part 1 of 3
30 Day New year, New You challenge you need in 2021