An Anti-Slavery Speech in Deptford, 1830

In November 1830 one B.C. Challis gave a lecture that was published shortly after as 'The Substance of a Speech on Negro Slavery. Delivered at the Rev. Mr. Barker's Chapel, High Street, Deptford, on Tuesday Evening, 2nd November, 1830'. The whole text is available to read online and while some of the language is archaic, it is a passionately argued case for the abolition of slavery. 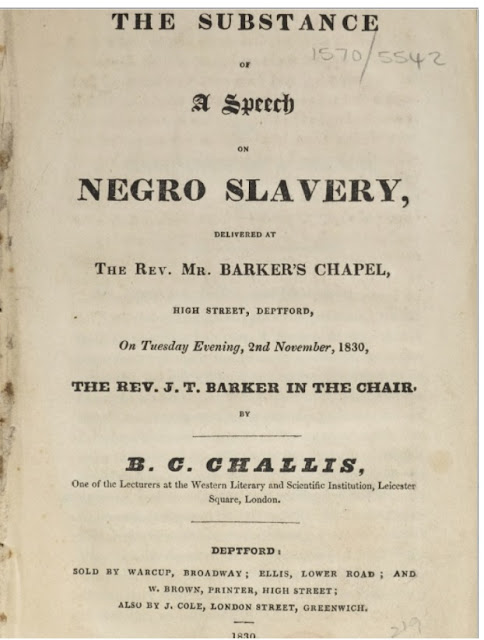 Modern historians of slavery are quite rightly critical of a narrative of British 'white saviours' leading the abolitionist fight, and there is scepticism about the motives of some who may have been concerned for instance with wider colonial interests (such as undermining the French in the Caribbean who were arguably more dependent on the slave trade continuing).

It is important to recognise that Slaves themselves continually resisted slavery and in this sense were a key driving force in its abolition.  There is an echo of this within this speech, with a reference to the successful slave revolution in Haiti (described as Saint Domingo here): 'Who can for a moment doubt that this great island, under the dominion of a free negro population, situate in the very centre of the West Indies, and contiguous to the large and populous islands of Cuba and Jamaica on the one side, and Porto Rico on the other; who I ask, can doubt that the government of that island, will take every occasion to stir up the surrounding slaves to insurrection?'. The author uses this threat to argue that the abolition of slavery is actually in the interests of the 'white inhabitants' as the alternative is that 'the lives and immense property of the colonists be thus exposed to destruction'.

Some of the specific proposals put forward here seem rather feeble now, such as the suggestion of gradually abolishing slavery by starting with young women (whose children would then be born free).

Nevertheless it is also important to acknowledge that rank and file slavery abolitionists were putting forward what was, in the context of the growing British Empire, a principled and radical assertion of equality and opposition to racism.

Of course there is criticism of how slaves are treated:  'And, now then ye degraders of humanity ! -the best of your slaves are allowed but one pint of corn meal for their day's allowance, which is no more, and no better, than that which every gentleman's sporting dog has in England. They are flogged - abused and mutilated, whether feeble, decrepid, or lame, - spurred on to a laborious task, in a sultry climate, without encouragement or reward'.

But more than this there is a recognition that slaves are people with the same rights to liberty as anybody else: ' although the system of Negro Slavery demands all the force of intellect in its defence, yet it requires only a sense of justice , an universal sentiment of execration, and a determined intention to do unto others , "as we would they should do unto us ”.  It requires I say, only the belief and practice of that one golden precept of our holy religion, to induce us, at once, to hate, to despise, and to abolish it [...] I am sure you must all feel such a just sense of horror at the thraldom, which is entailed upon the black, by his merciless owner, who differs from him only in the colour of his skin, and an anxious desire of breaking their bonds?'.

At the end of this meeting in Deptford, 'Several resolutions were then read and carried, and a Petition praying the Total Extinction of Colonial Slavery adopted'. Those involved obviously wanted to disseminate the message further as they took the trouble to print it. We are told that it was available in Deptford 'sold by Warcup, Broadway; Ellis, Lower Road' and W. Brown, printer, High Street; also by J. Cole, London Street, Greenwich'. 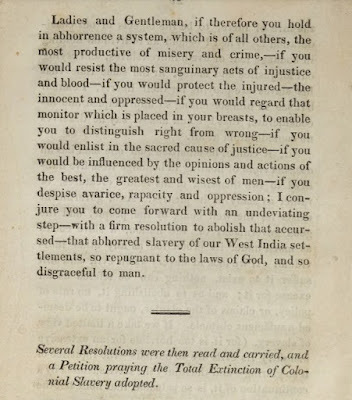 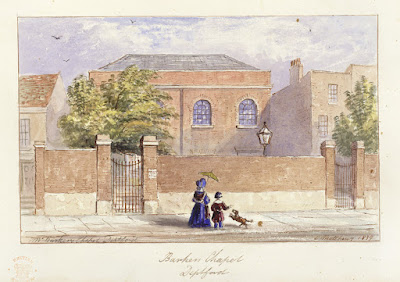 An Anti-Slavery Speech in Deptford, 1830