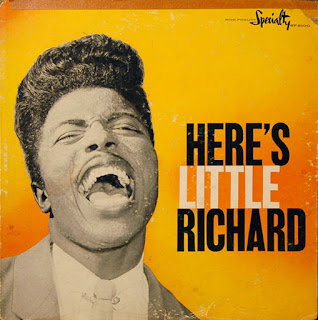 The first time was on 31 October 1963 as part of an amazing line up that also included the Rolling Stones, the Everly Brothers, and Bo Diddley. But on that Halloween night there were some famous or soon to be famous names in the audience too.  According to 'History with the Beatles' by Bradford E Loker (2009), George Harrison attended this concert  having earlier that day arrived from back with The Beatles from a trip to Sweden and been greeted by thousands of fans. This was to prove to be a fateful day in pop culture history - American TV presenter Ed Sullivan was passing through the airport and on the strength of witnessing this outbreak of Beatle-mania booked them to appear on his TV show, the legendary appearance on 9 February1964 kicking off the 'British invasion' of the US pop charts.


Also in the audience in Lewisham was a 17 year old David Jones, later Bowie: 'After seeing the Rolling Stones perform on the same bill as Bo Diddley and Little Richard at the Lewisham Odeon in October 1963, he was desperate to perform R&B rather than teen pop' (The Man Who Sold The World: David Bowie And The 1970s by Peter Doggett, 2011). As was common in those days, the acts performed short sets twice over the course of the evening - according to this advert there was a 6.30 and a 6.45 show


Support band The Wild Angels were said to 'not score too highly on either originality or technique, but they play with such energetic determination that they more than keep the customers satisfied. They don't leave space for even the most aggro prone ted to start yelling for the star of the show'.


Booing there soon was though as after lengthy delays the back up band took to the stage and played for too long without sight of the singer:  'Before the riot could start the warm up man announced Little Richard. With one bound he was on top of the piano, accepting the adulation of his loyal fans in a nifty one piece, red, spangled creation that showed everyone that after 26 years on the road, his figure was still built to please. It looked as though everything was going to be alright. The band kicked off into a tight, functional 'Good Golly Miss Molly' that was traditional enough to mollify the grease. Then Little Richard sat down at the piano and started to sing. The awful truth became apparent that both his voice and piano were totally inaudible... After a few more tries he finally had to instruct the band to turn down. At least, after that he could be heard, although his voice still sounded as though it was coming from deep under water. From then on, all thoughts of music went straight out the window... At the end, nobody asked for an encore'


Farren concluded: 'Nobody likes to schlep all the way to Lewisham to be let down. For me, it was the second time. The first was the Chuck Berry debacle. That was mainly due to Berry's towering meanness. In the case of Little Richard, the majority of the blame must rest with the people who brought in a potentially top line act like Little Richard and his Band, then saddled them with a Mickey Mouse P.A., joke continuity and a terminally ham-fisted stage operation'.


(I believe the Chuck Berry gig at Lewisham referred to was also in 1975 - when Berry died earlier this year, Boy George tweeted that he 'met him outside Lewisham Odeon in the 70s').


This post first appeared on Transpontine, please read the originial post: here
People also like
The New Acropolis Museum, Athens (Top 9 Tips)
The Search for Santa: where you can find Santa’s Grotto in London
Play It Loud: The Instruments of Rock & Roll @ The Metropolitan Museum of Art NYC
Stepfather guilty of killing 5-year-old boy because of lost shoe
Terry Pheto stuns at A United Kingdom premiere (Photos)