A brief remembrance.... The 1972 Miami Dolphins- The Only Perfect Season! 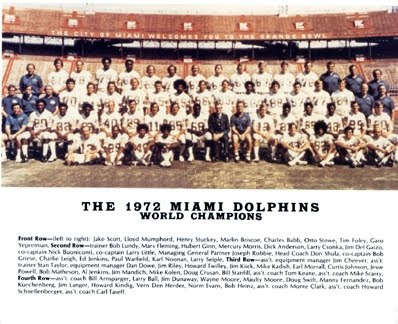 The first airplane I ever went up in belonged to Dolphin's Center, Jim Langer.  My brother-in-law actually taught him to fly.  I remember one day, the phone rang and I answered it...I was probably about 8 or 9 years old.  It was a nice man who wanted to speak to my brother-in-law (who happened to be there).  I found out later that it was Jim Langer.  I got SO excited!  Couldn't believe that he had called OUR house and I had Talked to him!

What to wear: outfit ideas for Christ…
how to control your thoughts - lovelc…
Karen Wiesner: I Have Dreamed a Littl…
Everything5pounds review: Is it Legit…
Best Home Sauna To Stay Warm All Wint…
I sat next to Bob Griese once at a UM baseball game back in...oh...1983.  I thought that was pretty cool.  I've heard Mercury Morris used to shop at Sunset Corners (back when there was also a grocery store there, not just the liquor store).  But the guy I wonder about is Garo!  #1 !!!!  Wonder what he's up to?
Anyway, so many great Memories of that team...the way they brought Miami to it's feet...giving us something to really, REALLY be proud of and cheer about.
6 players from the '72 Dolphins team have been entered in Pro Football's Hall of Fame: Larry Csonka, Nick Buoniconti, Bob Griese, Jim Langer, Larry Little, and Paul Warfield. In 1997, Don Shula joined them.

There never has been, nor will there ever be, another team as great...as fun...and as perfect as those '72 Dolphins!

Here is a link to my main blog where I had talked about them before...Fun Monday- Miami Dolphins