The Ways of Nature

One of the things I enjoy about the rowing club is that we always have plenty of wildlife to see along the river. This spring there was a nesting killdeer (a small Bird in the plover family) near the boathouse. She laid eggs in the grass, but they got run over by the park district’s lawn tractor. Then she tried again, carefully building a nest with tiny pebbles at the edge of the gravel path between the boathouse and the dock. One of our club members noticed the nest and put traffic cones around it. My husband took a photo. 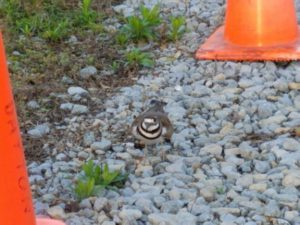 Because of the cones, the eggs (there were two) survived a large weekend Learn-to-Row class when several boats were carried to and from the dock multiple times. The story does not have a happy ending, though, because on the Tuesday after the class, early morning rowers found that both the eggs and the bird had disappeared. A predator evidently got to the eggs overnight, and possibly ate the bird too, although I think it’s more likely she just flew away because there were no bones or feathers anywhere nearby.

The ways of Nature can be hard. Small birds that lay eggs on the ground generally have a high failure rate for the nesting season. Perhaps the killdeer will have better luck next year; but I was left feeling glad to be a human in a safe, comfortable house.

The Ways of Nature

Subscribe to Meg Evans – Stories And Musings On Modern Life