You Hear Me, Baby? Hold Together! 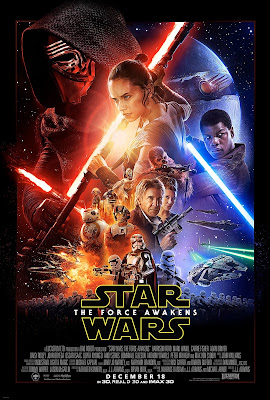 The difficulty with Star Wars: The Force Awakens is not in the film itself, which is just fine, but in the galaxy of anticipation and expectation and baggage that many of us bring to the experience. We almost need two reviews: one for those with the baggage and one for those without.

And they'd be different reviews, if only slightly.

I was 14, soon to be 15, when the original Star Wars came out. This is right in the butter zone of the audience target, and I was duly smitten, seeing the film something like 15 times over the next several months. Sometime earlier I remember seeing a trailer for Stanley Kubrick's 1969 epic 2001: A Space Odyssey and being giddy to FINALLY see a great space movie, only to feel... underwhelmed when there were no starships or booming space battles or laser blasts or aliens or anything I expected. Apes. There were apes. I remember thinking "What the fuck IS this? Did somebody screw up the edit?"

In retrospect, there's no contest as to which is the better film. But at 14 I wanted Star Wars, and A New Hope was a thrilling experience for me. (As an aside, it's interesting to watch the film now and see how much has changed--when I was SURE my opinion of it could NEVER change!)

But this all raises the question of for whom the subsequent Star Wars movies were aimed. The original sequels (V and VI) were easy enough to swallow as continuations of the original story (well, yes, there were the Ewoks). But the prequels of the early 2000s missed their marks on a number of fronts, leaving us to wonder what approach any further films might take--or should take.

Well, wait no more. The Disney juggernaut purchased the rights to the Star Wars universe in 2012, and J.J. Abrams (a couple of Star Treks, a couple of Mission Impossibles, a bunch of other stuff) is the first director invited to continue the franchise and his effort, The Force Awakens, is here.

I decided there's little point in avoiding spoilers, since everyone will have seen it soon enough. So you are forewarned--SPOILER ALERT!--I just wade all over the story here.

It's 30 years after the close of Episode VI, Return of the Jedi. A few things are presumed (details scavenged from the otherwise-discarded Known Universe): Han and Leia became a couple and had children. Luke formed a Jedi school to rebuild the shattered order. All this has come and gone in the intervening years. The hated Empire has reorganized into the First Order, an entity indistinguishable (for our purposes) from the Empire.

The film opens with our being introduced to a couple new faces, junk scavenger and ace-pilot Rey (Daisy Ridley) and ambivalent Storm Trooper Finn (John Boyega). Oscar Isaac plays Poe Dameron, the Republic's best pilot, who with his feisty sidekick droid BB-8 has taken possession of a secret map that shows the location of the disappeared Luke Skywalker. The plot will bring these three into contact and collaboration. With Darth Vader and the Emperor gone, the First Order is overseen by a new Supreme Leader, Snoke, and the day-to-day operations are run by the very Vader-like Kylo Ren. Luke's disappearance appears to have something to do with the current malaise. The more things change, the more they stay the same.

First, the good stuff--and it's mostly good stuff all around. The film is beautiful to look at, and it has (in updated fashion) just the stuff to fire the young kids' imagination. Planets and starships and strange creatures and epic battles. Rey lives inside the hulk of a piece of Imperial war junk, and spends her days scavenging the immense ruins of starships crashed in the great battles of the previous films. Abrams keeps everything boiling along at a brisk, but not too-brisk, pace. The primary trio of new cast members could not be better-chosen. Daisy Ridley especially as the film's primary character is fantastic. She is young and has the naivety of her inexperience, but she is in no way helpless or weak. Indeed, she discovers her skills virtually without tutoring--something not Anakin nor Luke nor Leia ever achieved. As an actor, she has the innate ability to show the contents of her mind effortlessly on her face, which lets us follow her closely on her adventures. John Boyega's role is ambivalent by design, but he proves the perfect companion: chivalrous, capable, and essentially good. But he's in need of motivation and direction. Oscar Isaac plays a smaller and more archetypal role in this film--hotshot pilot--but the stage is primed for more substantial things to come, I suspect.

And the old characters make their appearances as well. Han Solo and Chewbacca are prominent characters, and Princess (now General) Leia Organa has a bit of screen time. We're treated to brief appearances from R2-D2 and C-3PO, and Luke does show himself at the end--for two wordless minutes. But it's really the young folks' film, and their franchise moving forward.

(I hesitate to mention it, but I found Carrie Fisher's appearance utterly distracting. I fear a double standard at work here where I can celebrate Han Solo's aging and grizzled appearance but not Leia's. But I insist it's not MY refusal to let her age gracefully; somebody--either her or the studio or whomever--clearly wanted her to look younger than her 59 years. She has been so extensively Botoxed that her face is virtually immobile throughout the film. Almost shockingly so--only a wired-shut jaw would have completed the job. Her upper lip is especially troublesome, looking like some kind of plastic surgery reconstruction in its refusal to move. At all. It's like she's had a clear plastic mask fused to her own face. Personally, I'd be very happy to celebrate the REAL 59-year-old Carrie Fisher, but perhaps that person doesn't exist anymore. Maybe in a twist of reality they could use CGI to restore mobility to her face?)

The John Williams score has its moments, but I'll typically need to spend more time around it before I can decide if I like it or not. A part of me wonders if they don't need to head in a completely different direction here.

And what of the not-so-good? I was kind of struck as the story went along how closely this film follows A New Hope. It's almost a remake. A relative nobody (Luke originally, Rey here) is faced with epic decisions and the trials help her (him) to find herself. The Old Guard seeks new kids to carry the torch. A feisty droid sidekick provides comedy relief. "Business" meetings happen in seedy bars with "hip" music and a menagerie of aliens. The bad guy is really a fallen good guy, and our heroes alone know it and make it their mission to turn him back to the light. These elements still work, but there's a slight lack of freshness to the story. And because of the tie-ins to the previous films, the story is necessarily more complicated and multi-stranded than the almost comic-book simplicity of the original. I understand that it has to be so, and that there's no way to write a story that hits everyone's bases; but THIS story doesn't improve for this complication.

But no matter. I was thrilled to go and am already plotting my next viewing (in Sydney, if it's open there.)

We know that the next two sequels are already in the works--the filming is already underway for the next film--and I'm already eager to see how Rey and Finn's story progresses, and what role Luke will play going forward.

And the grade? For those of us yearning, perhaps irrationally, for anything Star Wars I'd give it an A-. It's a very worthy fix, and a great start to a new franchise. Without this prime for the pump, it seems a B film.

You Hear Me, Baby? Hold Together!