Life is a closet

A few days ago, Sean and I decided that it was finally time to clean out our Closet. We figured it to be a grueling task since there were still unpacked boxes from the move into our house 3 years ago in there, as well as an accumulation of additional crap over that time span. When we needed to store stuff or had something that we didn't know what to do with it, we just shoved it into any available nook and cranny we could find in the closet, and it began to just pile up. I wasn't looking forward to the task initially. I mean, our closet isn't exactly small. It's a deep walk in closet with lots of shelves at the back that were chocked full and weren't even visible due to the piles of other junk in front of them. But I was excited to some degree that we had decided once and for all to just do it and be done with it. It was long overdue, and I knew the feeling of accomplishment once it was done would feel like a burden lifted.

So we put on some good music, rolled up our sleeves at about 8:45 that evening and started attacking it. An hour into cleaning, it seemed like we hadn't even made a dent in the mess. In fact, it appeared to be growing. The disaster that once lived in the closet, was gradually becoming the disaster of our bedroom. But we had some good laughs. We came across some funny pictures, hillarious birthday cards, and even our old disassembled sex chair in its carry bag. We had some hysterical memories with that thing. "Remember this?!..." Sean blurted out. We both started giggling.
We focused most of our attention on going through boxes of old photos, keepsakes, mementos, and high school memories... things that we hadn't touched since we got married 6 1/2 years ago. As I was sorting old greeting cards, Sean chimed in, "Hey take a look at these..." He had found a shoe box full of hand written notes and greeting cards from me to him from high school and college. I started going through them. Most of them were sappy, but as I was reading one, tears began to well up in my eyes. It took me back to when I was so in love with Sean, yet didn't know him nearly as well as I know him now. It was so surreal to recall how I felt about us back then. I was so innocent, needy and thrived off of attention and affection from him. Thinking about it was like remembering a movie I had watched in the past. It felt like those kids weren't us. 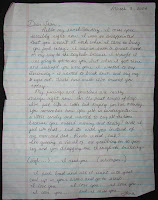 I laid the note down on the bed in front of Sean, and he began reading it. He sniffled and then turned his head to look at me. We stared at each other in amazement for a moment, then he leaned in and gently kissed me.
"I love you one hundred times more now than I did then," I said. "I know. I feel the same about you, baby," he replied. I broke focus and looked around at the massive mess that was around us. It was getting late. Boxes, trash and piles of items filled our bedroom. It felt a little overwhelming to see how much we still had left to do, and yet the reminiscing made it enjoyable. I shared with Sean how happy I was to be there with him going through memories of our past. Despite the task at hand, we were on cloud 9. Just seeing visuals of our growth and the stages we have gone through to get where we are now was remarkable. 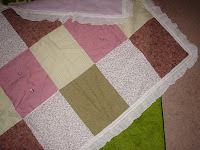 Sean went in the closet and brought out another box that was sealed. I cut it open and immediately broke down in tears. I pulled out the crib quilt that I sewed by hand for our first born while I was pregnant with her.  We felt at the time like she would never arrive, and now my baby is 5 years old. And my youngest already 3. Neither of them are much of babies any more. We looked at pictures of my oldest when she was new born. There is no feeling that compares to bringing home your first baby with the person you are madly in love with. Looking at the child and knowing the two of you made that in love is just mind boggling and gives you chills. We were so clueless at the time, but we figured it out together. That moment was so pure, and it is gone from us now. It is but a memory. We are at a new place, and everything that has occurred between then and now has grown us up as individuals and as a couple.
Sean walked over to the computer and changed the music over to a James Taylor album, a favorite of both of ours. He suggested we take a little break and I agreed. Our bedroom light is on a dimmer switch, so I dimmed it for some mood lighting and we came together in an embrace. There we began to dance.


One slow song played. Then another. And another. And another. We didn't exchange one word. Rather we just soaked up that tender moment right there in the midst of the chaotic clutter. We read each others thoughts and anticipated each others moves. He led and I followed in silence, and there in that moment nothing else mattered, no one else existed, and time just stopped for us. As we were finishing up our last dance, we kissed. Then we turned up the light to finish cleaning and organizing. The rest of it seemed to go rather quickly. We hauled the bulging bags of trash out, returned the newly organized containers back to the closet, looked over the closet with approval, and quickly settled into bed.
It was 1:30 in the morning when we finished up, and we were exhausted. It felt good to have accomplished all that with Sean, and I actually felt like I would sleep better. By the time I crawled into bed and cuddled my body up to his, he was fast sleep. I pulled his arm over me and laid there, thinking about the evening... and then it dawned on me how our closet is exactly like life.
Life gets cluttered and even dirty sometimes because we don't care enough in the moment to be wise about what we do with our stuff, and before you know it, you have one huge overwhelming load to have to deal with. Life in general is overwhelming. Whether you like it or not, you have to deal with it because it doesn't just go away. Messes don't clean up themselves, and if you aren't making a point of keeping things in order and filtering through things daily, it will certainly pile up on you and make sorting through it an even harder task when you do finally get to it.  But when you have someone helping you stay focused and encouraging you, it makes dealing with it a lot easier. Along the way, there will be a lot of garbage you encounter, but a lot of truly amazing things as well. If you focus on the good points and keep a happy way about you inspite of the difficulty that is life, it makes the journey worth while. You will seem to not mind the difficulties because you realize without having to sift through the trash, you would have never found the treasures. It may have taken longer than you were anticipating to get it to your liking, but when you finally do, you find that the things you kept were the things that truly mattered the most to you. You can move around much better in life and find the answers nearly effortlessly IF you do a good thorough job. You will stand back and look at your work, and before the light goes out, you will evaluate the job you have done. Maybe you can sigh a sigh of relief that it is finished and you are pleased with what you have created, thus allowing you to rest peacefully. But maybe you cannot. I suppose it would be a rather dissappointing feeling to not be pleased with the job you did... to have the light go out knowing there was still more work that needed to be done. I imagine there wouldn't be much sense of accomplishment or rest that would follow. You would be likely to feel like all the hard work was in vain which would be rather depressing.
The moral... You only have so long before the light goes out and you have to be laid to rest. Don't wait too late before you start cleaning up your closet. And remember, if you focus on the treasures and not the garbage, it makes the journey easier and worth all the hard work.

Life is a closet