What We Lend Ourselves 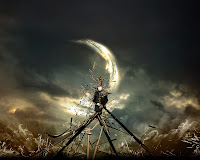 Whenever I attend company meetings, they usually begin with some sort of icebreaker, but, most often they are just led off with a simple introduction consisting of your name, position, and years with the company. Within the context of the workplace, that seems to be what people need to know of us. It’s how we identify ourselves, at least in that setting.

But, let me ask a question: how many times have we been asked in some social setting, or upon meeting someone for the first time and getting acquainted with them, “What do you do?” Now, think about how many times you have replied to that question by giving them your job title. Then, think about how many times you have followed that up with either a brief explanation of your position or vocation, and how often it is—real or perceived by yourself, or others—a rationalization or justification for, or aggrandizement of your work.

I know I have been guilty of this, more so at certain times in my life than others. I remember when I was younger and always wanting that next rung on the ladder, I often felt like I had to explain why I wasn’t already there, or at the very least display a pride in where I was and what I was doing. Men, I think, tend to see their reflected self-image in how much we are valued in the workplace, or as a breadwinner. It’s one of the saddest norms we inflict on ourselves.

It took me years of life experience and contemplation to piece this together. But, one day, it occurred to me: I am not my job.

At too late an age, it finally occurred to me that I had spent a great deal of my adult life constructing self-assigned importance and significance, based mostly on the wrong things. It was a false identity. Or it was an incomplete identity. It was a distorted mirror image. It was ignoring so many other things about what I truly was, as a person. It was denying myself of so many pleasures, both guilty and innocent. It was like living a dual life, at times, where at work I would be one person, and off work I would be someone else. At other times, I let the work persona impact and define my personal identity, and personal time, and personal actions.

It was also a part of what many of us do in order to brace and secure ourselves as what we perceive as a threatening, or overwhelming world. We school ourselves for careers, then find jobs based on compensation, and search for mates, and build families, and buy things—some needless—in order to build layer upon layer of protection between ourselves and what our culture has taught us as failure, or despair.

A job puts food on my table, and beyond that, buys me things. A mate gives me a partner with which to fight against the rest of the world, or withstand its blows. Children give me a sense of immortality, a feeling that I will live on forever even after I’ve abandoned my own mortal coil. Material things give me comfort and status, or, at least they do if I allow them to do so, or believe them capable of it.

Sometimes, I’ve even argued Maslow’s Hierarchy as a truth by which I need to live my life, that if I just accomplish this one thing and fulfill this one need, then I can move on to the more important, substantive, and altruistic levels.

My perspective on all that, however, has changed with my age. I’ve taken the time to look back over my life and have an internal dialogue about what I have liked and disliked about it. I’ve taken stock of what I have and have not accomplished which really matters—as if any of it really matters at all, because, in the end, maybe none of it really does. Our time on this earth is but a nanosecond in the eons of continuum that have come before us, and (hopefully, so hopefully) after us. In that comparison, we seem insignificant.

But, we don’t want to feel insignificant, and so we fight against it in whatever way we can. We struggle to make ourselves important in this world on some scale. And, where and when we are unable to do so with our worldly efforts, we do so in our contemplations and creativity. How long have we tried to find the meaning of life, or just of our own lives?

These days I've come to the realization that there are some things inevitable, and irreversible, and that I am powerless to stop them. I find that humbling, in a healthy and understanding way. It helps me to understand how much I do, or do not, really matter in the grand scheme of things. It helps me to accept those things I cannot change, either about the way fate works, or myself, or about others. It points me toward the beliefs of existential nihilism. I’m really not certain there is any true meaning of life, beyond that which we assign it ourselves.

That is where the questions split for me. What is the meaning of life, and what is the meaning of my life. One of those questions I may never answer: the world never has. The second is far more important to each of us, I believe, and is something I wish we would all take more time to consider. If you are like me, you’ll find it an intriguing pursuit full of as many questions as there are answers.

But, when I think about it, and at just about the point I reach the pinnacle of nihilistic thought, I think of my daughters, and remember how I’ve told myself—with sincerity—that they are the meaning of my life. When I have stated that before, I think I have really misstated my belief. Nothing I do gives my life meaning. However, everything I do does, or does not, give my life significance, and there is a vast difference between those two ideas. One would imply that I have some grandiose position in the meaning of life itself, the other, which I find more realistic, means I am important within certain contexts only. That’s not to marginalize myself, or minimize that role my life has; it is the single most important role my life will ever play. However, it is important to my daughters, and makes my own life no more valuable to myself, or others outside of my daughters.

That’s the little catch in my nihilism. I still end up stopping short of believing life is just an absurd game we play from birth to death. It’s a simple idea, possibly too simplistic for others, to believe that my meaning in life is simply in being a father, preparing the girls for facing the world on their own, and possibly living on in their memory and DNA for all my efforts. Still, it’s an attractive thought to me.

Maybe, in the inability (or absence) of being able to grasp the larger concepts, I fall back to what matters to me most, what I most hope would give value to my life. The girls represent that one thing I hope will. It’s my meaning. And nothing else that happens during my borrowed time on this borrowed planet--either because of me, or in spite of me, or all around me—can diminish that significance I assign my life in my eyes. And nothing else motivates me more.

What We Lend Ourselves