Report his profiles, accounts, and any social media where he publicly libels Women OR men that he has decided are his perfect targets due to their being "liberals" "inferior musicians" "button pushers" "junkies" "whores" "homo" "meth addicted single moms" and much more. Most of the women he has defamed and humiliated online are women he attempted to get a date or relationship out of or women he followed or friended before realizing they were not pro-Trump, or women he followed or friended because he followed all the user accounts of a music artist he is jealous of or has a personal vendetta against.

Should the ends justify the means wit…
Ecosusi – 15% off Cambridge Backpack
2 Women Last Seen At Wedding In Calif…
9 Best Pubic Hair Trimmers for Safe &…
Kevin AKA "Stereo Assassin" is Bullying Women on Social Media — He is NOT funny, he's a serial bully. Aside from relentless bullying, he makes threats and puts many of the women he stalks regularly onto Facebook, Instagram, or other sites as a way to "blackmail" the women into doing what he wants. He has also been known to post crude and sexually vile public humiliation towards women who have turned him down or who didn't do what he wanted. Not doing what he wanted can be as simple as not giving a car ride to a location or not helping him with a task he doesn't want to do. He takes photos and videos of his female friends and saves them to use later on, in the instance that he believes they have done him wrong or deserve to be violated for not being his submissive. 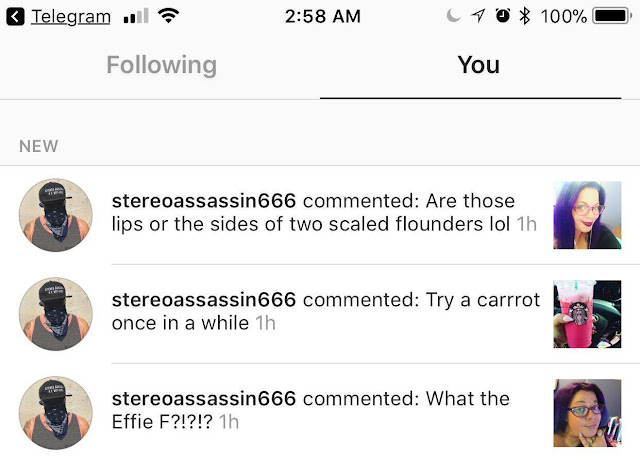 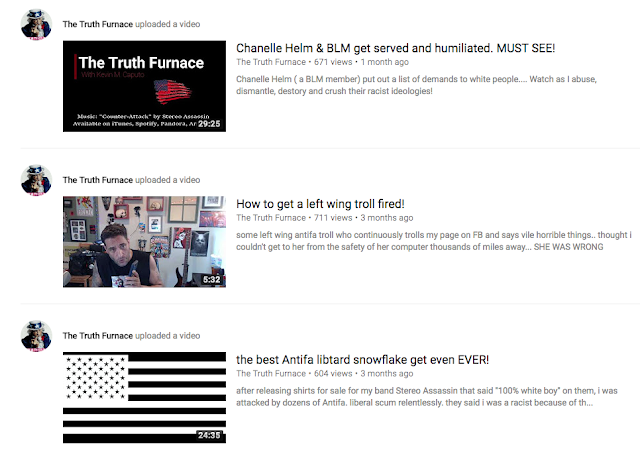 "Chanelle Helm (a BLM member)... ...Watch as I abuse, dismantle, destroy and crush their racist ideologies!"

How to get a left wing troll fired!
"some left wing antifa troll who continuously trolls my page on FB and says vile horrible things.. thought I couldn't get to her from the safety of her computer thousands of miles away... SHE WAS WRONG!"

"i was attacked by dozens of Antifa, liberal scum relentlessly, they said I was racist because..."

His "How to get a left wing troll fired!" video below: 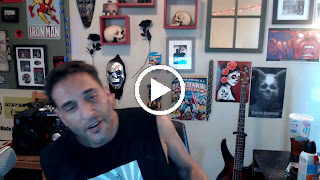 "I'm a down and dirty motherfucker"
This is not just some random dude who stalked and/or harassed a couple of people. For the last few years, Kevin Caputo has made a career out of bullying.

He took revenge on a woman who decided to stay with her husband and family and not continue to have an emotional or sexual relationship with him by calling her place of employment and asking to speak to management; though he is on the other side of the country, he told lies about the woman and asked that she be fired from her job, claiming he had been hurt by her behavior towards him while she was on the clock and he couldn't recover from that pain unless he knew this woman would be terminated. She is a wife and a mother, and yes, she lost her job. In other instances, he called to get both women and men fired from their jobs because they insulted him online after he posted public libel about them. He failed to get them fired but he did make the calls and brag about lying to the supervisors of his victims or to the corporate offices regarding the employment of his targets and his demands to have them terminated. One employer had to lie to Kevin Caputo to get him to stop harassing the company's Facebook page and leaving false reviews—they told Kevin that the person he was claiming he was abused by was let go. This is not true, but it goes to show just how invasive Kevin can be to not only his targeted victims but to their employers, no matter how uninvolved they are with Kevin's issues against their employee. 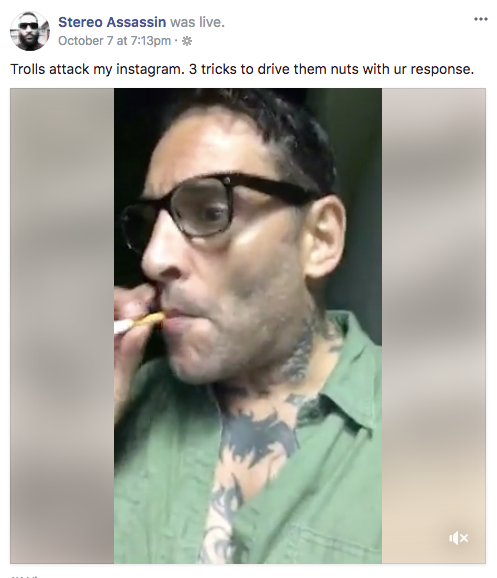 Trolls? Two innocent users Kevin Caputo followed and then attacked aren’t trolls. It's called sticking up for yourself after a bully goes after you. He chose who to bully. He hand-picked his targets because he's a predator. 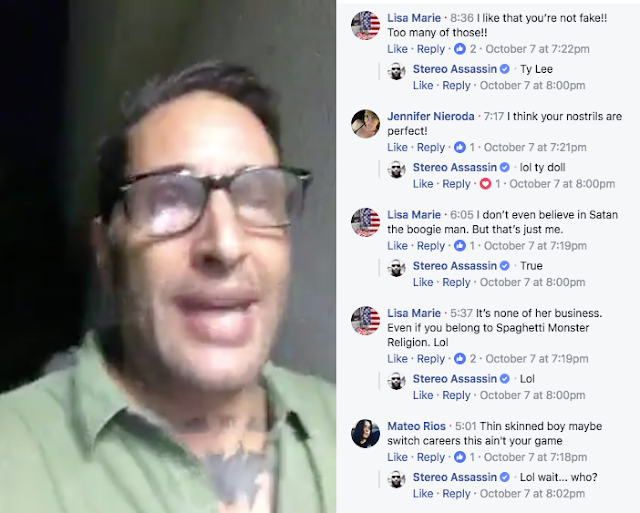 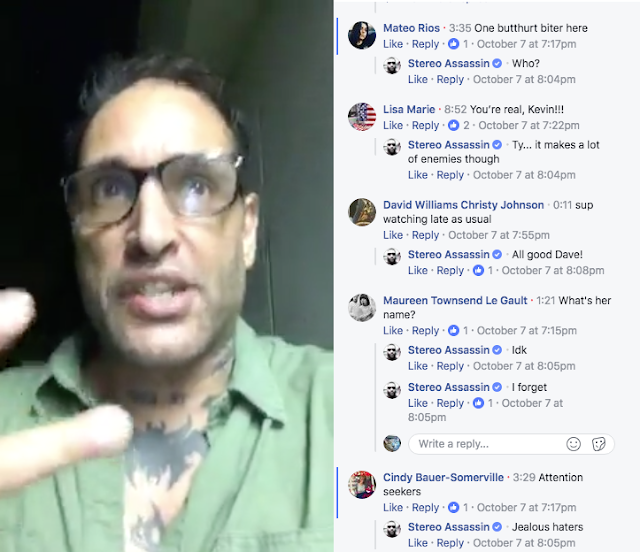 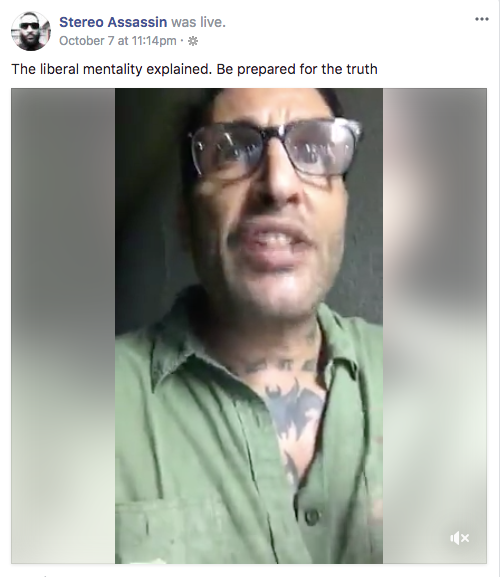 Kevin Caputo deleted these weeks later knowing he was going to lose his Facebook Page. 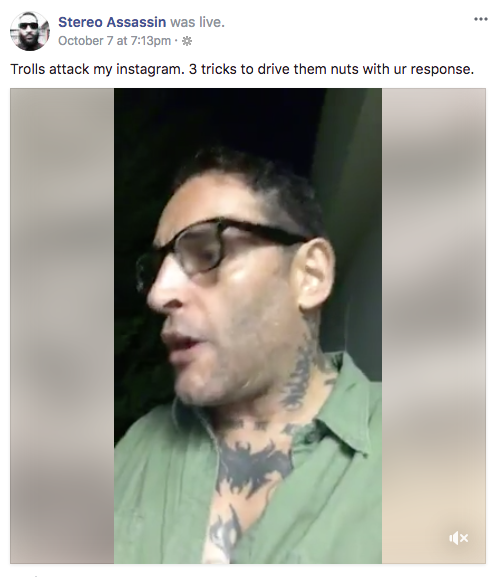 The "trolls" were people he had just followed on social media and had posted derogatory comments to. The "trolls" were complete strangers to this unhinged deviant.
"Trolls attack my Instagram. 3 tricks to drive them nuts with ur response."
"The liberal mentality explained. Be prepared for the truth "
After attacking three users in one night, this is what Kevin Caputo post publicly to his Facebook profile.
For more info that goes back years before this cowardly online stalking bully began to threaten and harass a handful of us women online he had hand-picked from UK music artists and anti-Trump accounts, go here: https://www.facebook.com/KevinCaputoStereoAssassin/
(I'm not affiliated with this page but I found it right away with a simple Google search after he left derogatory comments on my social media.)

Note that the Facebook page was made many years ago. I didn't know this weak bully until some point in 2017 when he decided to follow me and leave comments under a handful of my photos on Instagram, comments that were made simply to harass and abuse me because I do not follow his politics or listen to his music—I listen to his "enemies," in other words, I follow and listen to the people he has attacked in the past and present due to them not wanting to collaborate or sign him to their label—and those are not legitimate reasons to publicly abuse anyone.