Are Guardian Angels In the Bible? 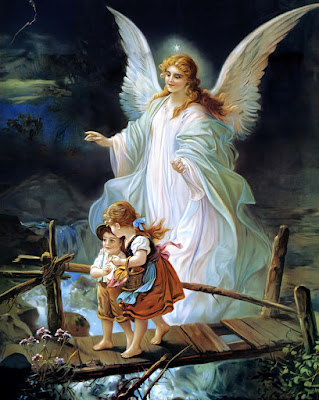 I will admit at the beginning of this post that some people in my life that are really important to me including my mother have asked if it is biblical to believe in guardian Angels or if they are even in the Bible. Is there a Biblical precedence? My mom had always assumed it was true but since receiving my theology degree, she and others have begun to question me more often on long assumed traditions and beliefs including things like the End Times and, well, angels and such. By questioning me they have refined or reinforced their own beliefs. They question me because they trust me to speak the truth on things that matter to them and they know I usually leave no stone unturned.

As for guardian angels, my mother had even gone to the extent of put an old painting from Lindberg Heilige Schutzengel above my bed (as above). It is a guardian angel protecting two young children walking over a bridge. It will probably be familiar to many of my readers over 40 yrs old.

Well, I am here to tell you that, yes, it is biblical to believe that guardian angels exist even if they are not so named in Scripture. In all likelihood though they probably do not look like the image above. Nearly all of the occasions when they become visible they usually look like regular people (Lot, Abraham, Jacob, etc).

Angels Landing at Zions
LYRICS: Pdot O – Holy Ghost Cry
Artists / Creatives: How to create a …
How come so many Christians don’t rea…
All You Need to Know about the City o…
Jesus’ own words in Matthew 18: 10 clarify this issue pretty well. From Jesus’ very mouth we see an affirmation that angels who act on behalf of God participate in the affairs or mankind…often to protect them.
Matthew 18:10 ~“See that you do not despise one of these little ones, for I say to you that their angels in heaven continually see the face of My Father who is in heaven.
Is this just Matthew’s fanciful understanding of something Jesus said? Probably not. If we go back to the book of Job we will indeed see that angels are often intermediaries between God and men. In Job 5:1 we see Eliphaz challenge Job. How?

Job 5:1 "Call if you will, but who will answer you? To which of the holy ones will you turn?
He dares Job to call on anyone who might answer him and asks him to which of the holy ones he would chose to turn to. Holy ones is plural and assumes this has to be something other than God or man. There is only one other being created holy: Angels. Eliphaz makes a presumption that angels would act as intermediaries between God and Job. As such. This understanding of angels was commonplace in the time of the Old Testament.
It is quite clear that people have angels watching over them. This verse is often interpreted to mean that it is only children. We must never forget that we are all God’s children. At the same time this doesn’t mean that all people have an angel watching over them from the time they are conceived to the time they die either. There is no implication here that each and every person has a “guardian angel” nor can this be found in places like Daniel 3:28 and Daniel 6:22. What it does say is that there are heavenly spiritual beings that are committed to heirs in salvation. The key to this passage and its focal point is not so much the angel but one whom the angel is over…the little ones. The Greek  does not say τέκτων/tekton or children it says μικρὸν/micron from which we get the word mirco or small, little in size, stature, or length.
What should be seen in this passage is the esteem of which the “little ones” are viewed in Heaven by angels. These “little ones” are held in such an exulted position that there are angels commissioned by God Himself to watch over them at times. In other words, the little ones are important to God and being important to God, they are not to be brushed off as triviality. Anything God deems as important or worthy of notice should also be taken notice of by man. We should never disregard the things that God regards as noteworthy. We should never despise those that have supernatural beings as companions, especially when we don’t know for sure when those beings are present or not. We may or may not be entertaining angels unaware.
Although we no longer need an intermediary between God and men for salvation. Through Jesus’ death and resurrection, Jesus now intercedes on our behalf before God (1 Tim 2: 5). But the New Testament (including Jesus Himself) still describe angels as having an immediate ministry to believers, as demonstrated by Hebrews 1: 14: “Are they [angels] not all ministering spirits, sent out to serve for the sake of those who are to inherit salvation?” The passage in Acts 12 is even more distinct and shows a continued correlation between angels and people. After an angel frees Peter from prison and execution. Furthermore, Peter goes to the house of his fellow believers in Acts 12: 6– 10. Those inside don’t believe the servant girl’s report that he is at the door. They reply, “It is his angel!” (12: 15). This statement testifies to the early Christian belief that humans had angels who acted as a kind of celestial double— attached to a person for their welfare. The concept of angelic guardianship and activity in our lives is something we have often left to the imagination.
Additionally, we are exhorted to show hospitality to strangers in Hebrews 13 if for no other reason than the fact that we might be giving that hospitality to messengers of God. The word ξενίσαντες "have entertained" or showed hospitality below also carries with it a sense of astonishment and startled surprise. This of course should not be unanticipated, as anyone who ends up encountering supernatural beings tend to become unsettled or stunned. I know I did. When in is the presence of God this bewilderment is infinitely more powerful.
Hebrews 13:2 ~ “Do not neglect to show hospitality to strangers, for thereby some have entertained angels unawares.
We know encountering angels is not only possible- it actually happened to people in the Bible in their ordinary lives. When it did happen, it most often made those ordinary lives extraordinary just as it would today. When God sends His own personal messengers to you, you had better believe that something huge or momentous is afoot and moving about in your life. When the people encountered the angels in the Bible, sometimes people were aware they were in the presence of the supernatural and sometimes not. Sometimes they initially didn’t know but came to an awareness of the fact in the course of the events that unfolded.

The bottom-line is that there is a clear pattern in Scripture to affirm that God does indeed have angelic assistants that actively work on our behalf in the spiritual and physical realm.
Some other New Testament passages concerning the early church that stand out in support of the idea of guardian angels are as follows:
[Acts 8:26-39] The Angel of the Lord told Philip to go to Gaza. There Philip met and converted the Ethiopian eunuch.
[Acts 10:1-8]An angel appeared to Cornelius, telling him that God had heard his prayers and that he should send to Joppa for Peter. The angel said Peter would tell Cornelius what he should do.
Paul, sailing to Rome to be tried before Caesar, was in a storm for two weeks. The Angel of God appears to Paul and tells Paul that he must be brought before Caesar [Acts 27:21-25]. The Angel tells Paul not be afraid for he must stand trial before Caesar; and God had graciously given him all the lives of those who sail with him. Paul then exhorts the men to maintain his courage because Paul believed in faith that things would happen just as God had told him.

Are Guardian Angels In the Bible?