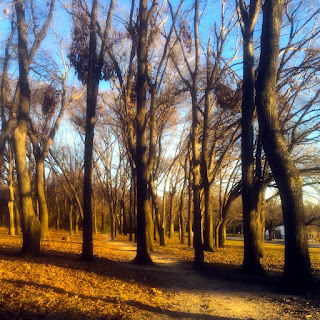 What day is it? Ever since Christmas, it's been hard to tell. I don't think anybody has gone back to work yet. There are more people in the park than usual, but the roads are surprisingly empty. I went back to the hotel for breakfast this morning and for a while, I was the only one there. I guess the holiday travelers have gone home and the business travelers haven't arrived yet. I had the same experience at the grocery store a few hours later. Oddly. I had to go out again this afternoon and this time there was a ton of traffic. I'll be glad when the world becomes predictable again.

The hotel has one of those open kitchens where you can watch the chef cook. While I was waiting for someone to take my order, I heard the head chef say "who made this batter?" He looked disgusted and threw it away. I was glad he intervened because I was going to have French Toast again and that batter was for me. The French Toast was delicious again, but I can't eat as much as I used to. Once again, I wish I could order a child's portion.

I had to take a few things to the storage warehouse today and while I was there I tried to see if there was a way to rearrange things to create more space. Nope. I think the place is pretty full. I need to find more space because I don't think the keyboards I have on consignment are going to sell. It's been a year and they haven't gotten much attention. Apparently people don't get as excited about vintage keyboards as they do about vintage guitars. At least this storage warehouse is heated, so if the keyboards have to come back they won't get ruined again.

It was a good day for a walk. It was a little chilly, but the sky was clear and the air was dry. I saw an older guy pointing a camera with a long telephoto lens at some nearby trees. "Are you looking for the owls," I asked. He was, but told me that he hadn't seen any in months. I hadn't either. I asked him if he had photographed the pelicans yet, and he said he was already bored with them. "Are you a birder too" he asked me. Nope. I do see a lot of birds though. Now, I'm wondering where the owls went as well. A few years ago the city even rerouted a bike path around where the owls used to live because it was considered a well known habitat. Now, all the owls are gone. There are plenty of pelicans though. I've never seen this many before.

The Quadrantids meteor shower peaks tonight. As someone with an interest in these things, I should set my alarm clock for 4 AM and get up to take a look. I probably won't though. I've done this before any usually see nothing. There is just too much light pollution in the Dallas area. Even in the middle of the night the sky isn't black. It is kind of a light gray color with a few bright stars poking through. The only time I've actually seen meteors is when I used to walk Dot and Dash before daylight on days when Janet had to go to work early. If I wake up to go to the bathroom at the right time, I might go outside for a while. Otherwise, I'm going to sleep as long as I can. When I have to choose between astronomy and sleep, sleep usually wins.

Although it has seemed like Saturday all week, tomorrow actually is Saturday. I will fill the car with gas, get more fresh fruit for my smoothies, and do all my other Saturday errands. I could have done all this stuff today, but I'm a creature of habit. Saturday errands need to be done on Saturday.