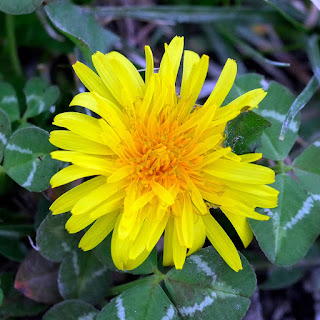 Dash had no desire to get up this morning. Neither did I, but I knew I had a limited time to get him outside to pee before he wet the bed. I finally managed to get him out of bed, but as soon as he went outside and did his business, he headed straight back to the bedroom. He knew it was a rainy day and he wasn't going anywhere. Since I couldn't make the bed with Dash in it, I went to the kitchen and fixed my smoothie instead. I thought Dash would follow me to the kitchen, since he's always interested in food. He didn't budge. He has to take his morning meds on a regular schedule, so I took the pills and some sliced ham back to the bedroom with me. I rolled each pill in a small slice of ham and fed them to him one by one while he was lying in bed. The fact that he took the pills let me know that he was just being lazy. I suspect that he knew that Janet had already left for the morning and he could get away with anything with me.

Usually Dash poops right after he's taken his morning pills, so I was reluctant to leave him unattended for very long. I kept checking on him every few minutes as I was having my own breakfast and luckily I managed to catch him just as he was getting ready to poop. I quickly slid a puppy pad under him and made the save. No mess this time.

When I finished my smoothie, I went up on the roof and made sure the pumps were working before the heavy rain I saw on the radar arrived. These pumps help keep the water level on the roof from getting too high when it rains, but they are finicky and always seem to get clogged at the worst possible time. Luckily, I was able to get both pumps working today.

Dash's morning walk didn't take place until noon today, but at least he still got one. There was a light drizzle, but we didn't get too wet. After Dash's exceedingly lethargic morning, I thought that he wouldn't even want a walk. I was wrong. These slow, stumbling, and often aimless walks are the high point of his day.

Janet added me to her Costco membership last month, so we went to the store after lunch so I could get my membership card. Their card printer was broken, so I'll have to go back later. I'd never been to a Costco before. This one seemed like a giant Sam's Club with a more upscale suburban customer base. It was a little bit overwhelming. I'll probably continue going to Sam's.

Today's rain was strong enough to be a legitimate test of the roof repairs. Fingers crossed. I will be watching the ceiling very carefully for the next few days looking for signs of moisture. I've learned that the water doesn't always appear immediately. Sometimes it can take quite a while to find it's way inside.

I actually got a decent amount of sleep last night. Hey, lets go for two day in a row. There's still a lot of catching up to do. All I seem to think about these days is sleep and food. Of course I think about water on the roof and dog poop too, but you get my point. Life has become very simple. I suspect that life was always pretty simple. I just didn't realize it when I was younger.