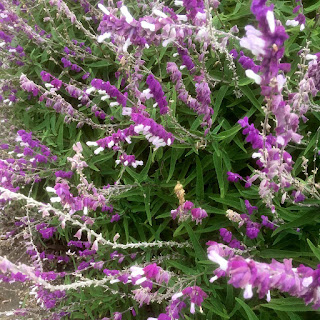 Winter is here. We woke up to near freezing temperatures this morning. We found our Winter coats and took Dash on his morning walk. When we returned, we discovered that our power had gone out. Why would the power go out on a completely clear day? I suspect that everyone woke up and turned on their furnace at the same time. Since nothing was working, we went out for breakfast. Restaurants in the neighborhood were out of power too. This was worse than I expected. We drove a little further and ate breakfast at my favorite restaurant in the hotel. Janet liked the place too.

Power was restored later in the morning, but that wasn't the end of today's mishaps. When I left to run my Saturday errands, the first thing I did was get gas. After I filled my tank, the car wouldn't start. It was completely dead and there were all kind of warning lights on the dash. I called AAA and they got me to the dealership, where I discovered that I not only had a dead battery, I also had a broken water pump. Damn. Another expensive repair. My service adviser got me a loaner car and said that he might be able to complete the repairs by the end of the day. Land Rover prices are ridiculous, but at least they have good service.

I continued my Saturday errands in the loaner car, hoping that I never have to buy a car where the engine automatically shuts off when you stop at a traffic light. This "feature" is included on almost every new car these days and it is terribly annoying. After a lifetime of worrying that my car is going to die in heavy traffic, the last thing I want is a car that does this on purpose.

I should have checked the weather last night. I forgot to bring the lawnmower battery inside, so last night's cold weather probably ruined it. I'll see if it still works the next time we get some warm weather. This may be tomorrow, or next Spring. You never know with Texas weather. I suspect that the cold weather might have had something to do with my car's bad battery as well. Why did the car start when I left the house with a cold engine, but refused to start after I got gas and the engine was warm? Why did the car work at all with a broken water pump? Some things will always remain a mystery. I suspect that any car can be on the verge of breaking down for quite a while before it actually does.

I found another pair of dog boots that seemed softer than the ones we've been using. Neither Janet or I could remember where these boots came from. Perhaps they were Dot's. Dash's paws didn't bleed today, so these boots are a winner. I don't think they'll last long though, since the rubber on the outside is thin and soft. Maybe I'll just have to buy new boots every few weeks. Repairing torn areas with Shoe Goo tends to make the boots harder and more abrasive on the inside. I guess I shouldn't worry about what the boots cost. They're cheap compared to his veterinary bills.

Amazingly, the dealership did finish my car today. Everything works great now. I hope I can rely on the car for the rest of the Winter now. After switching storage warehouses and hiring movers, I think I've had enough large expenses for the rest of the year. Dash pooped on the bed again last night. I've had enough of that as well. At least we're getting better at cleaning up the mess. In less than fifteen minutes, everything was clean, in the wash, and we all went back to sleep again.