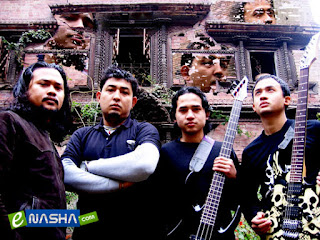 Nepal? Really? The hardest letter of the A to Z 'X', and I find a
heavy metal band in this little Himalayan  nation of just over 20 million people. Well why not? These Kathmandau homies (Rojesh Shesthra on vocals, Sandeep Tuladhar, guitars, BJ Shresthra, bass, Bikram Shrestha, drums, and Nabin Mahajarn, guitars) got together in Y2K and have been rocking the subcontinent with their thrash metal ever since.


I back my van up to the loading dock with the metal tunes blaring to gain the attention of the backroom boys at Chemistwarehouse. In fact the music does not do the trick so I press the bell, and talk with the young fellow who opens the door for me. Turns out he's a metal fan too. 'Do you like Trivium?' he says. 'Never heard of them," I reply.

Next time I rock up to collect their used syringes- a job I did with distinction for many years- the young headbanger has a disc for me. "Have a listen to this," he says.

The disc was Ascendancy, and as a result of it and the generousity of the guy at Chemistwarehouse, I became a Trivium fan. The year was 2007, and the band was between releases Shogun to come, featuring one of Trivium's all time classics, Down from the Sky, and The Crusade which in my opinion is one of the best heavy metal albums of all time.