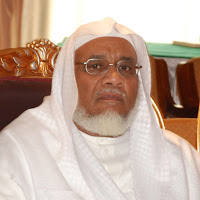 IBRAHIM Al Akhdar, or Ibrahim Ibn Al Akhdar Al Kayim, is a famous Holy Quran reciter through the Muslim World. He also represents a great imam and outstanding social character. The Great Allah has given him an extraordinary voice that has a unique and exceptional harmony in it. Ibrahim Al Akhdar was born in 1364 (1945) in Al Medina in Saudi Arabia.
The Honorable Sheikh Ibrahim Al Akhdar started and finished his primary and secondary schooling with great success, in his native city “Medina” in the Quranic school of Dar Al hadith, then ‘Annajah’, and then the scientific institute.
Later on, he attended the industrial school which a well known high school in the area. Regarding learning and memorizing the Holy Quran, the holy book of God, he finished it during his secondary school. He was supervised by the great Sheikhs Ahmed Azayat, Abdu Allah Al Gounaimane, Omar Al Haydari.
Ibrahim Al Akhdar also pursued other studies such as Al Fiqh, Al Aqida, Al Shari’a, and even languages.
Furthermore, the Honorable Ibrahim Al Akhdar went for Islamic studies at the Islamic University, in parallel to his education at the Islamic scientific institute at the Imam University. At the end of this path, the honorable Ibrahim Al Akhdar earned, with an honorable mention, a degree from the same University.
The honorable Sheikh Ibrahim Al Akhdar occupied various positions such as instructor of learning the Holy Quran at Abi Ben Kaab School in Medina City, instructor in the industrial education, and let’s not forget that he was an imam at the great mosque of Al Medina in Saudi Arabia. Finally, he has been attributed the position of an instructor assistant at the Islamic university while he was still a learner at the Islamic scientific institute.
Since he started his career as a talented imam, the honorable Ibrahim Al Akhdar became famous in great famous mosques in his country. As a matter of fact, since the year 1406 of Al Hegira, Sheikh Ibrahim Al Akhdar decided to devote himself to be only imam the holy mosque of the prophet Mohammed (PBUH) in Medina.
The Honorable Sheikh Ibrahim Al Akhdar has a very active sociable life. Indeed, he is a main member of many social and dynamic Islamic organizations. Among those organizations there are: The charitable organization for social services, and local re-free committee of the international competition of the Tajweed of the Holy Quran. He is also a famous figure in Holy Quran learning association, where most competitions take place.
In terms of his private life, the honorable Sheikh Ibrahim Al Akhdar lives a peaceful life. He is a husband and father. To sum up, Sheikh Ibrahim Al Akhdar has organized numerous conferences and provided precious participations in Saudi TV channels. He also produced a large number of audio tapes that contained magnificent Quranic recitations.