Don't Rush To Judge People By Their Appearance 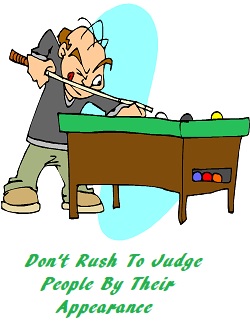 Don't judge people by their appearance:

Years ago, while in the U.S. Army, I was stationed in a small Texas town. My friends and I used to hang out at a local tavern, where we met a local guy I will call "Larry".

Larry was a happy old fellow with a beer belly and a penchant for gambling...on anything. His clothes and speech were those of a working man, apparently a cowboy, and, since he never bet more than a buck on anything, we assumed he was getting by on Social Security, or something like that.

A guy named Charley would try to win money from Larry, and we made a game of winning the money from Charley and letting Larry win it back from us.

One day, a brand new Cadillac pulled up in front of the bar, and a big woman, dressed to the nines, wearing a mink coat (in the middle of Summer), and several expensive looking pieces of jewelry, got out and came into the bar.

Stopping in the doorway, she yelled, "Larry XXXX, get your a** out in the car. You know you got to home and get dressed for the reception.

With hanging head, and muttering under his breath, Larry shambled out to the car and obediently got in.

Seeing the questions on our faces, the bartender enlightened us:

Several years earlier, Larry and his wife were dirt-poor with a small patch of land where they scraped by running a few head of cattle. Then one day, oil was found directly under Larry's land.

You can guess the rest. Larry wasn't on Social Security, he was on an allowance....from his wife.

His wife had used the money to hook into the local social scene and was friends with many powerful people in the area, as well as the governor of the state.

However, Larry was still just a "good ole' boy" who was only happy at the bar, drinking his beer, and playing pool and shuffleboard. Just like everybody else...except for the several million dollars he had in the bank.


This post first appeared on Ravensong Poetry And Writing, please read the originial post: here
People also like
The Mysterious and Majestic Atacama Desert: A Guide to Visiting this Unforgettable Place
NBA Jam Game Comparison
Useful Tips for Building a Stronger Company Culture
How come so many Christians don’t really know God?
Tekashi 6ix9ine Gets Punched In The Head Inside Miami Nightclub, Right In Front Of His Goons

Don't Rush To Judge People By Their Appearance