THE PRIEST AND THE GOAT (Don't believe Everything you heard)

THE Priest AND THE GOAT  . Moral Story (Don't believe Everything you heard) 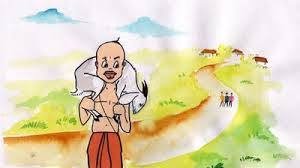 Once, there lived a pious Priest in a small village.  He was very innocent and simple minded person, used to perform religious rituals.  On one occasion, he was rewarded with the goat for his services by a rich man.  The Priest was glad to get a goat as the reward.  He happily slung the goat over his shoulder and started the journey closer to his home.  on the way, three cheats (Thugs) noticed the Priest taking the goat.

They all were lazy and desired to cheat the Priest so that they may dispose of the goat.  They said, “This goat will make a delicious meal for all of us. let’s by hook or by crook get it”.  They discussed the problem amongst themselves and devised a plan to get the goat by fooling the Priest.  After figuring out the plan, they got separated from each other and took exclusive hiding positions at three different places on the way of the Priest.

As quickly as, the Priest arrived at a lonely area, one of the cheats came out of his hiding place and asked Priest in a surprising way, “Sir, what are you doing?  I don’t recognize why a pious man such as you needs to carry a dog on his shoulders?”  The Priest was surprised to listen such words.  He screamed, “Can’t you spot? It’s not a dog but a goat, you silly idiot”.  The cheat answered, “Sir, i beg your pardon.  I told you what I noticed.  i'm sorry if you don’t accept as true with it”.  The Priest was irritated at the discrepancy but began his journey all over again.

The Priest had barely walked a distance, while another cheat came out of his hiding place and asked the Priest, “Sir, why do you carry a dead calf in your shoulders?  You seem to be a sensible individual. Such an act is pure stupidity in your component”.  The Priest yelled, “What? how can you mistake a living goat for a dead calf?”  the second one cheat spoke back, “Sir, you appear to be tremendously mistaken in this regard.  either you don’t recognize how does goat appear like or you are doing it knowingly.  I simply informed you what I saw. thanks”.  the second one cheat went away smiling.  The Priest got stressed however continued to walk further.

Again the Priest had covered a little distance when the third cheat met him.  The third cheat asked laughingly, “Sir, why do you carry a donkey in your shoulders? It makes you a laughing stock”.  listening to the words of the third thug, the Priest have become really worried.  He started out wondering, “Is it really not a goat? Is it some kind of a ghost?”

He thought that the animal he was carrying on his shoulders might actually be some kind of ghost, as it transformed itself from the goat right into a dog, from a dog into a dead calf and from lifeless calf into a donkey.  The Priest got frightened to such an extent that he hurled the goat at the roadside and ran away.  The three tricksters laughed at the gullible Priest.  They caught the goat and were happy to feast on it.

One should not be carried away by what others say. Don’t be fooled by means of those who wants to take advantage of you.
“Don’t believe everything you hear. There are always three sides to a story, yours, theirs and the truth.”

THE PRIEST AND THE GOAT (Don't believe Everything you heard)