Tags: fox reality channel watching prince simply reality glory days ramsay failing restaurant hells kitchen
November 28th 2008
View original
I've stumbled upon a ticklish little corner of television known as the Fox Reality Channel. While probably not available in all markets and on all systems, it is a strange cousin of yet a stranger channel, called "TruTV". Though these channels are devoted to the world's obsession with reality based shows, many other channels dip their lanky fingers into this cauldron of "humansploitation". Discovery Channel, Food Network, the Fox Network, MTV, VH1 and Bravo are leading finger-dippers in this area. The depths to which these networks have sunk has steadily increased. Since there are dozens of reality shows worthy of commentary, I only intend to touch upon a few at a time.


A parting thought - we have the Fox Reality Channel - how about the Fox Realty Channel? Could be spicy! Foreclosures, bidding wars, overzealous agents, and those people that use the bathroom at open houses! Juicy stuff. As Radar used to say..."Wait for it!"

Hell's Kitchen
This one tops the list, and while not necessarily a pioneer in the field, it has the most exposure, thanks to Fox and heavy promotion. It feat

ures the cantankerous Gordon Ramsay, a bitter, foul-mouthed bastard of a Briton, who looks like he grew up in a cigarette factory and has the disposition to match. I reserved judgement on his misanthropic behavior as long as possible, until I started watching him in other shows; suffice to say, he just isn't that nice a fellow. Like most shows, Hell's Kitchen begins its season with a group of aspiring chefs, all hoping to win the final prize of running their own restaurant. Each week, the group is presented with a "challenge", and throughout the episode, the group is d 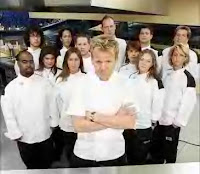 emoralized as if they were boot camp recruits. I never could imagine someone being called a "piece of shit" for overcooking a scallop or adding too much pepper to a dish. I can understand Ramsay singling someone out for stupid mistakes, but does it need to go to that point? He's slammed food into people during a tirade, and thrown food at contestants for messing something up. When it gets into character assassination and physical acts like that, then a level is being crossed that just doesn't belong in the culinary profession. I have no idea how contestants from past seasons have been able to exercise restraint from simply hauling off and attacking the abrasive ass. I'm not one to fly off the handle, but I wouldn't have lasted through any single tirade of his without jumping him. Unfortunately (and it's a big "unfortunately"), stupid people like myself are entranced by the fear that encircles the contestants, and the layer of eggshells on which they dance. Ramsay's abrasive nature, the wide-eyed contestants, and the high ratings, simply prove that we viewers love to see people being abused. Hell, we're sitting in a warm living room watching people suffer, and like sex itself, suffering sells.

"consultant" (with all the subtlety of Godzilla) to rescue and reorganize a failing restaurant. Apparently "consulting" involves yelling at the managers and owner, avoiding any element of civility in pointing out their misgivings, and cursing every fourth word. I'd submit that the "nightmare" isn't the failing restaurant itself, but rather the insane manner in which Ramsay attempts to, um, help the place. Again, it is a successful show, for the same "suffering sells" reason as with Hell's Kitchen.

Real Housewives of Atlanta
I briefly watched this show, and couldn't understand the point.

I easily could figure out why the show was created, since almost all participants were self-entitled, finger-waving black women, full of the "mnuh uh!", "talk to the hand" and "don't go there chile!" aphorisms. Why, therefore, do we need to focus on elitist Oprah-wannabe women, if we have the technology to show some real black housewives? How about "The Real Single Mothers of (anywhere)". Show them chasing their kids around... "Advil, get over here!" "Tylenol, what you doing in the oven?" Bravo seemed to pass on such ideas, and show the Cosby families, not the Good Times families.

The Osbournes
Yes, I understand that this show is already passe with the populace, but it appealed to me for basically one sad reason - the meandering life of all things Ozzy. It would be inaccurate to say that watching him was like seeing a train wreck; rather, it was like watching a train still wobbling along, with missing wheels, its locomotive on fire, and most of its cargo stolen by bandits. 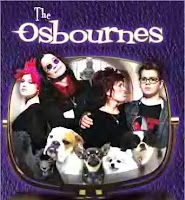 I could always be entranced when watching poor ol' Ozzy, the supposed "Prince of Darkness", cleaning dog crap, taking out the garbage, or trying to figure out where the refrigerator went. Sad and funny at the same time. Worse yet, seeing his children exploit his finances to death was enough to create plenty of personal ear-smoke. A bit of an aside - why, in current commercials, does Ozzy claim he's been the Prince of Darkness since 1979? His music career started many years before that. Just curious. Did quitting Black Sabbath earn him the title? Must have been a promotional move. Be a solo artist now? Well you're a prince of something. Prince had his "Revolution" group, then he was a prince by becoming Prince. Then a symbol. Now even I'm confused. Bad aside. Aside from bad asides...

Hogan Knows Best
A VH1 production, the show captured the viewing public's interest for various reasons. Some were ardent "Hulkamaniacs" from his glory days of the 1980s, and sought anything related to the Hulkster. They never grew out of the classic Hulkster era, and his famous three "demandments" (train hard, say prayers, and eat vitamins). Others simply were hooked on the notion of watching the goings-on of high profile families, known as the "Osbourne Effect". Then 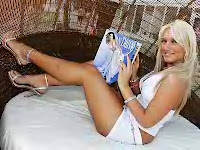 there were the rest, who simply wanted to ogle Brooke, the bright-eyed, blond, bimbo daughter. She was this century's answer to Kelly Bundy. People who know me well enough will likely throw me into this category. Fine! Consider me thrown. Anyway, the recent sequel Brooke Knows Best is slightly less compelling, as she's already starting to resemble her withered mother, and that the element of the family epic, post divorce and his son's arrest, has dissipated. That said, it was good for its time.

Trading Spaces
Ah, to long for the glory days, lo these many years ago, when reconstructing a room wasn't punctuated with that annoying phrase "Move that bus!". Great catch phrase. I'm sure that will unseat "Where's The Beef" in no time. But then again, that is a different show. As for Trading Spaces, the era around 2002 had a small, yet predictable cast of interior decorators (two per episode) 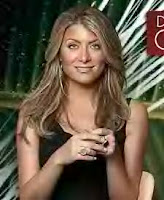 who offered their expertise and personality while helping a couple redo a friend's room. The men featured the ambiguously gay Frank and Doug, with the more palatable Vern as one to round out the crew. The girls featured Hilde, a glamorous brunette with strange sense of design, and the bubbly blond Genevieve, pictured at right, who's my favorite (again, those who know my type...). Like the Brooke Hogan syndrome, many of us red blooded males were hoping the episode would feature one of the ladies, as the rest were too annoying. Speaking of annoying, host Paige Davis was ever intrusive, and one we'd all hope would just go away. Didn't help much when she returned to the show years later.

I'll stop here for now, but there are more to mention! Hope you all had a good holiday!