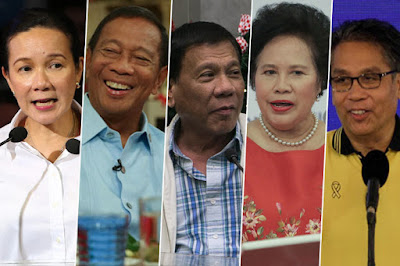 Today is election day in Philippines. I don't believe it would be productive for me to pick one candidate over another. I can't possibly make any sort of informed decision on the election for President; I do not understand any of the Filipino languages well enough to evaluate anything the candidates or their critics are saying. Most of the news reports go over my head as well.

Although I am in no way qualified to advocate for any of the Filipino Presidential candidates, I can give my impressions as to how the election looks to an innocent bystander.

There are five candidates campaigning for the Presidency....two women, three men.

Unlike in the United States, Philippines has had more than one female President. Voting for, or against, a particular candidate because of the candidate's gender isn't the issue here that it is in the U.S.. The Filipinos have too much common sense to elect a President based on the candidate's genitals.

There are similarities, however, with the election for POTUS.

The odds on favorite to win the Presidential election, Rodrigo Duterte has been referred to, by ABS-CBN and Al Jazeera as The Donald Trump of the Philippines.

Trump once said that he could shoot someone on 5th Avenue and not lose support. Duterte's supporters appear to have a similar love for their candidate. Many of Duterte's statements have been as outlandish - or more so - than anything the Donald has said, and it hasn't hurt Duterte with his supporters.

As with the "never Trump" movement in the U.S., the current Philippine President, Benigno "Noynoy" Aquino urged trailing candidates to unite and block Duterte's path to the presidency. Grace Poe, a senator, refused.

Polls opened at 6 a.m. and will close 11 hours later. The election commission chief has said results could be known within 24 hours but it could take up to three days.